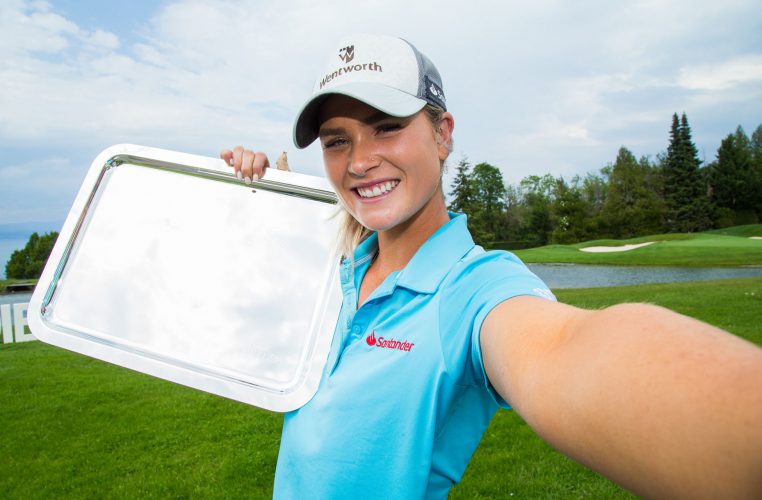 England’s Annabel Dimmock held off French amateur Pauline Roussin Bouchard to win her first Ladies European Tour and LET Access Series title by one shot in the Jabra Ladies Open, as both players qualified for the Evian Championship.

“It’s such a relief. I’ve wanted to do this for so long and I’m so relieved I’ve finally won,” said Dimmock, who ended a five-year wait at Evian Resort Golf Club. “I’ve been struggling a bit over the last few years since I first turned pro so to finally get a win is really special.”

The 22-year-old from Buckinghamshire started one shot behind the 18-year-old from Toulon but birdied four of her first seven holes to gain the advantage.

After Roussin Bouchard birdied the ninth, the duo headed into the back nine tied for the lead and six strokes clear of the field, setting up a dramatic duel.

Roussin Bouchard bogeyed the 10th to hand the advantage back to Dimmock, but regained the lead after a pair of birdies on the 14th and 15th holes.

Then, the crowd favourite hit her tee shot into the water on the par-3 16th and carded a second consecutive double-bogey at the 17th to hand a two-stroke advantage to Dimmock, who had bogeyed the 17th, coming to the par-5 last hole.

After carding a final round of three under 68, Dimmock said: “It was really tough, but me and Pauline came out of the blocks really quickly, and I knew I had to do that.

“I got it to four-under through nine and was playing really well and not making any mistakes and then on the back nine it was tight. I was trying not to make mistakes. It was quite a battle out there and I was disappointed about 17, because I didn’t want to make any mistakes, but it turned out well in the end.”

Roussin Bouchard, who has been a member at the Evian Resort Golf Club since the age of 14 and is a three-time winner of the Haribo Kids Cup, which she has played at the venue since the age of 10, carded a final round 70 and said: “I’m very happy right now and I can’t wait to play in The Evian Championship. It’s a dream come true.”

England’s Meghan MacLaren carded a final round of 69 to finish third on two-under-par, with Camilla Lennarth, Hannah Burke and Olivia Cowan a stroke further back in a share of fourth.

The 25th edition of the Evian Championship, which is the fourth major of the year, gets under way at Evian Resort Golf Club on 25-28 July and both Dimmock and Roussin Bouchard will feature in a world-class field.