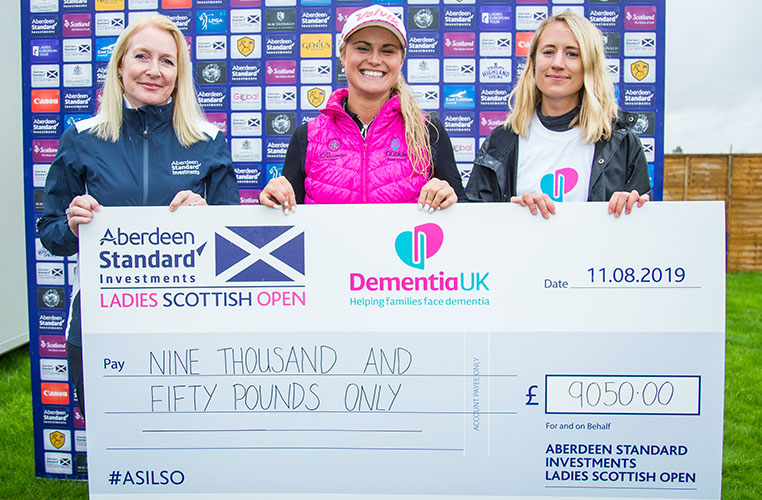 Dementia UK,  who provide specialist dementia support for families through its Admiral Nurse service, benefited to the tune of £9,050 as the Official Charity of the Aberdeen Standard Investments Ladies Scottish Open at The Renaissance Club this week.

Part of that figure came from a ‘Birdie Pledge’ initiative, backed by title sponsor Aberdeen Standard Investments whereby every birdie and eagle made by the professionals amounted to £5 and £10 being contributed to the fundraising tally – totaling £7,566, with 1339 birdies and 43 eagles being made across the four tournament days. An additional 3 hole ones scored by Laura Davies, Cajsa Persson and Jacqui Concolino contributed an additional £441 with £1 being donated for every yard.

The Birdie Pledge contribution combined with the sale of daily prize draw raffle tickets and donations for official draw sheets, contributed close to £1,500 to the total amount, with the remainder being raised through kind gestures made at Dementia UK’s exhibition stand in the tournament village.

Martin Bishop, Director of Fundraising and Communications, Dementia UK, said: “We are extremely grateful to everyone at Aberdeen Standard Investments and everyone involved in the Ladies Scottish Open and the staff at The Renaissance Club for supporting Dementia UK and raising this great amount. The Ladies Scottish Open is a fantastic event with some spectacular golf on a superb course and the money raised through everyone’s passion and dedication is simply amazing. The funds raised will go a long way in helping families facing dementia through our specialist Admiral Nurse service and our national Dementia Helpline.”

Players, spectators and tournament staff helped raise awareness and much needed funds for Dementia UK by turning the tournament Pro-Am day into a sea of Tartan. A number of celebrities and players kitting themselves with a splash of Scotland’s colourful patterns, including BBC News presenter Naga Munchetty, former Scottish football star, Frank McAvennie and players such as Scotland’s adopted American, Beth Allen.

Beth said: “It was a pleasure to be able to show our support to such a fantastic cause in Dementia UK by wearing tartan, as well as contributing to the fundraising through the Aberdeen Standard Investments Birdie Pledge. I’m delighted to hear such a great amount has been raised through the event.” 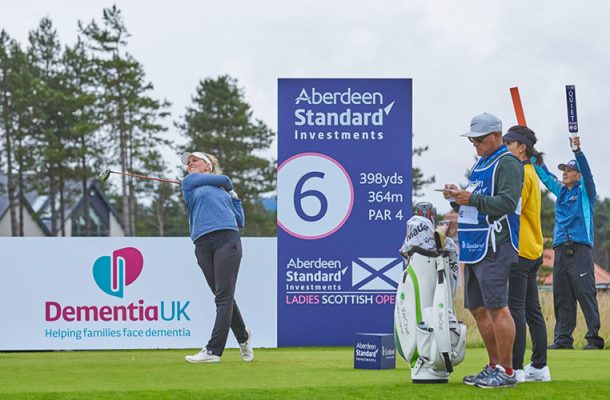 There are around 90,000 people living with dementia in Scotland, and the funds raised at the tournament can now go towards expanding the national Admiral Nurse Dementia Helpline, the only specialist-led dementia helpline in the country. It will also help develop new community based posts in Scotland, with the aim of funding at least two nurses by the end of 2020. This opportunity complements the national partnership already in place between Standard Life Aberdeen and Dementia UK.

Kirsty Brownlie, Head of Community Engagement and Sustainability at Aberdeen Standard Investments, said: “I’m delighted that we’ve been able to extend our national partnership with Dementia UK by having them as the official charity of this year’s Aberdeen Standard Investments Ladies’ Scottish Open. It has been a pleasure for us to work with them and to raise this great sum.”

Michael Wood, Tournament Director of the Aberdeen Standard Investments Ladies Scottish Open, said: “We would like to thank Aberdeen Standard Investments for their support of the ‘Birdie Pledge’, as well as the players, spectators and volunteers for the significant contributions they made throughout the week. Through their generosity, we have raised a fantastic sum of money for a wonderful cause.”