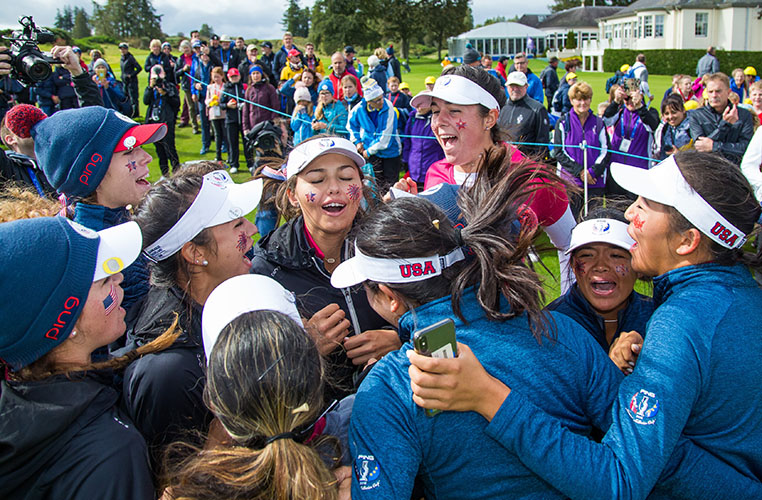 Europe’s brave bid to win the PING Junior Solheim Cup ended in disappointment when the American team beat the home team 13-11 in cold and blustery conditions over the King’s course at Gleneagles.

Europe won the closing singles series 6 ½ – 5 ½ but that was not quite enough to turn around the three-point deficit from the previous day’s fourball matches after the two teams tied the opening foursome series 3-3.

Nevertheless, it was still an admirable performance from a young European team about half of whom will be eligible to represent Europe for a second time in Toledo, Ohio, in two years’ time.

The closing day of the 10th PING Junior Solheim Cup started under leaden skies but home heroine Hannah Darling soon heated up the action when she halved the top singles against World No. 5 Lucy Li. That result coupled with the point she won in partnership with England’s Annabell Fuller in the opening foursomes represented a fine return for the 16-year-old Scot, who was playing with the hopes of a nation on her shoulders. 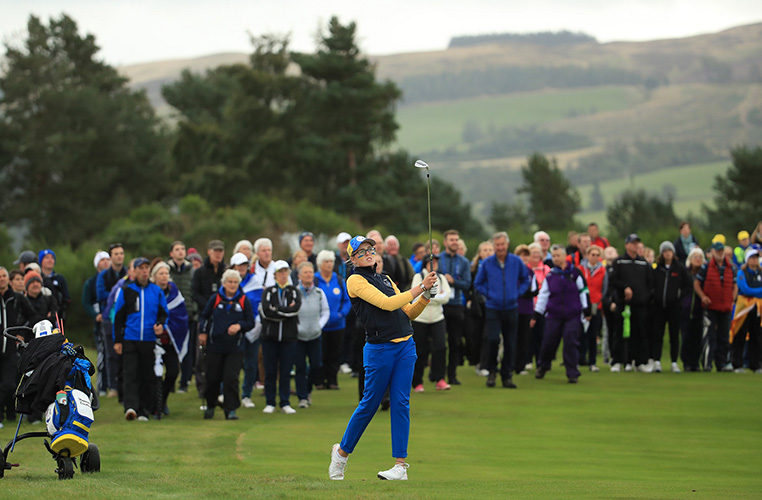 Fuller, Amalie Leth-Nissen and Pia Babnik were the next Europeans to put points on the board after victories over Michaela Morard, Sadie Englemann and Rachel Heck but Rose Zhang, Amanda Samback and Briana Chancon countered for the Americans with wins over Alessia Nobilio, Lilas Pinthier and Lily May Humphreys before Brianna Navarrosa claimed the winning point for the visitors with a narrow one hole victory over England’s Mimi Rhodes.

It has been a stirring performance by the European and that was reinforced when Anne Normann, Benedetta Moresco and Lucie Malchirand confirmed their team’s victory in the singles with wins over Zoe Campos, Phoebe Brinker and Alexa Pano. America’s other point came from Christine Wang who beat Paula Schulz-Hanßen 3&2.

The wins by Chacon and Wang made the two Americans the only two players to claim three wins out of three during the match. Europe’s most successful players were Fuller, Normann, Leth-Nissen, Moresco and Malchirand who all accumulated two points out of three.

“That was tough out there,” said US captain Mary Bea Porter-King. “I knew it wasn’t going to be easy and I told my team last night that just because we were ahead didn’t mean it was over.

“It was close all day long and we had to grind it out to beat a strong European team.

“I’m exhausted and I didn’t even hit a shot. It was very close and I’m proud of the way my team handled the pressure. These young ladies are so talented. And by that I mean both sides because there has been some incredible golf played by both the US team and the Europeans.

“It makes me feel good about the future of the women’s game,” she added.

“We certainly put up a good fight but, on the day, we weren’t quite good enough,” admitted European captain Mickey Walker.

“It would be fair to say we lost the match yesterday in the fourballs but, whatever competition you play in, you can look back and find something you could have done better and there was a spell yesterday afternoon when some of the matches that were tight went their way because we made rudimentary mistakes. You can’t do that at this level. That’s in no way saying the girls weren’t doing what they should, because they were trying their hardest. But that’s golf and they will learn from their mistakes.

“They are a young team and at least half of them will be eligible for the match in America in two years’ time,” she added. “They will have learned an enormous amount from this. You only learn by your mistakes and hopefully that will help them we it comes to playing against the Americans again.” 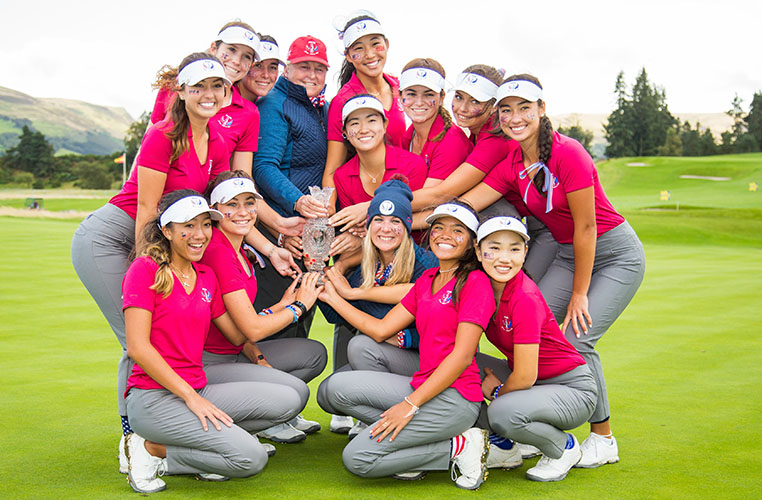