The Aberdeen Standard Investments Ladies Scottish Open has announced the introduction of two themed days for the weekend to add to the fun at The Renaissance Club from the 8 – 11 August.

The tournament, which is co-sanctioned by the LPGA and Ladies European Tour, makes its debut at The Renaissance Club just three weeks after the men and is set to feature world-class talent including defending champion and major winner Ariya Jutanugarn, as well as Jeongeun Lee6, So Yeon Ryu, Georgia Hall, Charley Hull and Scotland’s very own Team Europe Solheim Cup captain, Catriona Matthew.

Ladies Day, which will take place on Saturday 10th August, is new for 2019 and gives all women that attend the chance to not only watch the golf but take part in a golf clinic with European Tour coach Gary Nicol and enjoy live music from former Westlife star Brian McFadden and upcoming Scottish artist Hugh Kelly.

No golfing experience is required and welcome drinks will be served to all attendees on arrival as well as a free shuttle service being in operation from North Berwick Train Station to the golf course.

Participants will also be able to enjoy cocktail making masterclass sessions supported by Loch Lomond Distillery, relax with a complimentary neck and shoulder massage courtesy of The Macdonald Marine Hotel and witness a special guest Q&A in the public village hosted by TV personality, Emma Dodds with popstar Brian McFadden amongst other stars from the event.

Speaking about the initiative, Martin Gilbert, Chairman of Aberdeen Standard Investments, said, “The Aberdeen Standard Investments Ladies Scottish Open is committed to showcasing this special event to as many new audiences as possible. It’s important for us to bring in new fans to golf and we hope that Ladies Day offers women, who might not have previous golfing experience, the opportunity to visit The Renaissance Club and have a fantastic day out.”

In addition to Ladies Day, Solheim Cup Sunday is also new to the 2019 tournament. In support of the Solheim Cup, which takes place at nearby Gleneagles from 9 – 15 September 2019, fans are encouraged to get behind the tournament by wearing Team Europe or Team USA colours to pledge their support of their favourite team in the biennial contest. 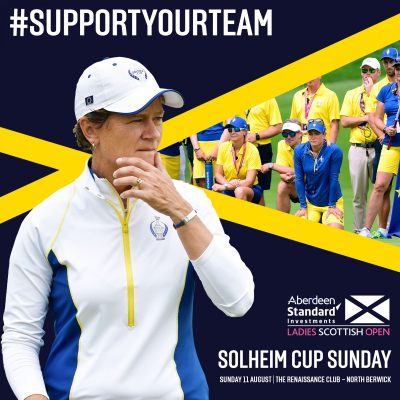 The best-dressed fan will receive a special Solheim Cup pin flag signed by all the European Team and there will be on the spot prizes for those that have made the effort.

Another special guest Q&A will take place in the spectator village with a number of Solheim Cup stars, giving fans the opportunity to ask what it is like to be part of one of the world’s greatest golf events.

Paul Bush, Director of Events with VisitScotland, said, “The Solheim Cup is one of the world’s greatest golf events and with it taking place just one month after the Ladies Scottish Open, it only felt right to put on a day for the fans to show their support. Scotland’s Catriona Matthew will captain Team Europe for the first time and we hope that spectators and fans alike can get behind her and all the players at the Ladies Scottish Open who are looking to qualify for each of the prestigious teams.”

This event will feature and promote East Lothian.  Scotland’s Food & Drink County marquee will showcase the diversity and quality of local produce that will be available for tasting and purchase and the Scotland’s Golf Coast on course activation zone will give visitors an opportunity to find out more about the golfing, accommodation & leisure offering in the area.