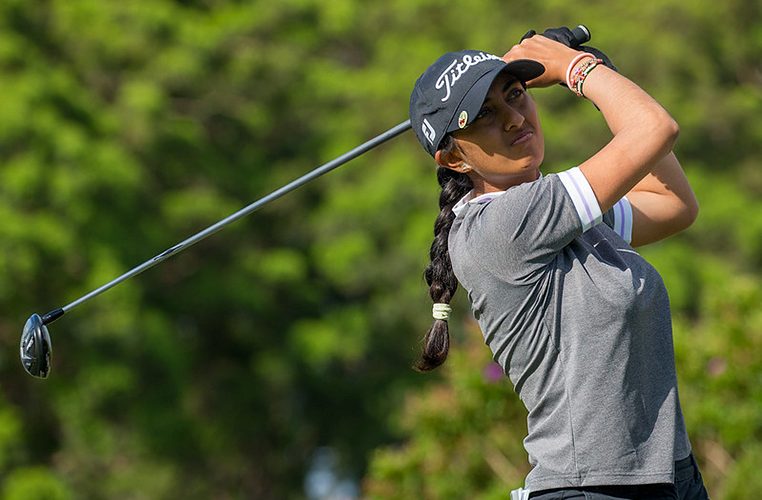 Indian Prime Minister Narendra Modi announced a nationwide lockdown on March 22nd, ordering 1.3 billion people to stay in their homes in the world’s biggest curfew aimed at slowing the spread of Covid-19.

It means that three-time Ladies European Tour winner Aditi has had to make drastic changes to her lifestyle.

She has been at home in eastern Bangalore since early March, but has only been out once, to the grocery store, wearing a protective mask.

With golf courses closed, this Olympian has had to adapt and these days, long game practice comprises hitting into a curtain from a concrete terrace.

“I had ordered a bay and a net but neither of them ended up coming and they were eventually cancelled because one was coming from Delhi and another from a neighbouring state, which has been hit pretty hard by the virus,” said the 22-year-old, who represented India in the Rio 2016 Olympic Games.

“I’m stuck with a curtain, which isn’t too bad. A lot of my friends have been using one and it takes a full shot. I’m not able to hit as many shots as I want, because I just have a foot mat and a yoga mat and that’s not enough to take the impact of my shots.

“The mat is getting worn out and has a couple of holes in it. I hit about 50 shots and then it gets too much. On the wrists and lower back, it’s not good when you’re hitting off such a hard surface. I hit a few 6-irons for the muscle memory and do a bit of chipping and putting indoors, which is also nothing like the real thing, but keeps me going.”

Putting has always been one of the strengths of Aditi’s game and she is keeping the stroke honed by practising 10 footers on a soft blanket.

Like most home workers, Aditi is trying to stick to a regular routine, but she has found that combining golf practice with workouts each day is a challenge, so is now alternating the physical activity each day.

It’s not just the physical side of the game that Aditi is working on. She is also exercising her brain by writing left handed for 20 minutes a day: “I’m writing words now and will move on to sentences soon.”

A prolific reader, Aditi has already re-read the seven books in the Harry Potter series, which she last read whilst at school and is moving on to self-help books. Unfortunately, a shipment of books which she had ordered online are now unlikely to be delivered and she prefers traditional paperbacks to electronic iPads and Kindles.

In light of this and the fact that the family television has broken and the replacement LED parts cannot be shipped, she has signed up for Netflix and Amazon Video subscriptions for the first time, so that she can watch movies on her laptop.

Aditi has completed her first puzzle, a large 1000-piece scene of a lighthouse, as well as the world’s oldest puzzle.

She has also been doing more cooking and making delicious Indian breads like Chapatis and Dosas, as well as trying her hand at vegan bakes and ice creams, including banana bread and chocolate ice cream.

The enforced break is certainly not slowing Aditi down, but it has made her realise how lucky she is to live and breathe her passion.

“When we start, it will have been the longest break from golf I’ve had since childhood,” she said. “It will be hard when we go back, but I know I’ve done well when I’ve played in a lot of tournaments in a row, so I’m looking forward to it.

“If all goes well, we will have the same number of events that we had from February to December squeezed into six months, from June to December. It’s going to be like my rookie season when I played 14 out of 16 weeks. I hope that we get a good swing of golf events before the Olympics.”

Is it just me or are these ants social distancing too 🤔 #boredom #socialdistancing #lockdown #stayhomestaysafe 🙏 #coronavirus pic.twitter.com/umYLxWJw3t

Four years ago as an LET rookie, Aditi soared into a share of the lead during the second round of the Olympic golf competition in Rio and she was a shoe-in for Tokyo 2020 at No. 38 in the Olympic Women’s Golf Rankings. The top 60 will qualify for the Games, which have been rescheduled for 23 July to 8 August 2021.

Momentum can be a key part of sport and Aditi was making great progress, with an eighth place and two runner-up place finishes at the end of 2019, followed by a tie for fourth at the Women’s New South Wales Open in Australia in early March.

“I’ve played good enough golf over the last three months to feel good about the season ahead,” she said.

One certainty is that when the season resumes, Aditi will be ready to go, having used this down time wisely, to become the best that she can be, on and off the course.