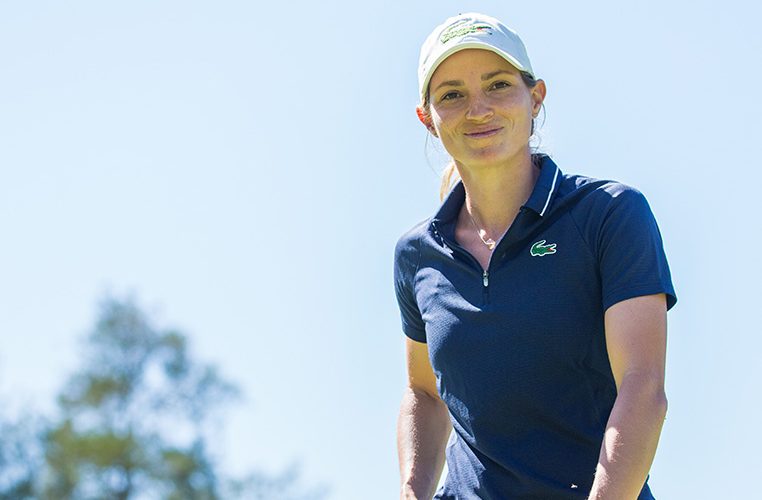 Agathe Sauzon may be an elite sportswoman but that doesn’t mean that she can’t enjoy the odd indulgence.

During her time at the University of Chatanooga in Tennessee, the French golfer’s teammates would beg her to bake them a chocolate cake each week. One such teammate confided: “It was the best chocolate cake I’ve ever tasted.”

During the coronavirus lockdown, she is taking advantage of the opportunity to get back to baking.

The 28-year-old from Bourg-lès-Valence in south-eastern France, has so far made cookies, bunnies, gingerbread and apple pie. “I love cooking, and especially baking. I love baking,” Agathe says. “I use to make the same chocolate cake each week and it was either that or crèpes.”

Agathe has always been active and during her prolonged stay at her parents’ house, she is taking the opportunity to get fitter.

“I’m lucky because they have a swimming pool and the weather has been super nice. I’m also able to practice golf in the garden.

“I have a fitness programme and I keep to that. I run, do some weights, work on core and power.

“It’s been a month and I’m starting to get bored but I try to keep the same routine, work on my swing and do some meditation.

Agathe remains in daily contact with her friends on tour as they trade Instagram challenges in the absence of competitive golf.

“I talk a lot with the other French girls, we give each other challenges, to make it a bit more fun, especially with Camille (Chevalier). We always try to challenge each other. I might do a dancing challenge, but I don’t know if they will do it.”

“I did the Roger Federer Challenge. I thought Roger Federer would text me because he said to do the challenge and then he would send you tips!!!

“I’m also going to find a course to do. In France, there are a lot of free online classes which have opened. I’ll try to teach myself something. I don’t know what yet, but maybe something that can help me in the future.”

Agathe has a degree in Chemical Engineering and her main final year project was to create a face cream that reacts with the skin’s pigment to form make-up.

“Maybe in the future I will do something with beauty, or physiotherapy, or working in the golf industry,” she said.

For now, the fifth year LET player, ranked 13th on the Race to Costa del Sol, is looking forward to competing again and building on her early-season results, which included a tie for 12th in the Women’s New South Wales Open and a tie for seventh in the Investec South African Women’s Open. She attributes this to improved putting and is currently ranked 15th on tour in putts per round, with an average of 28.73.

“My putting has been a lot better this year because I went to see a coach at the beginning of January. It wasn’t consistent. One day was good and the next day was poor. I was good at making short putts from five feet but I didn’t hole a lot of long putts, so in the last three tournaments that I played, my average was under 30 putts per round and some days it was 25 or 26, so I’ve seen some huge improvements.

“I can’t wait to play, because I love competition and I get bored practising for weeks. I’m pleased with how I played at the beginning of the year. I’ve taken this time to get even better. I don’t know when we will re-start, but I’m really looking forward to it.”