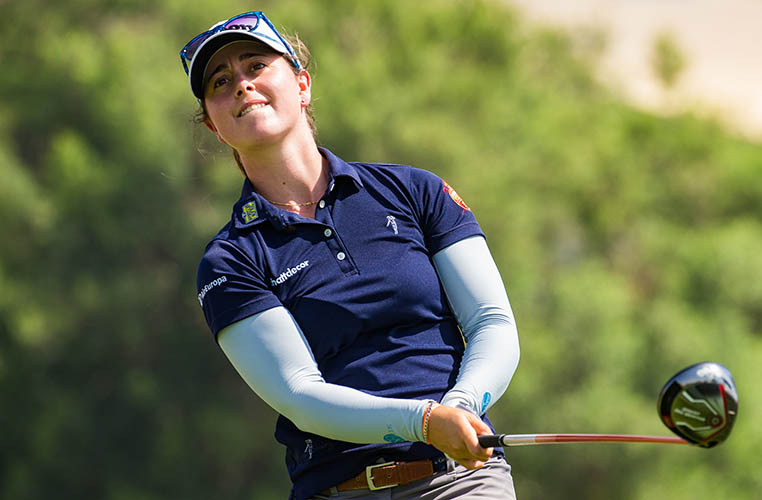 Nuria Iturrios has a shot at joining a rare band of back-to-back winners on the Ladies European Tour today.

The 23-year-old Spaniard, who won her second Lalla Meryem Cup title in four years in Morocco on Sunday, started the final round of the Omega Dubai Moonlight Classic tied for the lead with German rookie Esther Henseleit but gained a two-stroke lead after a two-shot swing on the par-3 second hole early in the final round on the Faldo Course at Emirates Golf Club.

She then left an eagle putt two inches short on the par-5 third hole, tapping in for a second birdie to take a three stroke lead over Henseleit, with fellow German Olivia Cowan a stroke further back in on seven-under.

The two-shot swing was reversed at the sixth, when Iturrios missed the green and hit her chip shot beyond the hole, two-putting for bogey, while Cowan made a six-footer for birdie.

Iturrios then dropped into a share of the lead with Ireland’s Leona Maguire  at eight-under after making a double-bogey on the par-4 seventh, where she hit her first tee shot into the lake right of the fairway.

However, she recovered by rolling in a simple birdie putt on the ninth green to regain a one-stroke lead at the turn.

It’s a scorching day with air temperatures at 34C and Iturrios is clearly enjoying her time in the desert sun.