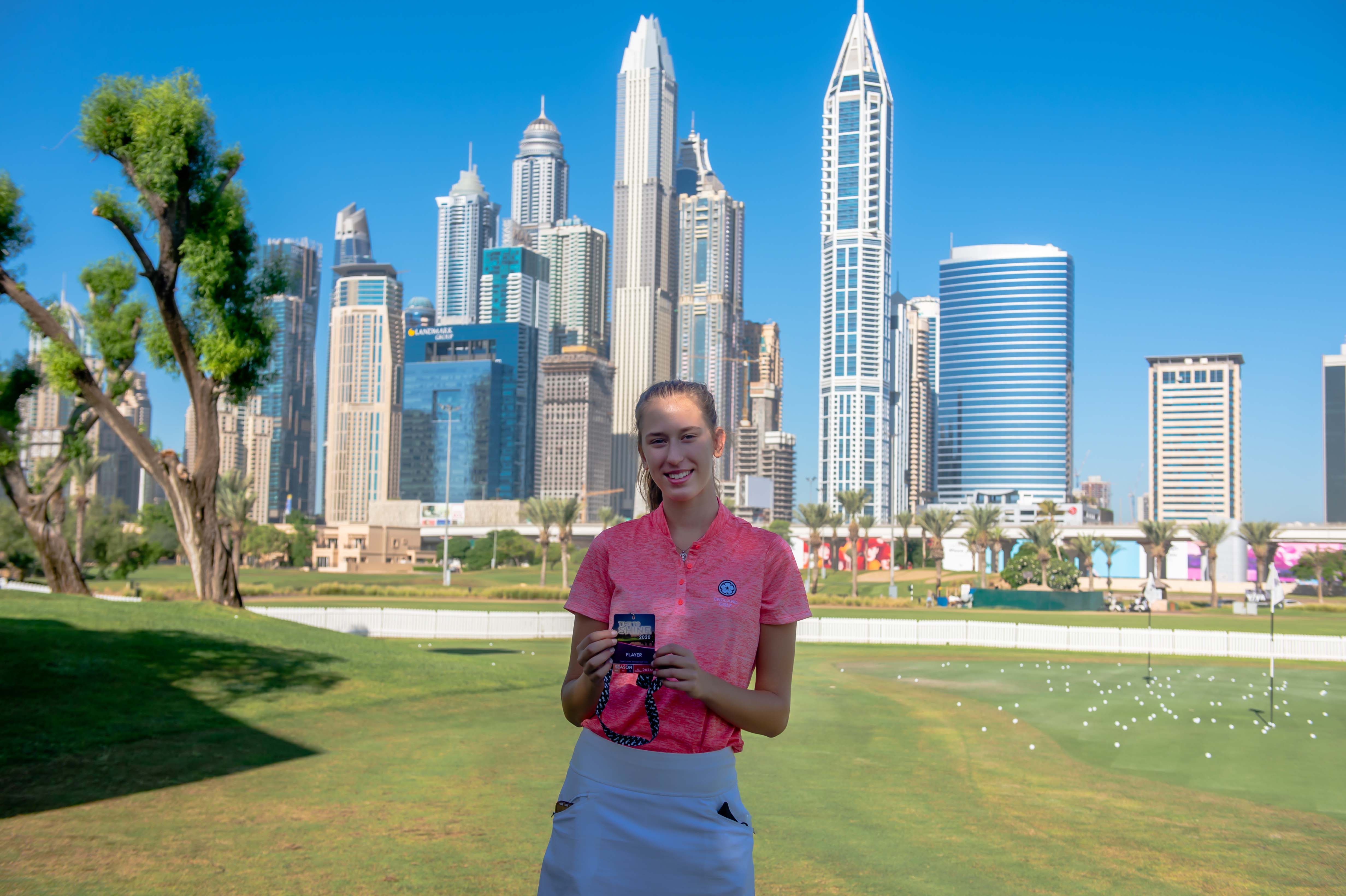 World-class female golfers have begun to arrive in Dubai ready for what is shaping up to be an unforgettable showdown at the 2020 OMEGA Dubai Moonlight Classic.

However, there will be two young and upcoming players who will be looking for podium glory next week having secured invites to join the fray, 22-year-old Alison Muirhead and 14-year-old Chiara Noja. Both Muirhead and Noja are Dubai-based players, honing their game in the winter sun to ensure they can compete at the highest levels.

Muirhead was born in South Africa and moved to Dubai at the age of eight. A lover of sport from a young age, Muirhead became a netball captain for a Dubai based team, as well as playing in golf competitions as a young girl. Commenting on her wildcard selection to this year’s OMEGA Dubai Moonlight Classic, Muirhead said: “I am delighted to have been given an invite to this year’s OMEGA Dubai Moonlight Classic. Having grown up in Dubai and dreamt of one day having the chance to compete against the very best, it’s very surreal to now have been offered that opportunity. I was lucky growing up in Dubai,  home to some of the finest courses in the world, allowing me to practice in prime conditions regularly. As I got better, I was able to compete in multiple girls and ladies’ competitions, organised by the Emirates Golf Federation and it was success at these which gave me the confidence and desire to succeed at the highest levels of the game.”

Making her LET debut as an amateur will be 14-year old Chiara Noja, who at such a young age already plays off a +5 handicap. Originally from Germany, Noja first made her name in the UK as a twelve-year-old overcoming a succession of more experienced and older players at the Hertfordshire Lady County Championships. In 2020, Noja and her family made the major life decision of moving to Dubai, so the teenager could continue her development and see if she has what it takes to turn professional further down the line. Noja was thrilled when she received the news that she’d be teeing it up alongside her heroes come 4th November.

“I couldn’t believe the news when the Tournament Director contacted me to confirm that I will be playing in the OMEGA Dubai Moonlight Classic. Thanks to their support, I will be able to test myself against the very best women in the world. I only arrived in Dubai a few weeks ago, but I already feel at home here. I am working hard on my game every day, and hopefully, I’ll be able to make the best possible use of this invitation and show not only my fellow competitors but the Ladies European Tour that I deserve my spot.”

One player though who will be relying on her experience come tournament time will be 32-year-old Maha Haddioui, who remains the first and only Arab woman golfer to play on the Ladies European Tour to date. Morocco’s Haddioui – who has played on the Ladies European Tour (LET) since 2012, will be competing in Dubai and hoping to secure her maiden victory on the LET circuit.

“I’m really excited that I will be playing in next week’s OMEGA Dubai Moonlight Classic, it’s a tournament I’ve always enjoyed playing in and being an Arabic speaker, Dubai is always a place I feel incredibly welcome. The LET tournament in Dubai has been a mainstay on all of our collective calendars for over a decade now, and it’s one we all enjoy returning back to year after year, particularly with the new innovative nighttime format set against the iconic Dubai skyline. Obviously, it will be different not playing in front of spectators, but we’re all incredibly grateful that we’ve been given the opportunity to play in such a prestigious tournament.”

Formerly known as the OMEGA Dubai Ladies Masters, the inaugural tournament was played in 2006, with a strong rollcall of previous winners, including the two-time winner, Annika Sorenstam, and four-time champion, Shanshan Feng. Sorenstam won the first two events back to back in 2006 and 2007, while Chinese former world no.1, Feng, dominated from 2014-2016, winning the tournament three times in-a-row.

The newly named and scheduled tournament has been switched from May to November after its first staging in spring 2019 when it achieved global recognition as the world’s first professional day-night tour event.