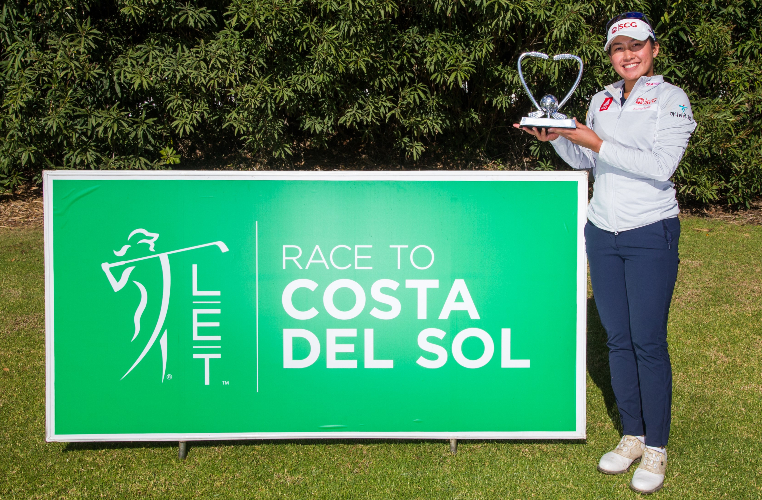 Another year is in the books and a jam-packed season on the Ladies European Tour is complete.

The 2021 Race to Costa del Sol began in South Africa in May and it was a well-known face who secured the crown as home favourite Lee-Anne Pace clinched her tenth LET title.

Italy returned to the LET calendar for the first time since 2014 and it was a new face who broke through to triumph.

French amateur Lucie Malchirand led from the front and back-to-back birdies in her final two holes saw the 18-year-old join renowned company by winning on the LET as an amateur.

One week later and it was another young star who came to the fore as Slovenia’s Pia Babnik – the youngest member of the LET at 17 – won her maiden title at the Jabra Ladies Open.

The Tour headed to Sweden for something a little different as LET joined forces with the European Tour for the Scandinavian Mixed.

A field of 78 men and 78 women competed for the same trophy and it was Northern Ireland’s Jonathan Caldwell who clinched top spot with England’s Alice Hewson finishing in third place.

Next up was the Czech Republic where Thailand’s Atthaya Thitikul came from behind to secure her third LET title – but her first as a professional.

On week later and Stephanie Kyriacou, who also won as an amateur, won her first title as a professional at the Big Green Egg Open in the Netherlands.

London was the next destination for the Tour and the first Aramco Team Series event of the year took place at Centurion Club.

Another first-time winner was next as Finland’s Matilda Castren triumphed in her home tournament to become eligible to be a member of the European Solheim Cup team – more on that later.

Ryann O’Toole was victorious in Scotland, and it was Solheim Cup stalwart Anna Nordqvist, who became a three-time Major champion at the AIG Women’s Open.

Two weeks in Sweden were up next and two new rising stars emerged as Pauline Roussin-Bouchard and Maja Stark took home the trophies.

But back on the other side of the Atlantic Ocean, Team Europe were producing something special in Toledo as Catriona Matthew led her team to an historic victory.

The Scotswoman became the first European captain to win back-to-back Solheim Cups and it was Castren, who rolled in the putt to retain the cup while 2020 Race to Costa del Sol champion Emily Kristine Pedersen secured the outright win.

Thitikul was back in the winner’s circle in Switzerland for her second title of the year and two-time Solheim Cup winner Celine Boutier produced the goods to win the Lacoste Ladies Open de France.

Just a few weeks after her first LET victory, Stark produced a scintillating final round to win again on the LET but this time in Spain.

England’s Bronte Law won under the lights in Dubai with Lydia Ko storming to victory at the Aramco Saudi Ladies International.

The Aramco Team Series – Jeddah, the final team event of the year, saw Babnik clinch her second win of the season as she picked up the individual prize.

There was another play-off in the team competition, and it was Team Pedersen – Emily Kristine Pedersen, Hannah Burke, Krista Bakker and amateur Ahmed Al Subaey – who came out on top.

With Thitikul being crowned the 2021 Race to Costa del Sol champion after a superbly consistent year on Tour, the LET season finale in Spain saw Carlota Ciganda finally win her home event which was her fifth LET title.

To round off the year, the LET held Q-School at La Manga Club in Spain where Sweden’s Lisa Pettersson won Pre-Qualifying and American Gabriella Then won the Final Qualifier.

What a year! With 23 tournaments in 16 countries, there were 20 different champions from 12 nations, including nine first-time winners in 2021. There were three young players who won twice: Atthaya Thitikul, Pia Babnik and Maja Stark, all with bright futures ahead of them.

Another exciting year is in prospect, with more tournaments and prize money than ever before. It all starts in Kenya next month. Bring on the 2022 season!