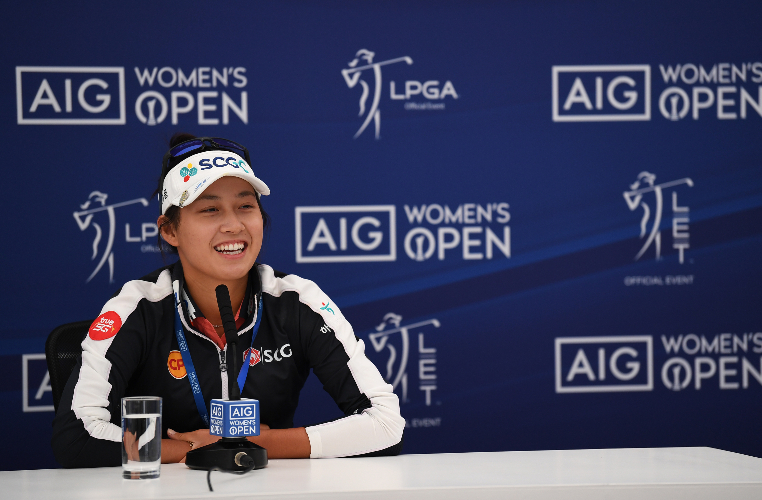 Thailand’s Atthaya Thitikul is ready to battle on a links course once again as she prepares to tee it up in the 2022 AIG Women’s Open at Muirfield.

The 19-year-old will be making her fifth appearance having made her debut in 2017 and winning the Smyth Salver low amateur award in 2018 and 2019.

But returning to a type of golf course, which she doesn’t necessarily enjoy, is always a challenge and the world number six knows it will be a test.

“I would say AIG Women’s Open is the hardest Major in the majors because I’m not a big fan of links golf,” said the four-time LET winner.

“I come here to the UK every year and play links courses, it’s a learning experience. When I first played in the Women’s Open, it was such a beautiful course, but it was my first time playing links and I thought ‘oh gosh, I hate it’. But at the same time, I love it as well, I love the challenge and the fact you have the weather, the wind, seeing how the ball will react in the course. It’s a challenging Major in my opinion.”

After winning the 2021 Race to Costa del Sol on the LET last year, the 19-year-old has had a rapid rise securing her spot on the LPGA Tour through Q-Series and has had an excellent season to date.

Thitikul won the 2022 JTBC Classic in March clinching her first LPGA title and has had eight further top-10 finishes in 2022.

The Thai teenager sits fifth in the Race to CME Globe and leads the Louise Suggs Rolex Rookie of the Year competition and can’t quite believe the progress she has made.

“I really surprised myself,” she explained. “I think it’s been a rollercoaster as well. Being an amateur and being able to win the Women’s Asia Pacific and get a chance to compete on the best Tour in the world against the best players in the world. Then being able to come here, be an LPGA member and top 10 in the world, there’s no are words to describe.

“When I turned pro, the biggest dream of my life to be a member of the LPGA and maybe get a couple wins under my belt. I am a member already, and I just keep trying to get better and trying to improve myself every single day.”

It is an historic week with Muirfield hosting the Championship for the first time and Thitikul has spoken with her coach about what to expect this week.

“My coach told me Muirfield is an amazing course and it’s the first time that women have played here. It’s an amazing and challenging,” she continued.

“I would say the hazards are the most difficult part. You can’t expect anything with links because sometimes things happen and you get a bad bounce, so you have to be patient. The most important thing is the wind and how you handle it, and the commitment you have to have to hit the ball.”

And would she be surprised if the winning total this week was level par?