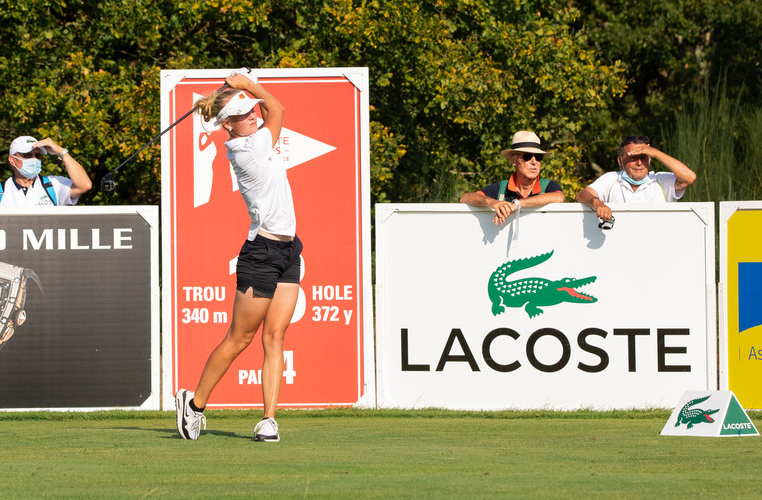 Sweden’s Julia Engstrom had a day to remember at the 2020 Lacoste Ladies Open De France, carding a hole-in-one en route to a second round 64 (-7) to top the leaderboard heading into tomorrow’s final round.

Leading by four-strokes from the chasing pack including 2015 champion Celine Herbin and India’s Tvesa Malik, Engstrom’s ‘round of the week’ was made even more incredible by the fact she accomplished one of golf’s rarest shots, holing a 133-yard 8-iron on the par three 8th hole.

“It was right at the pin but because of the bunker we couldn’t see if it was in or not but when we got to the green, we could only see two balls so Amy said, I think it’s in and I looked down and there it was. It was a special feeling.”

Capitalising on the ace, Engstrom continued to go flag hunting at Golf Medoc’ Chateaux Course, immediately following up with a tap-in birdie at the 9th hole.

A bogey at the 11th slowed the birdie train temporarily but a further three gains on Nos. 15, 17 and 18 saw her set the clubhouse target at eight-under-par.

“I was hitting a lot of good shots today, recently I have been struggling a bit with my ball-striking but today I felt normal and I could attack the pins.”

Looking to grab her second LET victory of the season, having won the Women’s NSW Open in March, the 2018 LET ‘Rookie of the Year’, who is still only 19-years-old added,

“The win in Australia was big for me because now I know I can win on the Tour and I am happy to be in this position going into tomorrow. It’s nice to be out here with so many Swedish girls and the Tour is so friendly which make me feel really comfortable.”

Former champion and home favourite Celine Herbin shot a bogey-free 66 to move through the pack in to T2 place alongside India’s Tvesa Malik who is on a six-week tournament run.

Herbin said, “It is a special tournament for me, winning it before makes me more confident but Julia has quite an advantage so I will need a low one but I am happy with where I am at and I’ll do my best to push her all the way.”

Malik, who is chasing her first top-10 finish on the LET outside of India, will feature in the final group at 12.05pm and added, “I booked a one-way ticket from India so I am glad I have been able to play so much golf and It’s been really fun here in France. I am grateful for the opportunity to compete; the course is such a good set up.”

The 36-hole cut fell at +2 with 36 professionals and one amateur making the final round which gets underway tomorrow at 9.00am.