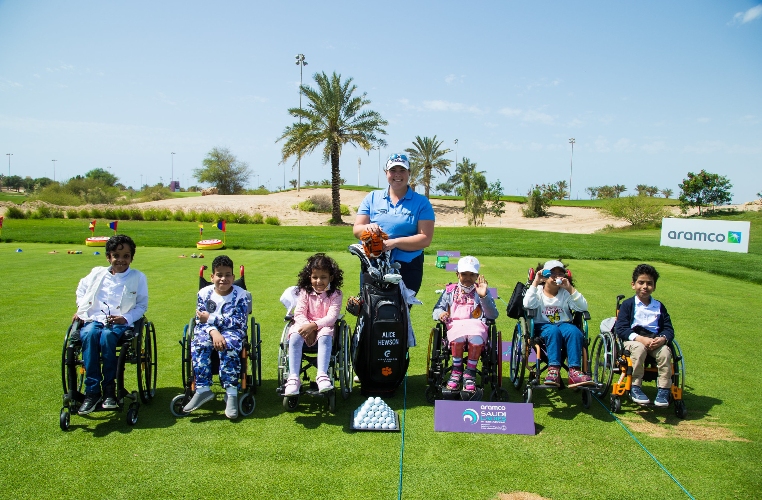 Alice Hewson has been recognised in reference to the Velocity Global Impact Award for her work with golfers who have disabilities.

Hewson has attended a number of clinics this season, including at the Aramco Saudi Ladies International in Jeddah and the Volvo Car Scandinavian Mixed, where she has inspired a number of aspiring golfers to get involved in the sport.

The English ace proudly represents EDGA – which aims to increase accessibility and inclusivity within golf – and is a keen believer that the sport should be played by as many people as possible.

“I think EDGA is such a great association to support and to bring awareness all over the world what they are doing for disabled golf and all the players.” Hewson said.

“Golf really is for everyone, and they are providing a platform where people who normally have to adapt to everyday things in life have golf adapting to them to bring them to the game.

“Everyone should have the opportunity to play golf, it’s such a fantastic game. It’s great for some exercise, great to meet other people, and it gets everyone outside having fun in the sun.

Velocity Global, the Official Global Work Platform of the LPGA Tour and the Ladies European Tour (LET), is proud to sponsor the Velocity Global Impact Award.

This honour will celebrate players who have helped to grow the sport of golf and to inspire the next generation of athletes to have a positive impact on the world.

Throughout each season, the LPGA and LET will celebrate players and their efforts in giving back to the world and their local communities off the golf course.

Toward the end of each season, the LPGA will produce a list of nominees, and the Velocity Global Impact Award Committee will name three players as Award finalists.

Each finalist will be featured in a docuseries-style content piece sharing their personal story and impact on the game. The winner will be determined through a combination of a fan vote and voting by the committee, and will be announced annually on International Women’s Day, March 8.