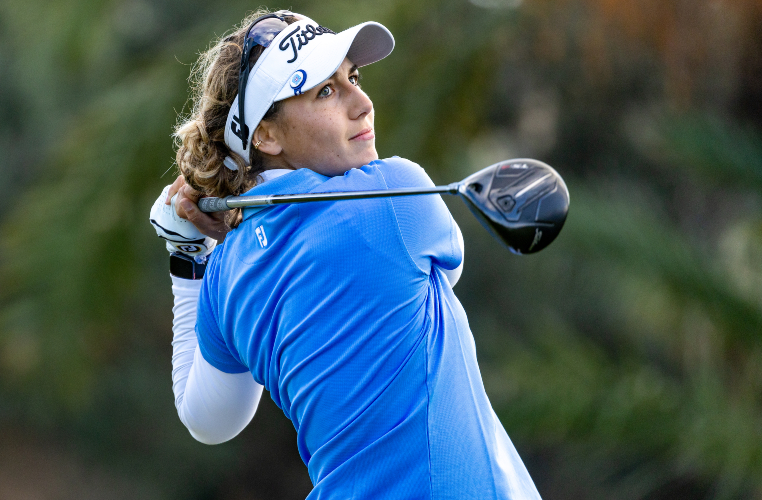 Amateur Nastasia Nadaud posted the round of the day to propel herself to the top of the leaderboard at the end of the second day of the Final Qualifier at LET Q-School.

It was a solid day for the 18-year-old, who only dropped one shot in her second round, and rolled in seven birdies to lead the tournament on nine-under-par.

“I didn’t miss that many shots out there,” said the French amateur. “I maybe just missed one green so that really helps. I made more putts than yesterday which is why I was six-under and not three-under. The game is feeling really great.

“My long game is in a really great place. I’m not missing a lot of shots and I’m very committed to every shot. We’ll just keep trying to keep the same strategy and see how it goes.”

Speaking of whether she’ll make the decision to turn professional, Nadaud says she will be a pro in 2023 whatever happens this week.

She added: “No matter what happens, turning professional is the only option! We see the LET growing up and watch it every year. It’s really motivating to see those girls and imagine playing with them. I’m really looking forward to it.”

Two players sit in second place on shot back from the leader with Germany’s Polly Mack and Danish amateur Amalie Leth-Nissen both on eight-under-par.

It was an excellent second day for Mack, who posted a bogey-free 68 on the South Course to move up the standings.

“It was pretty straightforward today, there weren’t many mistakes out there,” said the German. “I made some putts in the beginning which helped for the confidence and then I kept it going. Some putts fell and some didn’t, but not many mistakes.

“It’s been a while since I’ve been in Spain, but I’m really enjoying the views out here. It’s lovely and pretty out here so I’m enjoying every day and enjoying that my parents are here with me. I’m just trying to have a good time.

Mack has spent the last two weeks in the United States at LPGA Q-Series and secured her card for 2023 after finishing T15 at the Final Stage.

But it was always the plan for Mack to play both Q-Schools, so that she could potentially have the option of playing on both Tours next season.

She added: “I talked through with my coach from the national team and he advised me to sign up. It’s nice to have the option and decide whether I want to play in the US or start over here on the LET.”

Leth-Nissen, who led after the first round, followed up with a 72 (-1) on the South Course on day two putting her in a share of second place.

“It was a bit tougher today, but I think it was just me and not the course,” said the 2021 PING Junior Solheim Cup winner. “I didn’t really hit the shots I wanted, I fought all day and made it in one-under. It was okay with what I had today.

“It was difficult. I didn’t imagine playing that well especially in the first round, so I had to focus again and know where I did good yesterday but it’s a new round tomorrow and I also tried to stay away from social media. It’s one out of five rounds, anything can happen so just keep on going.

“I hit a lot of greens, but they weren’t close enough and it’s pretty difficult to putt downhill and from 10/11 metres all the time. It’s a struggle compared to being two metres away from the pin. Tomorrow will hopefully be a little bit closer.”

Slovenia’s Ana Belac is in fourth place on the leaderboard on seven-under having opened her Q-School with rounds of 68 (-3) and 69 (-4) on the North and South courses, respectively.

The LPGA Tour player signed for two bogeys, four birdies and a hole-out eagle on her way to posting a round of four-under on day two.

“It’s been fun, it’s nice to be back in Europe after a year and a half,” said Belac. “I’m enjoying some good fun and I played in Spain quite a bit as a junior, so it’s nice to be back. Q-School is not the most fun time of the year, but I try to make the most out of it!

“[On her eagle] I was in the middle of the fairway and had a 9-iron, it was a pretty good number. I hit the ball and it looked really good on the line and it just hopped in the hole. That was pretty exciting, it doesn’t happen often. That was nice.

“As a European, I have lived in the Unites States for the past six or seven years and I’m playing on the LPGA Tour, but I would also love to have the option of playing out here. Down the line, hopefully I’ll be in the Solheim Cup team. That’s one of my main goals, if it doesn’t happen next year then maybe in two years but keeping my options open and having opportunities to play on both Tours would be pretty cool.”

Three players are in a share of fifth place with Switzerland’s Albane Valenzuela, England’s Annabel Dimmock and Thailand’s Trichat Cheenglab all on six-under-par.

Rounding out the top ten are German pair Alexandra Försterling and Sophie Hausmann alongside Austria’s Emma Spitz with the trio in T8 on five-under-par.