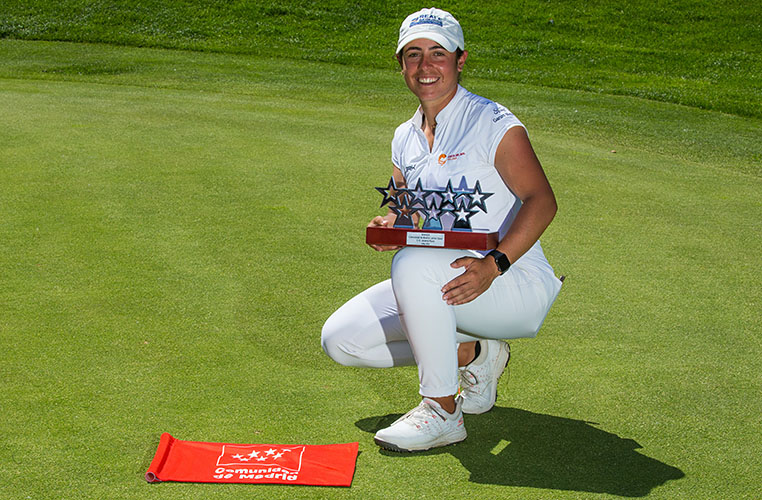 It was a dream start to life on the Ladies European Tour (LET) for Ana Peláez as the Spanish rookie won her first LET title at the Comunidad de Madrid Ladies Open in her debut tournament as a member.

The 24-year-old from Malaga shot rounds of 69, 67, 63 and 66 for an impressive total of 23-under-par to win by six strokes in front of large galleries at Jarama-RACE Golf Club.

Pelaez had shown flashes of her brilliance on the LET in the past when she finished third in the 2020 Andalucía Open de España as an amateur and she tied for 11th in the same tournament last year, after turning professional in July, on the eve of the Aramco Team Series – Sotogrande.

However, due to finishing in a tie for 83rd at LET Q-School in December, she had Category 18 status on the LET in 2022, which meant that she had to rely on an invitation to play in this week’s tournament.

Needing nothing less than a win to secure her full card – and a winner’s category of membership – she produced fearless golf of the highest calibre and thrived under the pressure. She even shot the course record: a nine-under-par 63 in the third round on Saturday.

“I was very calm. I was trying to do my job, like I did the last few days and take one shot at a time. I was trying to shoot as low as I could,” said Peláez, who had her brother, Carlos, as her caddie on the course and celebrated every great shot with a fist bump.

The 2015 European PING Junior Solheim Cup player, who has previously tasted success in the Spanish capital, winning the Santander Golf Tour Madrid in 2020 as an amateur, started the final round with a three stroke lead and quickly built momentum with birdies on the first and third holes. She two-putted on the par-5 first and then sank a 12 foot putt from beyond the flag at the par-3 third to build a six-stroke lead.

She hit the turn in 34 and then added another birdie on the 11th before chipping in for eagle from the edge of the 14th green.

“That was a moment I’ll never forget. The entire crowd went crazy and I love it. I love the energy. It was unreal,” she said.

Her final birdie came on the par-3 17th and she two putted for par on 18 for a huge cheer from the crowd.

“It feels unbelievably amazing. I’ve been dreaming about this moment my entire life and now I get to live it, so I’m very happy,” she said. “This means something very special to me. For the rest of the season I’ll be based on the LET. I’d like to thank my siblings, parents, coach and his entire family.”

There were several contenders for second place and Sweden’s Linnea Strom ended as the outright runner-up on 17-under-par after posting eight birdies in a final round of 64.

Strom, who won the IOA Championship presented by Morongo Casino Resort and Spa on the Epson Tour in March, said: “I played really well and if anything, it feels like I could have done even better. I’m happy and I had a great week in general so I’ll look to build on that and have a good summer.

“Ana’s performance is obviously amazing and for her to do it in her home country is even more fun. It’s very impressive. I thought I played great this week and she’s three shots ahead of me, so it’s very well done.”

Gabriella Then of the United States, who was three shots off the lead at the turn in the final round, slipped back into a share of third place alongside Pia Babnik of Slovenia (67), Manon de Roey of Belgium (67) and Spanish amateur Cayetana Fernandez (70).

Sweden’s Linn Grant finished seventh, with Ines Laklalech of Morocco in eighth spot and Olivia Mehaffey from Northern Ireland in ninth. Sweden’s Maja Stark tied for 10th and continues to lead the Race to Costa del Sol, as Peláez entered the LET’s official Ranking in a share of 10th place with 500 points.