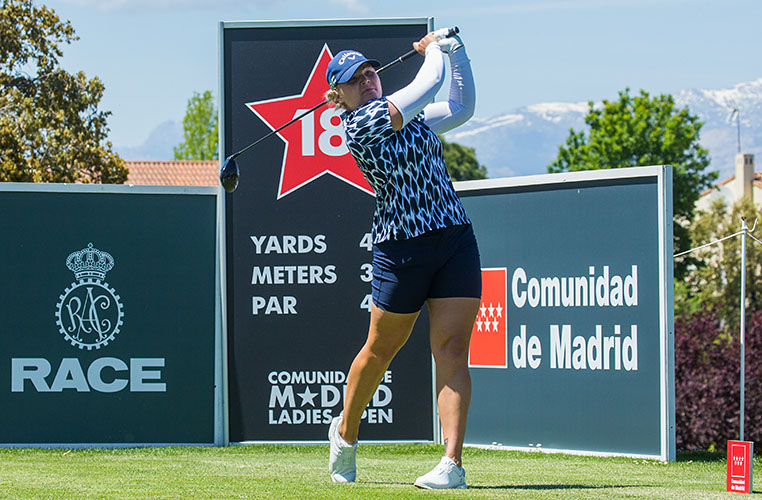 Finland’s Tiia Koivisto holds a one-stroke lead on 10-under-par at the halfway stage of the Comunidad de Madrid Ladies Open after a day of low scoring at Jarama-RACE Golf Club.

The 28-year-old from Mantsala near Helsinki fired a six-under-par 66 to take control, but two rising stars are hot on her heels.

Linn Grant of Sweden, who is second on the Race to Costa del Sol and the leading LET Rookie after winning the Joburg Open and finishing seventh in the Investec South African Women’s Open in March, shot a course-record seven-under-par 65 to share second spot with Spanish amateur Cateyana Fernandez, who shot a 67.

Another promising Spaniard, Ana Pelaez, lies in fourth position on eight-under-par, while her compatriot Carmen Alonso shares fifth with Agathe Sauzon of France and Pia Babnik of Slovenia.

Koivisto, whose career best finishes on the LET are tied seventh in last year’s Aramco Team Series – Sotogrande and this year’s Investec South African Women’s Open respectively, used her 7-iron to hole-out for eagle on the second hole and added four more birdies on the fifth, 14th, 15th and 17th holes.

She said: “I wasn’t hitting the ball that well today but I got a good break on the second hole. I hit my drive way right, but it hit the trees and kicked left, so I had a good line to the pin and actually holed my shot there. I thought, I’m going to keep it going. I holed a couple of good putts and that was it. I always enjoy being in Spain and spend a lot of time here. The grass is pretty similar to what we have in Finland and I like the layout and the course.”

Grant, who has Swedish DJ Kaaze acting as her caddie, carded eight birdies and a solitary bogey. She said: “I had a really good time with my caddie and got into a nice flow. I like the course and I hit my driver very well today. As long as you are on the fairways, you have a lot of chances to make birdies and I managed to roll some putts in. I think my last putt was probably the longest one. It was nine metres from off the green, so that’s really exciting, because you can see it going in all the way.”

This is her third LET tournament of the year and her first since South Africa. She added: “I’ve been home in Helsingborg, Sweden, seeing my coach, my family and friends, taking some time off and enjoying the Swedish Spring.”

Fellow second-placed player Fernandez, 17, from Madrid, a member of Europe’s winning PING Junior Solheim Cup team last year, carded five birdies in a bogey-free round and said afterwards: “I’m very happy with my score. I played the same as yesterday but today I made more putts. Tomorrow I hope to play the same, because today I hit all the fairways and I’m playing well.”

Pelaez from Malaga also shot a 67 and she commented: “I think I had a great day. I started pretty well. I had a birdie and an eagle on the back nine and I think that gave me a boost of energy. My brother and I were vibing. We just hung in there at the end because I missed a couple of putts, so it was a rough ending, but I’m very happy with the score. I like the greens and I feel like I can read them pretty well and I have judged the speed well.”