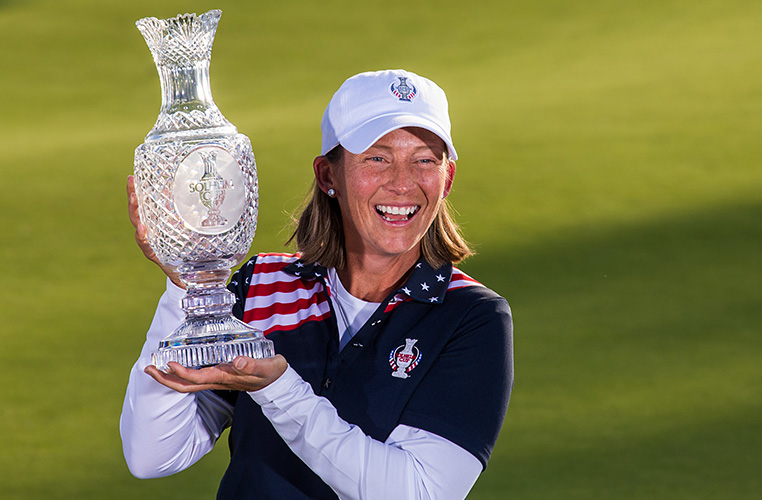 “As soon as Mike Whan asked me to be the USA captain, I knew that I wanted Angela by my side as an assistant captain,” said Hurst. “Her fire, her passion, her determination, her love for the Red, White and Blue, those are all qualities I want on my team. I have no doubt that Angela will be a tremendous asset to the team as we look to win back the Cup in Toledo next September.”

“My six Solheim Cup teams are among the highlights of my career and I’m excited to take this next step as an assistant captain,” said Stanford. “I’m really looking forward to being back in the Team room, where we’re all after the same goal and we all have the same passion to win the Cup. This is an incredible honour and I can’t thank Pat enough for having me on her team.”

Hurst and Stanford both played on the 2007 American Solheim Cup team that defeated Europe at Sweden’s Halmstad Golf Club. They paired together for a 4-and-2 foursomes victory over Iben Tinning and Bettina Hauert.

“Pat took me under her wing from the beginning of my career and I’ve learned so much from spending time with her,” said Stanford. “There’s this ease about her, but she’s still so confident and positive. I loved getting to be her playing partner in Sweden and now I’m so excited that she picked me to be her assistant captain in Toledo.”

Prior to joining the LPGA Tour, Stanford was a four-year All-American at Texas Christian University, where she won nine collegiate tournaments. She is a 2000 TCU graduate with a degree in Speech Communications.

The Solheim Cup is named in honor of Karsten Solheim, the founder of Karsten Manufacturing Corporation, which makes PING golf equipment. In 1990, the Solheim family, in conjunction with the LPGA and the LET, developed the concept and became the title sponsor for the Solheim Cup. Today, the Global Partners of the Solheim Cup are PING, Rolex and Marathon Petroleum.

Inverness Club, located in Toledo, Ohio, has forged a place of distinction in professional golf. Opening in 1903, the historic club has been the site of twelve championships, including four U.S. Opens and two PGA Championships. Byron Nelson, who served as head golf professional from 1940 to 1944, recognized Inverness Club as his home course. S.P. Jermain, their first Board President, was credited with conceiving the idea of the Ryder Cup. The championship course was designed by the renowned architect Donald Ross. Inverness Club successfully hosted the 2019 U.S. Junior Amateur and is the host site of the 2021 Solheim Cup.