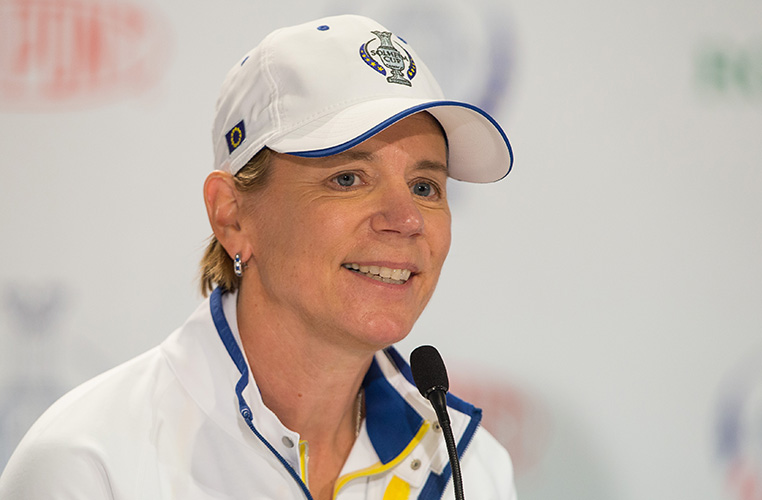 Former Rolex Rankings No.1 will captain Team Europe next year in Ohio

September 1, 2020 – With a year to go, the LET and PING have named Annika Sorenstam as the captain of the 2021 European PING Junior Solheim Cup team.

Team Europe will face the United States in the 11th PING Junior Solheim Cup, which will take place immediately prior to the Solheim Cup at Inverness Club in Toledo, Ohio, next September.

Annika is regarded as one of the best golfers in history of the game. She started playing golf in Sweden at the age of 12 and achieved success at the highest levels. Over a 16-year Hall of Fame career, she earned 89 worldwide wins, including ten major championship titles.

The former Rolex Women’s World Golf Rankings No.1 is an eight-time Solheim Cup player, a three-time vice-captain and led the 2017 European Solheim Cup Team at the Des Moines Golf and Country Club in Iowa.

Annika’s involvement in junior golf started when she created the ANNIKA Foundation in 2007, with the goal of developing women’s golf around the world and encouraging children to lead healthy, active lifestyles. The ANNIKA Foundation hosts seven global events for junior girls each year, including the ANNIKA Invitational Europe. Indeed, 45 ANNIKA alumnae and members were represented in the recent AIG Women’s Open field.

The biennial PING Junior Solheim Cup, which was inaugurated in 2002, is designed to give junior golfers from both sides of the Atlantic the opportunity to gain international match play experience whilst at the same time meeting and sharing experiences with the professional players in the Solheim Cup. Five girls who played in the 2019 junior event are still young enough to play again in 2021.

Many stars featured in the PING Junior Solheim Cup before excelling in the Solheim Cup. Carlota Ciganda, Azahara Muñoz and Caroline Masson triumphed as amateurs before lifting the Solheim Cup crystal trophy, while 10 members of last year’s victorious 12-woman European side at Gleneagles had previously played on a PING Junior Solheim Cup team. The recent AIG Women’s Open winner, Sophia Popov, played in the tournament in 2009 with Lexi Thompson and Jessica Korda playing in the US team that same year. Indeed, Emily Kristine Pedersen, the recent Tipsport Czech Ladies Open champion and leader of the LET’s Race to Costa del Sol, played for the European junior side in 2013.

Annika said: “I am really excited to captain the Europeans in next year’s PING Junior Solheim Cup. The Solheim Cup was a very important part of my career. Since stepping away in 2008, I’ve been focused on my Foundation and giving back to the next generation of junior girls. In the last decade, more than 90 per cent of the players on the US and European Solheim Cup teams have played in at least one of our seven global junior events. I already know most of the girls who will be aiming to qualify for next year’s European team and I look forward to working with them in Toledo.”

PING Chairman, John A. Solheim, commented: “We’re so excited Annika has accepted the role of PING Junior Solheim Cup captain for 2021. She holds a special place in our hearts, having watched her shoot 59 in our own ‘backyard’ at Moon Valley Country Club in Phoenix almost 20 years ago on her way to winning the Standard Register PING. We’ve always admired and appreciated her on-going support of women’s and girls’ golf, especially all she has done to raise the stature of the Solheim Cup. Her respect and influence extend well beyond her Hall-of-Fame career on the golf course. Annika’s leadership skills and ability to connect with junior golfers will make her a tremendous captain. The girls who earn their way onto the team will benefit greatly in many ways from playing under her guidance.”

Alexandra Armas, Chief Executive Officer of the Ladies European Tour, said: “We are delighted that Annika has accepted the PING Junior Solheim Cup captaincy. The young competitors are going to have an amazing opportunity to spend time and learn from undoubtedly, one of the best minds in the game.  I am sure they will all be excited to be part of the team in 2021.  Annika has an incredible commitment to growing the game and junior golf and this will part of her amazing legacy.  I am sure some of the players in the team will be stars of the future and carry the learnings from the 2021 matches into their careers.”

Both the European and United States PING Junior Solheim Cup sides will include 12 juniors who must not have turned 18 before January 1, 2021 (born 2003 and later) and must not be enrolled in a collegiate golf programme. The selection process for the European PING Junior Solheim Cup team, including confirmation of qualifying events, venue and dates, will be announced shortly.

About the PING Junior Solheim Cup:

The PING Junior Solheim Cup 2021 is to be played in Ohio, immediately ahead of The Solheim Cup, which is staged at the Inverness Club on 4th – 6th September. The PING Junior Solheim Cup is a team match play competition between Europe and the United States, each team featuring the best 12 female golfers aged 18 years and younger. The competition consists of 24 matches: six foursome matches, six fourball matches and 12 single matches. The aim of the competition is to give juniors the opportunity to further their golfing careers by playing match play at a high level and also for the participants to meet, learn and be inspired by the professional players playing in The Solheim Cup. The PING Junior Solheim Cup was established by PING Chairman and CEO, John Solheim, back in 2002 and has since developed a deserved reputation for showcasing the talents of the world’s best female junior players, with the likes of Carlota Ciganda, Bronte Law, Charley Hull, Georgia Hall, Lexi Thompson, Jessica and Nelly Korda all playing in the match before graduating to The Solheim Cup.