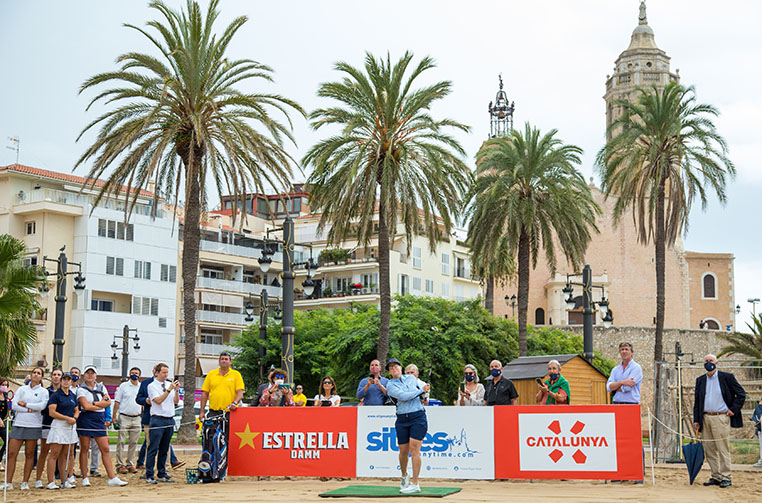 The Estrella Damm Ladies Open presented by Catalunya teed off with a Nearest the Pin competition on the beach in Sitges on Wednesday.

Beth Allen from the United States fired her ball closest to the flag on the genuine sand green, while Ana Pelaez of Spain and England’s Alice Hewson were the second and third closest to the pin respectively.

Former Race to Costa del Sol winner Beth Allen, from San Diego, said: “It’s great to be back in Sitges. I’ve played in this event every year and I enjoy the town and I like the golf course. It’s even better to be here again after we missed last year. I’ve been working really hard, so hopefully I’ll get a good result this week.”

Ana Pelaez, from Malaga, who will be playing in her third LET event, as well as her second event as a professional, commented: “I was here last year but I wasn’t able to play the course, so I’m very happy to have the chance to compete.”

Alice Hewson, the 2020 Investec South African Women’s Open champion, said: “I love playing golf in Spain and I’ve been all through my career. This is my first time in Sitges and the town is lovely with all the old buildings. It’s fantastic to be here. I’ve had a couple of weeks off, so it’s been nice to take a break but I’m hoping to kick off where I left off.”

The 126-strong field includes players from 26 different nationalities preparing to launch their bid for victory at the Estrella Damm Ladies Open Presented by Catalunya.

With this year’s Race to Costa del Sol leader Atthaya Thitikul not in action this week, there is the perfect opportunity for her nearest challengers to make up ground heading into the final weeks of the season, with Steph Kyriacou, Sanna Nuutinen and Marianne Skarpnord all looking to close the gap.

With 31 players in the field that have secured an LET victory in the past, there will be no lack of quality on show this week in the Mediterranean, with competition at the top of the leader board likely to be as tight as ever.

This year, the players will be playing the new Terramar21 design by Martin Ebert, where the first, fourth and sixth tournament holes have been reformed around a new lake, which is the largest on any course in Catalonia. The course will play as a par 72 for the tournament for the first time this year. In the last three editions, the course played as a par 71 and the record 18-hole score was 63, eight-under-par.

The tournament proper tees off at 8.15am on Friday.