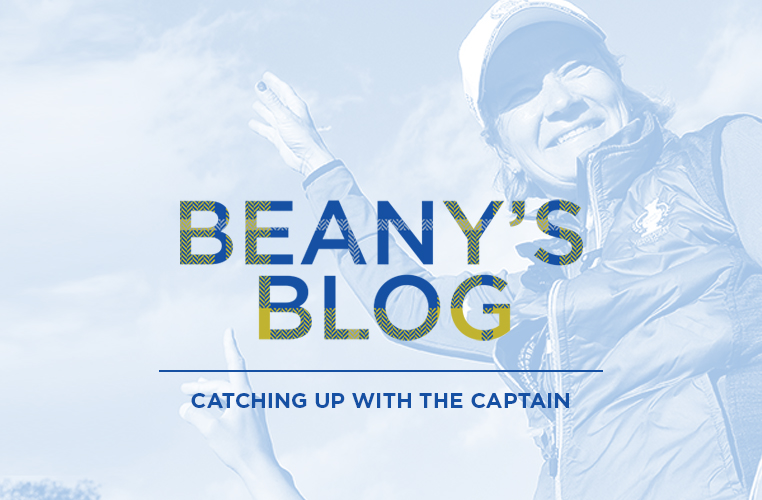 Hello everyone and welcome to my first blog! This is the first in a new series where I will be updating you all every month about what I have been doing and my thoughts in the lead up to the 2021 Solheim Cup. It is an honour to be Team Europe Captain once again and with 128 days to go, I am looking forward to defending the trophy at The Inverness Club!

Life in lockdown. I want to start this month’s blog with an update on what I’ve been doing so far this year. We’ve been in lockdown for most of this year, so I’ve spent most of my time at home in Scotland and I haven’t been able to travel outside of my local area. The restrictions have begun to lift slowly, but thankfully I’ve been able to watch a lot of golf on the TV. With the LPGA tournaments happening, I’ve been sitting down and watching that to see how some of the players have been getting on. I keep in touch with the players in the US and have also had a few calls with my Vice Captains over the winter months. It’s been exciting to see the LPGA Tour get going and with the LET season starting soon, these next four months will be key to who makes the team.

Bubbling away in the background. Even though I haven’t been able to meet with many people this year, there’s still a lot of preparation for the Solheim Cup going on in the background. There are so many elements to sort out before the tournament takes place that need to come together for the Team to be successful. We’ve been looking at the clothing, the golf bags, the hats. We’ve had conversations with nutritionists and physios. It’s been nice being involved and there’s lots of little things to do that keep you busy!

Getting out on the course. In Scotland we’ve been able to go out on the golf course despite the lockdown, but I haven’t been able to play as much as I’d have liked this year. The weather has been awful! In January and February, I had to rearrange games because every day we meant to play the weather wasn’t ideal. It’s been getting a bit better in recent weeks, so hopefully I am able to play a bit more now and get back to practicing. My plan is to start my LET season in June, so I’ve got a bit of time between now and then to get out and play.

Europe to wear PING Apparel. Earlier this week, we had a fantastic announcement that PING Europe will be the official apparel supplier for Team Europe at the Solheim Cups in 2021 and 2023. It’s very exciting to have the PING apparel this year!

The designers have been great to work with. The designers have come up with great designs for the tournament with little twists on where we’re playing. We are incorporating the Ohio state flower within the designs and I’ve enjoyed getting involved with the patterns. We also have some nice colours, it’s not all blue and yellow but we’ll be traditionally blue and yellow on the final day with a couple of twists for the first few days. The designers have been great to work with, they’ve been amenable to our changes and I’ve really enjoyed the process.

PING are fantastic supporters of the women’s game. I’ve used PING clubs for the past five years and they’re a great company to work with. They’re still very family-run and the staff are great. You get a great service from them! For PING, who are fantastic supporters of the women’s game, to want to come in and do the clothing, it is a great fit for the whole event!

Communication with Vice Captains. As I mentioned earlier, I’ve been keeping in touch with the Vice Captains throughout the winter months. But now we’re getting close to the Solheim Cup and with the season starting on both Tours, we’ll be in touch more. We’ve started to schedule in more meetings and things are starting to ramp up. We will have lots of calls and chats to get all of our opinions on how we think everyone is playing.

Everyone will be watching the action. Whether that’s on the LPGA or the LET. Kathryn Imrie lives near where the US Women’s Open is being played in June, so she’s going to go and watch the players there. Dame Laura Davies has been doing her commentary for the TV, so she sees a lot of the golf being played and Suzann Pettersen is sitting with her feet up waiting to have her baby, so she is also watching lots!

What I learned from 2019. With this being my second time as Team Europe Captain, there are certain aspects that I learned and took away from what happened at Gleneagles in 2019. You think about what you might do differently, but most of it is to do with the week of competition rather than in the run up. The key thing for me from the last Cup and for this one is communication with the players. It’s slightly different this time because I’m not out there and playing on the LPGA, so I don’t see everyone as much as I did in 2019. That is where these next few months I’ve got to try and keep the players involved as much as possible by sending them messages, letting them know what’s going on and what I think.

Captain’s Picks. A unique aspect of Team Europe in 2021 is the fact that this time around we have six picks, which is too more than last time. Will that be good? Will that make it easier? Or will it not? I’ll be able to tell you nearer the time! To check out the current standings of Team Europe, click here.

I’ll make the ultimate decision. I think generally the first four picks will ultimately pick themselves based upon form and how well people are playing. It’s the last couple of spots where it depends a lot on who is already in the team. I’ll have to take into consideration a few factors such as what types of players there are, what the personalities are like and whether we have players who are rookies or more experienced. I think all of those things play into who we’re going to be looking at for the last couple of picks. I’ll get the opinion of the three Vice Captains, as we usually do agree and I’ll make the ultimate decision, but I’d be pretty silly not to listen to them!

Trip to the ANA Inspiration. One of my highlights from the past month was being fortunate enough to be able to fly over to the United States and attend the first Major of the year. I attended the ANA Inspiration and had Kathryn alongside me – it was the first time we’d seen each other since 2019!

It was great to be able to see all the players. It felt like a long time since I had seen them – especially the players who live in the US – but it was nice to go out and catch up with them all. When you’re watching on the TV you can see the scores and how people are playing but it makes a difference and it’s nice to see them in person. You’re able to pick up a bit more from the interaction that you have. It was reassuring being out there, seeing them all and answering any questions that they might have about the Solheim Cup.

There’s lots of competition. Somebody I spoke to was last year’s AIG Women’s Open champion Sophia Popov because I hadn’t got the opportunity to speak to her. It was nice to have a chat with Sophia, get to know her a little bit more and also watch her play. There were several performances that I was impressed with at the ANA Inspiration. The first was that of Denmark’s Nanna Koerstz Madsen, who had a great final day shooting a round of 66 to finished T3. A recent Solheim Cup stalwart Charley Hull played well throughout the tournament, while Mel Reid – who was a Vice Captain in 2019 – has been showing some good form too. Overall, it is looking very positive for the Europeans at the moment, there were a lot of good performances and there is great competition for those spots on the team.

That is all for now. See you in May!