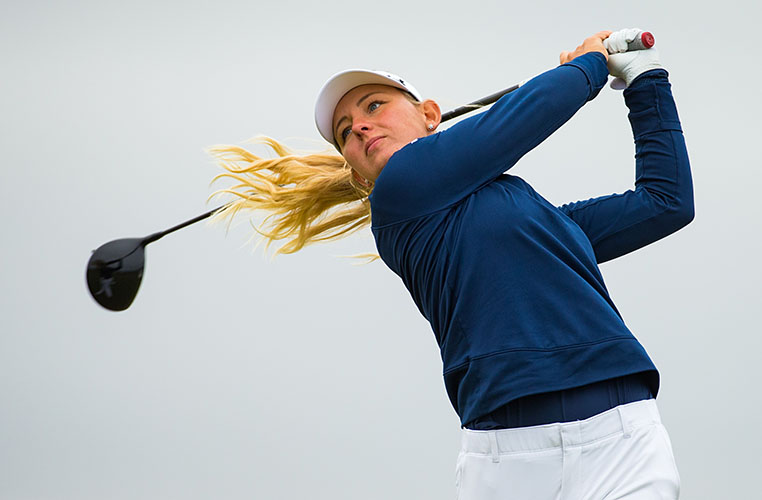 Emily Kristine Pedersen has shot to the summit of the LET’s Race to Costa del Sol after securing a joint runner-up finish in the Aberdeen Standard Investments Ladies Scottish Open at The Renaissance Club.

The 24-year-old Dane, who finished T50, T37 and T7 in the Geoff King Motors Australian Ladies Classic, Women’s New South Wales Open and Investec Women’s South African Open respectively earlier this season, started the final round five shots behind the overnight leader Azahara Muñoz from Spain, but carded a sublime back nine of 33 in a final round of three-under 68 to get into a four-way play-off with Muñoz, Cheyenne Knight and eventual winner, Stacy Lewis, from the United States, on a 72-hole total of five-under-par.

Pedersen, who won her sole title on the LET at the 2015 Hero Women’s Indian Open, in the same year that she was the LET Rookie of the Year, climbed 24 positions to take her points total to 230.28.

The 2017 European Solheim Cup player is on a bit of a roll. After a couple of frustrating seasons, she won a men’s professional event on the ECCO Tour in Denmark and she also won an amateur event on the Danish Golf Union’s Elite Amateur Tour during lockdown. She has returned from the break in blistering form and full of confidence.

Meanwhile, Azahara Muñoz entered the Race in fourth position, which puts her in prime position to contend for the inaugural title when the final stop, the Andalucía Costa del Sol Open de España Femenino, takes place at her home club, Real Club de Golf Guadalmina, located in the Malaga town of San Pedro de Alcántara. The Solheim Cup star became the first Spanish player to win the national Open when the tournament last took place at her home club, in 2017.

With a tie for 12th, Scotland’s Kylie Henry climbed nine places, moving from 15th to sixth position on the Race to Costa del Sol official rankings.

Denmark’s Nanna Koerstz Madsen shot a six-under-par 65 in the final round for the best 18-hole score of the week to tie for fifth place in Scotland and she entered the Race in seventh position.

Another big mover was Dutchwoman Anne van Dam, who climbed 11 places from 21st into 10th following T5th in the Australian Ladies Classic and T22nd in the Scottish Open.

The biggest mover in the Race, however, was Eleanor Givens, who climbed 60 positions from 111th to 51st following a tie for 33rd in the Scottish Open. With her performance, she qualified for the AIG Women’s Open next week and will have another opportunity to make further gains when the first women’s major of the year takes place at Royal Troon.