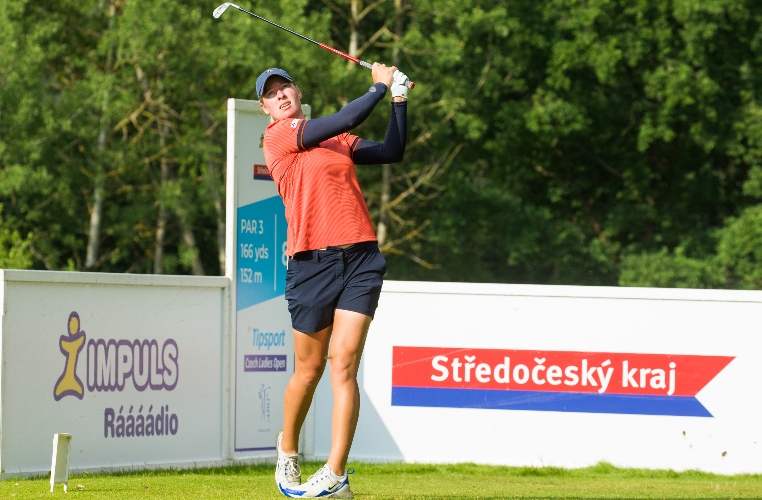 Denmark’s Nicole Broch Estrup got off to a blistering start at the Tipsport Czech Ladies Open firing an opening round of 65 (-7) to lead by one stroke.

The 29-year-old began from the 10th tee and battled with difficult weather conditions including rain and wind during the early part of her round.

The Danish star dropped one shot on the 14th but soon found her feet making birdies on 16 and 18, before rolling in six in her final eight holes including consecutively on her final three holes to reach seven-under-par.

“I feel really good to go six-under through the back nine and to finish with three birdies,” said Broch Estrup, who the 2015 Helsingborg Open on the LET. “It was one of those days where when I hit a bad shot, I got away with it, and I got a couple of good bounces, so I felt like I dealt really well with myself out there.

“I could feel my body getting tense which is something I’ve struggled with for a long time, but Kasper – my husband – on the bag said it was a good day and I should feel proud of myself, so I am.

“We had a couple of really heavy showers out there, and my only bogey came when the first one hit, but you just have to deal with whatever is hitting you. On the back nine, the rain eased and the wind switched to our advantage, so it wasn’t that lucky but it turned out a bit lucky in the end.

“I don’t think I’m as long as I used to be when I was younger, but still being one of the longer hitters it’s definitely advantage, especially in this weather.”

One shot back in second place is Austrian amateur Emma Spitz, who produced a round of 66 which included seven birdies.

And the 22-year-old, who is playing in her first LET event, enjoyed her day at Royal Beroun Golf Club with a local caddie by her side.

“It was a lot of fun, the rain was a bit heavy when we started out, but me and my caddie managed it really well,” said the two-time PING Junior Solheim Cup player. “I found a local 16 year-old boy to caddy and he was so much fun and he helped me out.

“I played really solidly. I hit 17 greens which really helped, and I was able to make a few putts too, so that was nice. One of them was really long like 16 metres, and all the others were between 18 feet and five feet, so a mix of all.

“I’m excited to play here at my first LET event, and I have the opportunity to play next week too so that’s going to be fun, and hopefully I can keep playing like this and it’ll work out.”

In third place on five-under-par is Spain’s Teresa Diez Moliner, who set the early clubhouse lead after sinking seven birdies on her way to a 67.

“It was a really nice day today, I hit a lot of fairways, hit a lot of greens, and made a lot of birdies too, so it was a good day,” said the rookie, who is making her fifth LET appearance of the season.

“On this course you’ve got to hit a lot of fairways and a lot of greens, so that suits my game. I like playing on both the LET and the LET Access Series this year.

“I started playing LETAS at the beginning of the year and made a couple of cuts, and now I’m getting into LET events too so that’s awesome. Tomorrow I’ve just got to keep playing the same and continue to have fun.”

Seven players are in a share of fourth place having signed for rounds of 68 (-4) including Spanish trio Elia Folch, Paz Marfa Sans and Luna Sobron Galmes.

It was a bogey-free round for Folch, who sunk birdies on the fifth, seventh, 10th and 18th holes on day one.

“I finished and I didn’t know what my score was,” said Folch. “But I played really well and the four birdies I got them close to the pin and made the most of the reachable par-fives, so it was good.

“I was pleased with my mind today, I struggled in the last tournament, so I focused on being calm and getting some confidence back and it happened today. I’m planning on doing the exact same thing tomorrow.”

While Marfa, who is in her rookie season on the LET, had only one blemish on her scorecard with a bogey at the second hole.

The 23-year-old rolled in five birdies to finish on four-under-par, which is even more impressive as she had to change her driver before the tournament.

“I started out really relaxed, my driver broke just before I got here so I had to change it to an old one I had, so I was trying to hit the best drives I could,” she said.

“I started pretty solid, I hit the fairways, hit the greens and tried to leave myself some birdie chances and some of them went in. I was just trying to keep calm during the round, and it went pretty well.

“Honestly, the driver that broke was pretty old so I just told myself that sometimes you need a change, so I saw my coach and we worked on some things and made sure I was confident on my swing.”

And it was a similar story for Sobron, who has a new putter in her hands this week, and with six birdies on her card it seems to be paying off.

“I played really well, I feel really comfortable with my swing, I made some changes at home and now I’m feeling really good,” said the 28-year-old, who has had two top-10 finishes in 2022.

“I also changed my putter so now I’m playing with a blade putter, I need to be more confident with it but I like it because I know the balls can go in now, so we’ll see how it goes.

“I like to have my hands forward when I putt, so this putter gives me that feeling, and for me it’s better and it seems to be working.”

They are joined on four-under by Sweden’s Johanna Gustavsson, who is third in the 2022 Race to Costa del Sol, and Czech trio Jane Melichova, Sara Kouskova and Klara Spilkova.