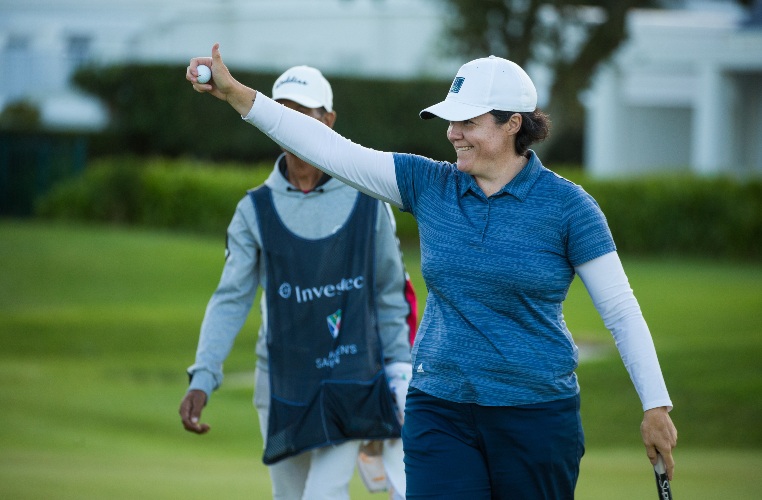 Becky Brewerton continues to lead the way at the Investec South African Women’s Open, with the Welsh star holding a five-shot advantage heading into the final day in Cape Town.

It wasn’t quite the birdie-fest that her second round produced, but in many ways, it was just as an impressive performance from the two-time Solheim Cup star, as she kept things steady up front while those behind her began to falter.

On a day when only one player shot below par – with Paz Marfa Sans firing 70 (-2) – a third round score of 74 (+2) was something of an achievement for the overnight leader on day three, with conditions lending themselves to a damage limitation exercise.

And after a day battling against the swirling winds, Brewerton was delighted with her day’s efforts, as she remained head and shoulders above the rest of the field.

“I’m probably as pleased with today’s effort as I was with yesterday’s, which is quite weird to say considering there was an eight-shot difference in my score,” she revealed.

“It was brutal out there and I think it was just a day where everyone knew you were going to make mistakes and be in difficult positions, but you just had to try and minimise it, and I utilised the punch shot again very well.”

“Today always looked like the weather was going to be quite bad, as tomorrow does as well – it’s exhausting but the best thing I did was to not try and brace against it but just go with it and hit the punch shot and keep the swing smooth If possible.

“The most difficult thing was putting, especially if you’re going across the breeze, because if you had the break going one way and the wind going the other it was quite hard to work out which one was going to have the most effect, so some of them were a bit hit-and-hope and they paid off the majority of the time.”

Brewerton managed to keep her shots out of harm’s way for the majority of the day in South Africa, with pars being the order of the day for many of her 18 holes, with the two dropped shots coming on eight and 14.

For the most part though, it was conservative golf that saw her maintain her strong advantage heading into the final day, with the 39-year-old rolling back the years to leave herself on the brink of a memorable return to the winner’s circle.

The two-time Solheim Cup star has had a tricky time over the last few years, with the possibility of giving up the game luring into view after a tough time of it in 2021, as she finished 103rd on the Race to Costa del Sol.

But after turning things around at Q-School to earn her card for this year, Brewerton has rediscovered the sort of form that earned her the Order of Merit title in 2009, as she made light work of the blustery conditions around Steenberg Golf Club.

You have to go back 13 years for the last time Brewerton lifted silverware aloft on the LET, as she took victory at the Open De España Femenino, but with a strong advantage heading into the final day, she is relishing the challenge that awaits tomorrow.

“I don’t think I’ll have any problems going to sleep tonight, I’m exhausted, but tomorrow will just be another day of trying to keep the ball low. I fully expect the breeze to be just as strong, if not stronger tomorrow, so I’ll be mentally prepared tomorrow,” she continued.

“In those conditions you have to accept that things might go wrong, but you just have to try to keep the ball down and keep it in play as much as possible and try to leave yourself putts into the wind because they’re really tough on these greens.”

Brewerton’s nearest challenger is Maiken Bing Paulsen heading into the final round, with the Norwegian registering an admirable 73 (+1) on Friday, which keeps her in contention after 54 holes.

The 25-year-old, who began life on Tour in 2020, had a steady day in the windy conditions, and battled back from two dropped shots in her first three holes to keep herself in with a fighting chance in South Africa.

A birdie on the sixth was followed by another bogey on ten, before a strong finish saw her pick up a shot on 16, and with it make herself one of only two players who finished under-par for the last six holes – with Lucie Malchirand the other player to do so.

“The wind has normally been my weakness, so I’ve been working really hard on it, I think I’ve got better at it and I’m swinging with the wind and not trying to force anything,” Paulsen said.

“My mentality this week was to go in and try to learn, and I had a lot of fun today which was strange considering the conditions – and that’s going to be my main focus going forward.

“I put a lot of pressure on myself in the last few events because it’s my third year on Tour but I’m just going back to the process and trying to get better.

“I like the greens when they’re fast, so I’ve been enjoying it – although I did miss a one-footer – but I think the greens are good, it makes the course tougher which I find a fun challenge.”

Felicity Johnson has also kept herself in the mix heading into the final day at Steenberg Golf Club, with the 36-year-old playing a respectable 75 (+3) in her third round.

It was an up and down day for the Englishwoman, who picked up and then dropped a shot in her first two holes, before moving up as high as -4 after five holes after two more birdies on four and five.

But just like so many before her, Johnson struggled after the turn, with a bogey on ten before two more dropped shots on 13 and 15 saw her slip back from the leader but was still enough to keep herself in contention heading into Saturday.

“I enjoy playing the wind, but maybe today was a little more than I enjoy – it was tough out there – from the first tee until the 18th it was pretty tight – so there was a lot of concentrating out there today,” Johnson said.

“It was pretty consistent but there were gusts which saw me go over the back of 18, but when the wind is up and someone has a lead it lends itself to those chasing more, so we’ll go out there tomorrow and see what happens.”

France’s Emma Grechi also finds herself on +1 for the tournament as it stands, as three birdies and three bogeys saw her secure a level-par 72, with a number of clutch putts seeing her clamber up the leaderboard.

Four players sit a further shot back after 54 holes, with Malchirand (73), Leonie Harm (75) and Magdalena Simmermacher (77) all ending the day two shots over-par.

They are alongside home favourite Lee Anne Pace, who shot 74 (+2) on Friday, with the reigning Investec South African Women’s Champion pleased with her day’s efforts and is looking forward to another testing day tomorrow.

“It was about a four-club wind,” Pace began. “You don’t know if you’re going into it sometimes or if it’s off the side, so it was very tough.

“The tees have moved up but it’s still playing long because of the wind, so it’s really tough, but I quite enjoyed it because you have to hit some shots – keep it low – it’s my sort of golf.

“I think I got a bit unlucky out there today, but otherwise I’m happy with my score and I believe I’m still in it. I’m managing myself a lot better, I’m not getting as frustrated anymore, and if a few more putts drop tomorrow it could be interesting.”

An astonishing round of 70 (-2) saw Paz Marfa Sans rocket up the leaderboard on Thursday, with the Spaniard moving into a share of ninth spot, alongside Tiia Koivisto (74) and Casandra Alexander (75), while amateur Kiera Floyd, Madelene Stavnar and Linn Grant sit on +4.