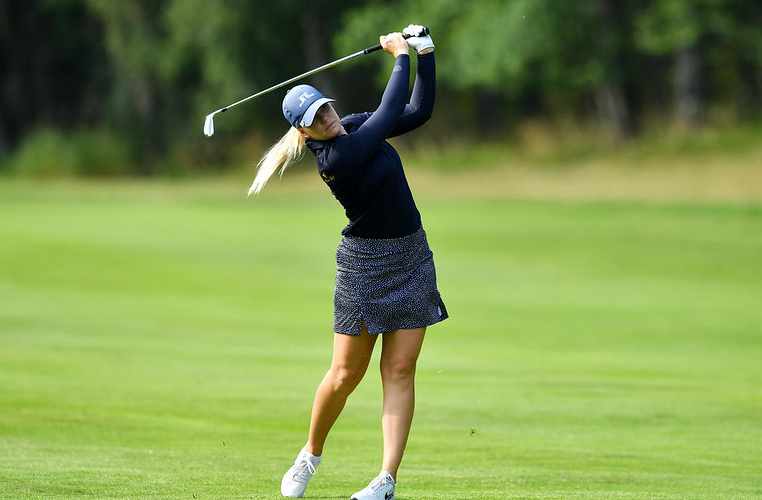 Finland’s Matilda Castren carded a round of 69 to lead by one stroke after the second day of the Gant Ladies Open.

The 26-year-old opened her round with a bogey on the first hole but made a birdie on the eighth to make the turn in 36.

Castren then rolled in back-to-back birdies on 16 and 17 to post a round of 69 and leave her two-under-par for the tournament with one day left.

She said: “The first two days have been great. The fans have been awesome, and it is cool to be in front of a home crowd – I have never done that before. I knew I needed a good round today. It was a bit of a struggle hitting greens, trying to find the fairways and making putts, I left a lot of putts short. Going from even par, scrambling for pars on a lot of holes and then making a couple of birdies coming in was really nice and it kind of changed everything and how I feel about the round.”

Castren secured her first win on the LPGA at the 2021 LPGA MEDIHEAL Championship in June, but the Finn is not putting any expectations on herself tomorrow.

She added: “I have already mentally prepared myself to not have many expectations and to just come here and play my game and if I do not win, it is not the end of the world. I know I am going to hit some good shots tomorrow and I know there will be some bad ones, so I will just take everything as it goes and try to give myself a chance for a win. There is a lot at stake, so it would mean everything to me to win.”

One stroke further back is India’s Diksha Dagar who also posted a round of 69 to be one-under-par for the tournament.

The 20-year-old made an eagle, four birdies and three bogeys to move into second place outright in the leaderboard.

Dagar said: “I started very well today, and I was striking the ball very good. On the front nine I was struggling a little bit because the wind was challenging. It was a tailwind and then it would suddenly change to a headwind. Let’s see tomorrow and I will try to play my best.”

Dutch golfer Pasqualle Coffa carded another level-par round to leave her T3 for the tournament alongside Finland’s Ursula Wikstrom and Thailand’s Atthaya Thitikul.

A trio of players sit one shot further back on one-over-par including India’s Tvesa Malik, Finland’s Kiira Riihijarvi and France’s Emma Grechi. The cut fell at +9 with 63 players making it through to the final day.