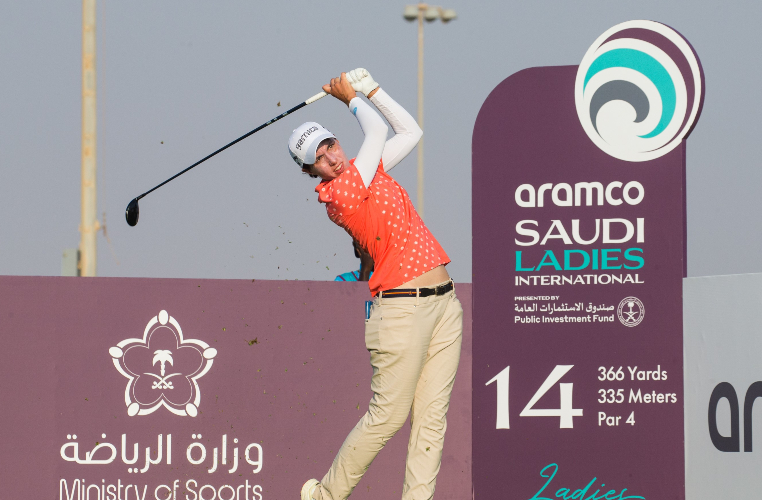 Spain’s Carlota Ciganda and New Zealand’s Lydia Ko are tied at the top at the end of the first day of the Aramco Saudi Ladies International presented by Public Investment Fund.

After a delay to the first round because of morning fog, play got under way one hour later than planned at Royal Greens Golf & Country Club.

And it was world number seven Ko, who began her round on the 10th tee, who took advantage of the morning conditions carding six birdies and one bogey for a round of 67 (-5) to post the best score.

“I didn’t drive it very well, but I think every time I did miss it, I wasn’t in that much trouble. It was a combination of being lucky when I didn’t hit it good. My irons were really good, so I had a lot of opportunities, and I holed a few good putts. Hopefully, I will sharpen up the tee shots tomorrow,” said the two-time Major winner.

“The course itself is really pure. The greens aren’t rolling that fast but it’s really pure and it’s not bumpy. The track itself is a good one because it has a good combination of holes.

“I’m pretty sure it will be pretty breezy tomorrow and it will make it a little bit cooler to be outside at least. I think I just have to be aggressive. Even though it is windy, I think there are some gettable holes, so just trust my game and see where that puts me.”

From the afternoon groups, it was three-time Solheim Cup winner Ciganda who climbed to the top of the standings.

The four-time LET winner got off to a blistering start with six birdies and one bogey on her front nine to make the turn in 31.

With the wind picking up in her final nine holes, Ciganda dropped a shot on the 17th but bounced back immediately with a closing birdie on 18 to also finish on five-under-par.

“It started very well with two birdies in the first two holes, I bogeyed the third but then I hit some really good shots on five and six,” said the two-time LPGA Tour winner. “I played really solid and I’m really enjoying the course, I managed to shoot five-under on the front nine with six birdies – I can’t remember the last time I did that so that made me quite happy.

“The back nine was windier, but I managed to get a few birdie chances on 13, 14 and 15, then I managed to birdie the last which is always nice.

“I think in the afternoon it gets windy and you get some side winds that are tricky, but the more you play it the more you know what it’s going to do. I think if you play it in the morning it might be a bit easier with no wind, so I’m excited to go out tomorrow and try to post a good score.”

Three players are in a share of third place including Swedish duo Johanna Gustavsson and Linnea Strom, who both shot rounds of 68 (-4).

Gustavsson got on a roll on the back nine making three consecutive birdies on 12, 13 and 14 while only dropping one shot.

“I feel like I played pretty good today. I hit good drives which helps, some holes are a bit longer, so it makes it a bit easier. A pretty solid day overall,” said the 28-year-old.

Strom began her round with a birdie on the 10th before dropping a shot on 12 but she rolled in another birdie on 13 and added a further three on holes two four and eight.

“It was a good round. It was very hot this morning, so my focus today was to stay patient, drink lots of water and try and stay cool and save some energy for the back nine,” said the 25-year-old.

“On the back nine it started to blow a little bit more which makes the course a little bit trickier, but it felt nice because it was cooler. Overall, I played very steady, I was good off the tee and hitting my irons good. I gave myself a lot of birdie opportunities.”

The Swedish duo are joined by Switzerland’s Kim Metraux who also carded a round of 68 with five birdies and one bogey.

“I played solidly, I hit a lot of fairways and greens, so it wasn’t too stressful which was nice and enjoyable. I hit a lot of greens and a few putts dropped too. It was good to take advantage of a few holes without wind. The greens are fairly receptive too, so it was nice to be able to go at the flags,” said Metraux, who has her dad Olivier on the bag this week.

Argentina’s Magdalena Simmermacher and Wales’ Becky Brewerton sit one shot further back in T6 on three-under-par.

Five players finished two-under-par for the day including last week’s winner on the LET, Bronte Law, who also produced one of the moments of the day when she made a hole-in-one on the third.

The 2021 Dubai Moonlight Classic champion started her round with a birdie before the ace on the third and despite a rollercoaster back nine the English star is tied for eighth.

Three groups were unable to complete their first round due to the delay and will finish on Friday morning.