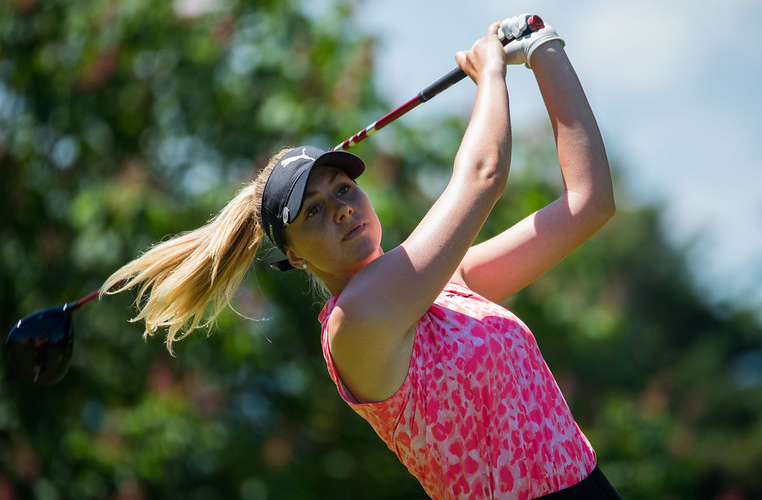 Cowan, who has 18 top-ten finishes on the LET, made consecutive birdies on her final two holes to claim the clubhouse lead of five-under-par.

The 25-year-old started the 2021 LET season in excellent form with a T23 finish at the Investec South African Women’s Open and she followed that up with T10 at the Ladies Italian Open.

“I feel great, I bogeyed my 16th hole and three-putted which wasn’t great. In my final two holes I wanted to push a bit and I did that,” Cowan said.

“I’ve been playing really good since coming back on Tour. My game feels like it is trending in the right direction, we’ll see what comes tomorrow but I’m feeling good about it.

“It would be amazing to my maiden LET victory, I’ve been waiting a while and come close a few times. It would be great, but we’ll see what happens.”

It was another solid day for Dimmock as she carded a round of 70, including two birdies, to join the German at the top of the leaderboard.

“I actually hit it a lot better out there today than I did yesterday. I went on the range after I played and worked on a few things,” said Dimmock. “I just could not buy a putt and I had an annoying three-putt on 16, but apart from that I’ve got no complaints. Hopefully, the putts go in tomorrow!

“My first time defending it would be amazing if I could win tomorrow, but I’m not really focusing on that. I’m just trying to do what I’ve done the last few days, to stay relaxed and not get ahead of myself because it’s worked so far.”

When the English golfer won this tournament in 2019 she carried the bag by herself, but this time Dimmock has the added bonus of having her dad Chris alongside her.

She explained: “Dad has been keeping me calm. We’ve just been having a chat and it’s quite nice because he doesn’t really help me out. He’ll maybe pace to a yardage for me but it’s tough out here walking and I’m appreciative he’s been able to carry the bag.”

Sitting one stroke behind the leaders in third place and on four-under-par is Thailand’s Atthaya Thitikul, who made four birdies and two bogeys for her round of 69.

Slovenia’s Pia Babnik carded a round of 70 to be one shot adrift of Thitikul, while Scotland’s Kylie Henry is another shot further back on two-under-par.

India’s Tvesa Malik shot the best round of the day carding a 67 including five birdies and one bogey, she sits alongside Sweden’s Johanna Gustavsson in T10 on level par for the tournament.

French trio Anne-Lise Caudal, Lucie Malchirand and Camille Chevalier are among a group of players who are tied 12th. The cut fell at +9, with 73 players advancing to the final day.