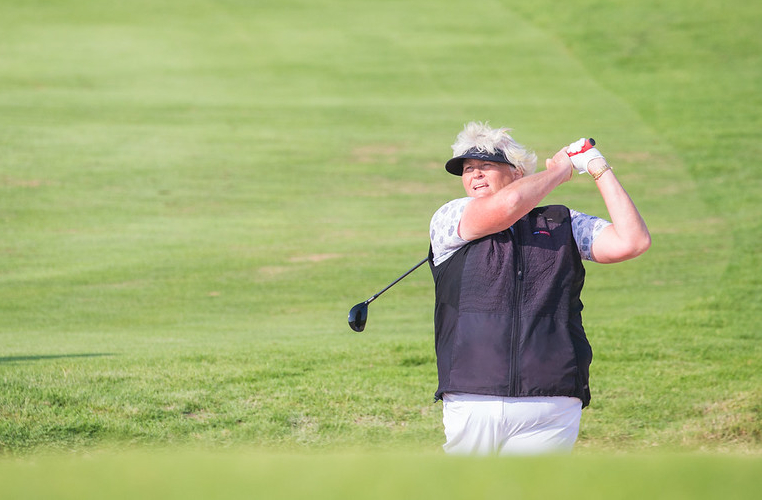 Dame Laura Davies is a legend of golf and this week is back in Belgium, where she secured her first Ladies European Tour (LET) win back in 1985, for the Mithra Belgian Ladies Open.

Davies is England’s most accomplished golfer with 87 tournament victories to her name including 45 Ladies European Tour (LET) titles and 20 LPGA titles, as well as playing in the Solheim Cup for Europe on 12 occasions.

But her first victory on Tour came in 1985 at Royal Waterloo Golf Club where Davies claimed a one-shot victory over compatriot Maxine Burton and that tournament holds memories that the English legend will forever hold close to her heart.

“I still have a poster at home from Royal Waterloo where I won in 1985,” said Davies.  “It was a big event, and the prize money was big.

“I remember I was a few shots behind Maxine Burton, so I wasn’t under that much pressure, and I had a really good finish and won it.

“They are memories that I still hold close to my heart to this day because if you don’t get the first win then you can’t get the second.”

That victory was the start of something special and gave Davies the confidence to push forward with her game.

At the end of that year, she became the first player to win the Rookie of the Year and Order of Merit – a feat that has since been replicated by Carlota Ciganda, Esther Henseleit and Atthaya Thitikul.

And Davies, who is a four-time Major winner, credits that victory for propelling her career in the right direction.

“I didn’t have a brilliant amateur career,” she continued. “And there were a lot better players than me coming through the amateur ranks at that stage, but I just took to it.

“I finished second in my second ever event and that gave me some confidence and then there was the win in Belgium about a month later.

“By the end of the next year I think I had won four more times and I was off and running then, this game is all about confidence.

“Everyone needs a break and that was mine, to get that win coming from behind and not have the pressure of the lead which is for your first win is the hardest thing. You need a bit of luck and to be in the right place at the right time.”

The LET returns to Belgium for the first time since 1995 this week as Naxhelet Golf Club hosts the 12th event of the 2022 season.

126 players will tee it up at the eco-responsible golf course, which is GEO certified, including Davies and the 45-time LET winner believes the scoring will be good.

She added: “It is a very fair course, there are some really tough holes. You have some chances, but it is very well bunkered and there is a bit of water out there to be wary of. The greens are immaculate, I think scoring might be good mainly because of the greens because it is a bit of a challenge.”