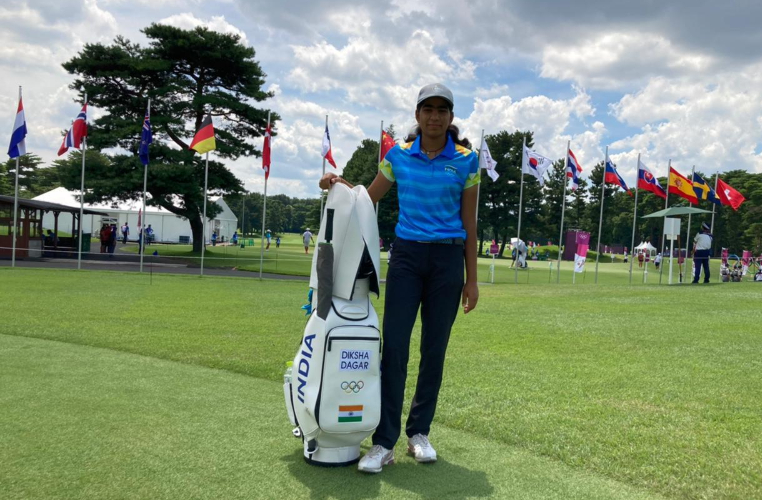 Diksha Dagar confesses to letting out a big huge scream when it was confirmed that she had indeed made the field for the Tokyo Olympics.

“I could not believe it, when my father (Col Naren Dagar) told me about the message he had received. I kept asking him, ‘Are you sure, are you sure?’ and he kept saying ‘yes’. It was one of the most thrilling moments of my life,” said Dagar, only the second Indian woman to play the Olympics after Aditi Ashok, who is also in Tokyo for her second Games.

Ironically, a year ago and till a few ago before the cut-off for the Top-60 Diksha seemed sure of making the mark for the Games. Then just  before the cut-off happened, she fell out of Top-60 and was a fifth reserve. With some players withdrawing and finally when South African Paula Reto withdrew after testing positive for Covid and Austria deciding not to send Sarah Schober, Diksha came into the field at the last minute. She got to know on Tuesday/ Wednesday and by Sunday might she had reached Tokyo. “I got a lot of help from everyone including Ladies European Tour,” said Dagar.

This year Diksha was in the winning team at Aramco Series London besides having Top-10 finishes at Czech Ladies and Gant Ladies Open. “She has run into good form of late,” said Col Dagar, her coach, father and caddie.

Diksha, who says that Aditi has been inspiration, is also the second Indian to have won on the Ladies European Tour. While Aditi won her maiden LET title in India at the Hero Indian Open in 2016, Diksha won her maiden title in 2019 in South Africa and the SA Women’s Open.

Diksha, who born with a hearing impairment, will also become the first Indian and one of few players around the world, who have won a medal at the Deaflympics (Olympics for the Deaf) in 2017 and then to represent her country at the Olympic Games. Diksha won a silver medal in golf at the Deaflympics.

“Ever since golf came to Olympics in 2016, it was my dream to get there and now I am here. It has been inspiring to see the world’s top stars in every sport here in Tokyo. I feel proud to be an Olympian,” added Diksha, who plays with Kim Metraux and Tonje Daffinrud.

Aditi will play her first round with Nanna Koerstz Madsen and Giulia Molinaro.

“I am loving the atmosphere of the Village. There are players moving around carrying heavy speakers on their shoulders and playing music. But we are also careful to maintain protocols,” she added.

She admitted that the last year and a half has been tough. “It has been challenging to stay motivated through the pandemic, but my father, family, sponsors like Hero, the Women’ Golf Association of India and the IGU kept me motivated,” she added.

Diksha also got a practice round with Lexi Thompson and she is looking forward to four days of great golf. “My goal is to do my best. This is my greatest chance and I want to do my best and play well. The course here is long and can be challenging, but it is the same for all.”

On the support she has had, she went on, “My father has been the driving force and it is great to have him with me (as a caddie) as I achieve my dream of playing at the Olympic Games.”