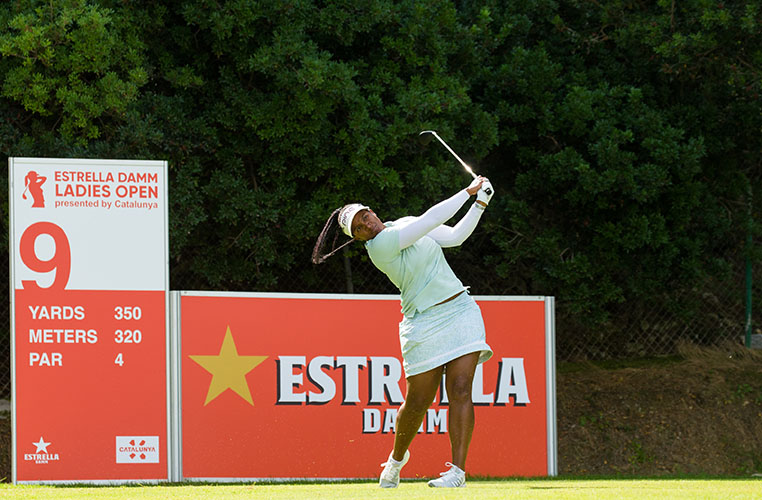 Dlamini, 29, set the early pace with three birdies in a row on the newly redesigned second, third and fourth holes. She sank a three-foot putt on the uphill eighth hole for another birdie and made the turn in four-under-par 33.

As the wind picked up, she made another two birdies, along with two bogeys on the back nine, coming home in level par 35.

“I had quite a solid round and hit the ball well. The putts rolled in today and I hit a couple more fairways than usual,” said Dlamini, whose career low round on the LET was a 67 in the Sberbank Golf Masters in Pilsen seven years ago.

“The wind got a bit tricky on the back nine because the direction of the wind changed and it was a bit confusing and difficult to judge which clubs to take, but I think I managed it well.

“I really love this golf course. There are some pretty holes and it suits my eye as well. I really like it. The new holes (from one to six) are good. They aren’t quite ready, but they are going to be very good. It’s such a pretty design. The first hole is a challenging hole. You’ve got to hit a good tee shot and if you are on, the putt is makeable. The second hole is a really nice one, with a nice green, so I think they have made some tremendous changes here; it’s really good.”

Dlamini has just enjoyed a week at home in Johannesburg, South Africa, where she spent time with her golf coach, Llewelyn Van Leewan, which she said offered a welcome rest from a demanding schedule.

MacDonald, 30, from Inverness, started later in the afternoon and mixed five birdies with a bogey.

She said: “I’m really happy. I played some good golf out there in good conditions, with a good group.

“It was just solid from tee to green. I had a bad swing on four and put it into the water on my approach, and you are looking to birdie that hole, so that was disappointing. Other than that I can’t say much. I played really well.”

MacDonald has been enjoying swimming in the Mediterranean sea to relax in between rounds and she added: “I’ve got good feels around here. Two years ago I finished in the top ten. It’s a beautiful place and I’ve been in the sea every day, pretty much, so I’m using the sea as rest and recovery, before and after my tee times. Perhaps it will help my golf. Let’s see.”

Belgium’s Manon De Roey and Magdalena Simmermacher from Argentina are tied for third on three-under-par 69. Eight further players sit on two-under-par, including the leading Spaniard Maria Hernandez and Australian Steph Kyriacou, who is ranked second on the Race to Costa del Sol.