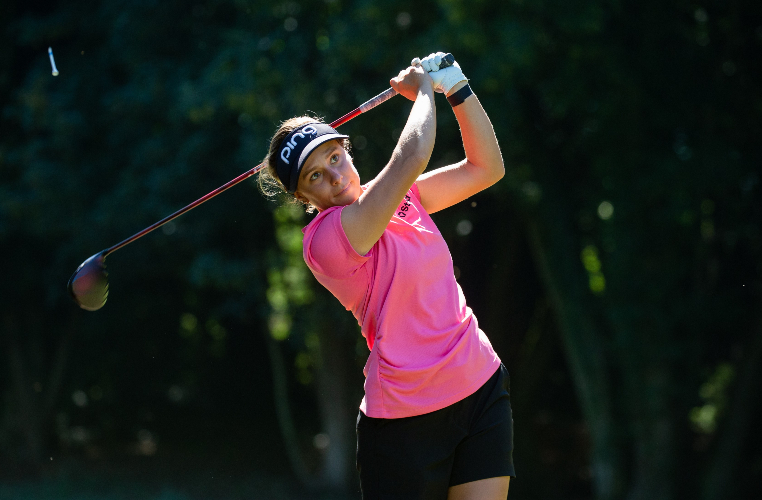 Amanda Doherty continued her impressive form at the ISPS Handa World Invitational presented by Aviv Clinics firing a round of 67 (-5) to lead by one shot at the midway mark.

After a first round of six-under at Galgorm Castle, the 24-year-old followed it up with a round of a round of five-under at Massereene.

Doherty began her round with back-to-back birdies on the second and third holes, and rolled in three more on six, seven and nine to make the turn in 31 (-5).

Despite a dropped shot on the 11th, the LPGA Tour rookie made another birdie on 13 to finish with a total of 11-under-par after 36 holes.

“Putts were going in today. I was hitting the ball well to get it close enough for them to go in, but they were just falling in,” she said.

“That was definitely the best part of my game on the front nine. I then tried to hang on on the back nine, but I was putting really well today.

“Leading is not a position I have really been in before on the LPGA, so it’s always fun. It’s nice to know that I have some good, low rounds in me for sure. The last two years on the Epson Tour was a really good learning experience for me, and I think to have put myself in contention so many times last year makes me feel a little bit more comfortable with the position that I’m in now.”

Denmark’s Emily Kristine Pedersen – winner of the 2020 Race to Costa del Sol – and American Lauren Coughlin sit one shot back on 10-under-par.

Solheim Cup star Pedersen got off to a blistering start with four birdies in her opening four holes, she made bogeys on eight and 11 but rolled in three more birdies for a second round of 68 (-5) at Galgorm.

“It was good,” said the five-time LET winner. “Five-under is good, and it’s nice to follow up one low round with another one. I think I’m going to keep going, trying to make birdies, try and cut out some of bogeys and see what the weekend brings.

“That’s a dream start. It kind of makes you want a bit more than five-under when you’re four-under through four. They were pretty easy birdies I would say. Apart from the third, I holed a long one there. It is still good to go the rest of it one-under-par and I’m hoping I can keep making birdies on the weekend.

“It’s been a while since I’ve been in contention, so it’s always nice to be up there. It’s nice to keep being up there after the first round, and then hopefully I’ll stay in contention the rest of the weekend as well.”

Coughlin also carded an excellent round of 68 (-5) at Galgorm which included two eagles, three birdies and two bogeys.

The 29-year-old has been enjoying the sights Northern Ireland has to offer while she is playing in the ISPS Handa World Invitational.

“It’s pretty big to be in this position. It’s definitely a confidence boost going into the weekend, but there are still two more rounds to be played. I’m trying hard to stay in the present each hole. I know it’s cliche, one shot at a time. I think I didn’t do a great job of that at the AIG Women’s Open last week.

“Last night, we went out, my caddie and his mom, and went up to the Giant’s Causeway and had dinner in Portrush. It was beautiful up there; I’m really enjoying being here in Northern Ireland.”

England’s Cara Gainer sits in outright fourth place after the opening two days of competition on nine-under-par, having produced a round of 67 (-5) at Massereene.

“It was a great funky, quirky course,” said Gainer, who finished second at the 2022 Mithra Belgian Ladies Open. “I was really looking forward to playing it.

“It was definitely a lot firmer than in the practice rounds, so I felt like I was playing a bit of a new course today. I was playing a lot to the front number and letting it roll out, a bit kind of links style. I’ve really enjoyed it.

“I was a bit gutted because I bogeyed eight, I was in the bunker on the right and just didn’t hit a great bunker shot. I was five-under before that, so I really wanted to birdie the last to get back to five. It was a nice putt on the last, so it was a great feeling.

“I’ve been seeing my game really trend in the right direction. I know I can shoot a low number, so it’s just really about staying patient and trusting that I’m good enough to be out here with all these top players.”

Three players are in a share of fifth place with England’s Georgia Hall, who produced a hole-in-one on day two as did Finland’s Tiia Koivisto.

Hall sits alongside Ireland’s Leona Maguire and Chinese Taipei’s Peiyun Chien on eight-under-par, while American Allisen Corpuz is alone in eighth place one shot further back.

Five players are in a tie for ninth on six-under-par including 2022 Race to Costa del Sol number one and two Maja Stark and Linn Grant. The cut fell at +1 with 62 players making it through to Saturday.

In the men’s competition, Scotland’s Ewen Ferguson leads by one shot on nine-under having produced a round of even par at Massereene with 64 men making the cut.