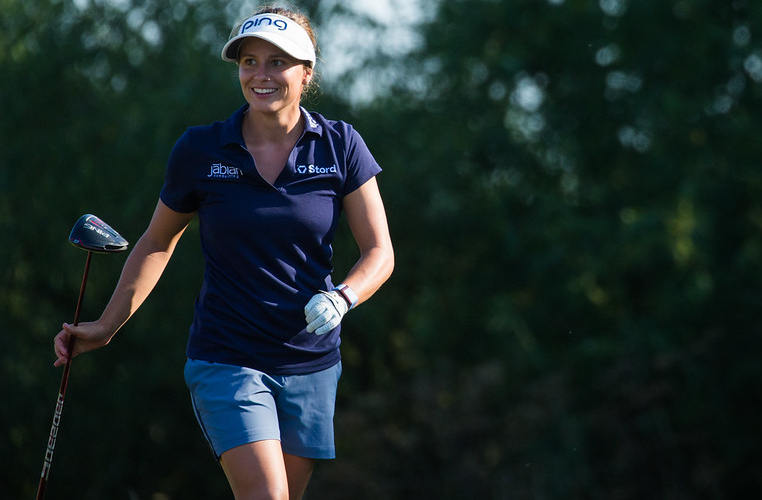 Amanda Doherty carded a third round of 72 (-1) to maintain a one-shot lead at the ISPS Handa World Invitational presented by Aviv Clinics.

The LPGA Tour rookie got off to a slower start at Galgorm with a bogey on the third followed by a birdie on the fourth, before a double bogey on the fifth.

However, the 24-year-old soon got into her groove rolling in three birdies around the turn on holes eight, 10 and 12.

Although Doherty dropped another shot on 14, a birdie on the last meant the American reached 12-under-par to keep her one-shot lead with one round remaining.

“I feel like overall it was a good day. I got off to a little bit of a rough start and I hit a few crazy shots today, so I managed to kind of come back from those and try and stay patient to have a decent round,” said Doherty.

“Going into the second round and going into today I was in pretty much the same spot, so I feel like I’ve had a little bit of experience with that this week. Obviously, the final round is a little bit different, but I’m excited.

“I was glad to get a birdie on 18. I had a few close calls, and nothing was going in, so it was nice to get that one. I was in contention quite a few times last year on the Epson Tour. I didn’t pull any of them off, but I feel like I had good final rounds. That’s all you can ask for. You can’t control what anybody else does. As long as I can have a solid final round, I’ll be happy with that.”

England’s Georgia Hall and Chinese Taipei’s Peiyun Chien sit one shot behind the leader on 11-under-par after 54 holes.

It was a solid round for Major-winner Hall, who shot 70 (-3) with three bogeys, four birdies and a tap-in eagle on her scorecard.

“I’m a little bit disappointed of my round, to be honest,” said Hall. “I had a really steady front nine, I was very happy with that and then back nine was really slow for me.

“I didn’t really get anything going. I missed couple putts, but it was great birdie on the last and it gives me a chance for tomorrow. I think I should have played a little bit better than that. I just need to do some practice now and get ready for tomorrow.

“It’s where I want to be on the leaderboard. I want to keep putting myself in pressure situations like this, in contention. The more I can I think I’m bound to come out on top here or there.”

While Chien got off to a hot start with three birdies in her first four holes and she rolled in another on nine to make the turn in four-under.

Even though the back nine was trickier, with the 31-year-old making a bogey on 12 and a double bogey on 14, she recovered with birdies on 15 and 18 to reach 11-under-par.

“The course is very firm this afternoon,” she said. “I played with Georgia, so I learn a lot from her. She’s pretty consistent.

“I have a lot of experience to calm down a lot of times. I learned in the back nine before, like ten minutes of just breathing with stomach, and just try to be calm and not very hyper on every single shot. That’s what I have learned.

“The birdie on the last really helped my confidence. Tomorrow I will start again on the first hole, so I will try to play hard every shot and hit to the flag.”

Three players are in a share of fourth place on 10-under-par including 2022 Race to Costa del Sol leader Maja Stark, who fired a round of 69 (-4).

After a birdie on the first, the four-time LET winner made a double bogey in the fifth but soon made up for it with birdies on seven and eight followed by an eagle on nine and a further birdie on 11.

“It was a bit frustrating. I had a lot of putts that just didn’t go in,” said the world number 67. “I have been struggling with my confidence on the greens this past week, but I finally managed to get my irons in check and actually stuck some pretty close. Overall, I’m pretty happy with how I fought back.

“After the double bogey, I think the plan was just to get back to it. I just want to beat Linn [Grant], but we also had a competition that we wanted to make 16 birdies together. I think it was just all about sticking to that goal, too, and having someone there to push for you.

“We said before the round, let’s really root for each other today, more than usual, and do high fives when we make birdies and stuff. We did that, and it was really nice to just have someone push you.

“I had a couple times this round where I got a little bit shaky and got a little bit nervous and my heart rate was racing because I thought about what it would mean to win. It will probably be a problem tomorrow. It will be something that’s unusual, but I know how to handle it.”

Stark is joined by American Allisen Corpuz as well as Denmark’s Emily Kristine Pedersen, who won the 2020 Race to Costa del Sol, and shot a round of level par on day three.

Pedersen said: “It was a bit of a challenge really. I hit it really bad off the tee. I started off on the first with a ball out of bounds and then one in the water on nine. I just tried to really work my butt off to not play myself out of it. It wasn’t a good day. I’m really happy that I didn’t just throw it all away and I still have the chance tomorrow.”

Sweden’s Linn Grant is in seventh place on nine-under-par, while England’s Liz Young fired the joint-best round of the day – a six-under 67 – to be in T8 with South Africa’s Lee-Anne Pace.

Five players are in a tie for 10th place on seven-under-par including Scotland’s Gemma Dryburgh and English pair Alice Hewson and Cara Gainer.

At the end of day three, the cut fell at -1 with 39 players making it through to the final day of action at the ISPS Handa World Invitational.

In the men’s tournament, Scotland’s Ewen Ferguson leads with a score of 11-under-par and is three shots clear of American John Catlin with 38 players making it to the final day.