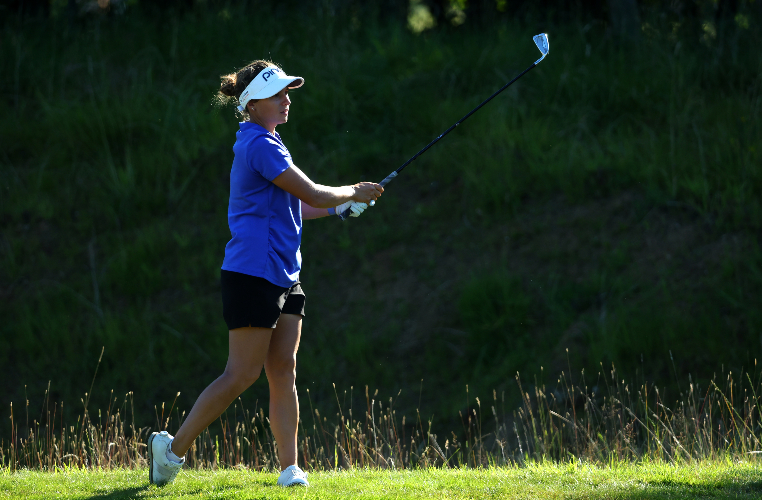 American Amanda Doherty equalled her career-best round on the LPGA Tour of 67 (-6) to lead by one stroke at the end of the first day of the ISPS Handa World Invitational presented by Aviv Clinics.

The 24-year-old, who began her round at Galgorm on the 10th tee, started with a birdie on her first hole before adding two more on 13 and 18 to make the turn in three-under.

Doherty rolled in four more birdies on her back nine with her only dropped shot coming at the fourth for a round of six-under-par.

“I was really just trying to stay in the moment today, and I feel like I was just kind of in that mindset starting the day,” said the LPGA Tour rookie.

“I stayed patient. I know it’s kind of cliche, but it works. I was hitting the ball well. I made a couple good putts and there were some reachable par-fives, so it just kind of came together.

“I thought it was awesome out there. This is like perfect weather for me, and the course is in great shape. You don’t often get to play two courses, so it’s definitely interesting. A totally new game plan tomorrow. I’m just trying to stick to the same thing and stay patient and hopefully have a good round.”

Four players sit in a tie for second place at the end of the first round with America’s Lauren Coughlin and Denmark’s Emily Kristine Pedersen firing rounds of 67 (-5) at Massereene.

While Ireland’s Leona Maguire and England’s Georgia Hall both carded rounds of 68 (-5) at Galgorm for the quartet to be on five-under-par.

It was an up and down round for Maguire after she began with a bogey at the first, but she fought back with an eagle and back-to-back birdies on holes three through to five.

Despite further dropped shots on the sixth, eighth and 12th, the Solheim Cup star rolled in five birdies in her last 10 holes including three consecutively on 16, 17 and 18 for her round of 68.

“It is never ideal when you hit your first tee shot out of bounds,” said Maguire. “I didn’t hit the ball particularly well today well off the tee. There were a few dropped shots, but I putted really nice to keep myself in there. It’s always nice to finish with three birdies in the end.

“I didn’t hit enough fairways and I didn’t really feel comfortable over a lot of the tee shots. This course doesn’t suit my eye very well, so it’s nice to have a change of scenery. I’ll get out on the range, and we’ll go again going in early tomorrow.

“Any time you shoot bogey-free in a major it’s always a confidence boost. If I had the putted today like I putted on Sunday, it would be a bit of a different story. If I can take the ball striking from last week and add it to the putting today, I would be very happy.”

For Major-winner Hall, it was a solid round as she only had one dropped shot and rolled in four birdies and one eagle on her way to a 68 (-5).

“It was pretty easy, to be honest,” said Hall. “The pins were in good spots and the weather was really good, so I managed to take advantage of some holes and play okay today.

“I was putting was pretty good I would say. I have a couple of little things to work on. I felt I could have got quite a bit more under par than that. I felt I played fairly average because there are a lot of chances out there today. Lots of golf left to be played, but obviously a solid start and hopefully carry that into tomorrow.”

2020 Race to Costa del Sol winner Pedersen produced a round with one eagle, five birdies and two bogeys for her 67 (-5) at Massereene.

Pedersen explained: “It was a good start. I managed to hole a few putts and play decent and stay in the middle. It’s quite a change from how we played at Dundonald and Muirfield. I had to get used to being more target golf, more straight off the tee; couldn’t just miss it to one side. I’m happy with today.”

It was a similar story for Coughlin, who made one bogey, four birdies and an eagle on the same course for her first round.

Coughlin said: “It’s a fun golf course. You really have to hope you guess how the bounces are going to go on the greens. Sometimes they do; sometimes they don’t. It was fun, a really good start. I’m really excited to be back in Northern Ireland.

“I’m Irish, so I think that helps a little bit. I think it’s just more the courses kind of suit me. You have to really control your golf ball, and I did a pretty good job of that today. I finally made some putts.”

Seven players are in a share of sixth place after the first day with English duo Rosie Davies and Cara Gainer, 11-time LET winner Lee-Anne Pace, Austria’s Christine Wolf, Belgium’s Manon De Roey – who is fourth in the 2022 Race to Costa del Sol – and American pair Kaitlyn Papp and Janie Jackson on four-under-par.

In the men’s competition, Scotland’s Ewen Ferguson fired an excellent round of 61 (-9) at Galgorm to lead the tournament by four shots.

For round two, players will tee it up on the opposite course to today with a cut being made to the top-60 and ties at the end of the second day.