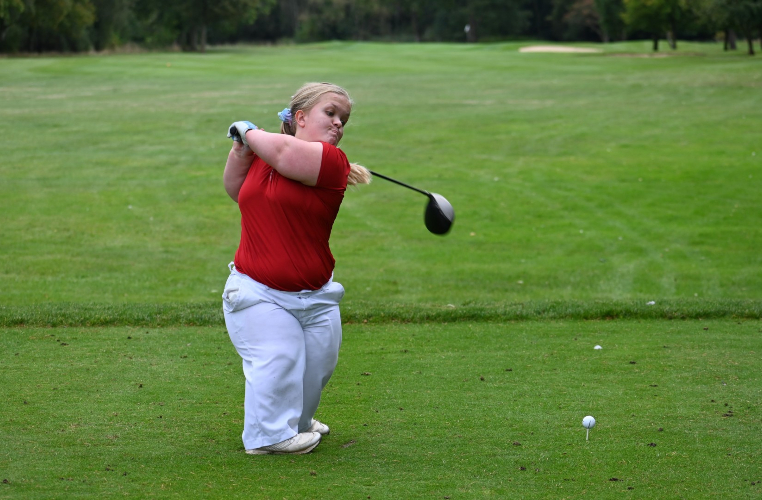 “It makes me feel motivated and want to do it more when I know that I’ve done something good for some children and adults.”

Ellie Perks, one of EDGA’s growing group of Generation Z golfers, defies many of the character traits commonly associated with those born between 1995 and 2009. Sometimes called digital natives, the efficiency of how they surf, text, and interact with the online world is quite remarkable. Yet, Ellie spends hours upon hours helping others to find a game that has all too often been associated with much older participants and has been played for more than 300 years.

Ellie, who hails from Hagley in the West Midlands of England, is very much her own person, has a clear sense of mission and feeds off the social interaction she enjoys while helping others to savour the fresh air and open spaces found when playing the game she so dearly loves.

Dad, Martin was the catalyst that started Ellie’s journey into golf. “Well, first of all, I went to the golf club just to be with my Dad. The head professional, Gareth Snelgrove, came over to us and said that they had a charity called ‘Golf for Disabled Children,’ and would I like to give golf a try?” With these words, Ellie’s world would be forever changed. In a matter of days, Ellie was taking advantage of the free golf lessons offered by the charity under the guidance of Gareth. That was eight, almost nine years ago and so Ellie has played the game for half of her life, and what a difference it has made. “Golf is a huge thing in my life. Obviously, without the help from [young people’s charity] the Golf Foundation, and many others including Dad and Sharon Renhard, a former lady captain of the golf club, I would never be able to do the kinds of things that I do.”

Ellie is a person of short stature, and although golf has been supportive, the wider community has not always been quite so understanding. “I think with my generation at school, some try to put me down because I play a lot of golf and they don’t want me to be performing at a high standard and getting the recognition that I do.” Although Ellie is made of strong stuff, and even though she tries to ignore the bullying, she has to find ways to cope. “It’s easy to feel upset, to feel hurt, but that is just going to encourage them to do it even more. I just try to live my normal day, get my day done at school and then go home and play golf, that’s how I deal with it.” The golf course has become a sanctuary where Ellie can simply be herself, a place where she is accepted for who she is.

As much as Ellie is working to become the best player she can become, she also wants to help others find the game. When not found at school, or on the range working on her game, she can be found using those digital skills in promoting, ‘Golf for Disabled Children, ”Little People UK,’ and ‘Dwarf Sports,’ The Golf for Disabled Children lessons, held at her home club, provide a great opportunity for Ellie to assist newcomers in taking their first few swings. With the guidance of her professional Gareth, Ellie can use her personal experience of going through the programme to great effect. “Obviously when I was younger, I didn’t really know much about golf, but I think with Golf for Disabled Children it allows you to be able to take it slowly. To be able to just hit balls and learn as you go is quite nice because you don’t feel pressured or rushed, you can take your time.”

Dwarf Sports is another of the charities she has helped out with by conducting a golf taster session. “I wanted to be able to get other people with dwarfism involved as there are not many people who have dwarfism and play golf. I didn’t think I’d have many people turn-up to the session, but in the end, I had about 30 people. It was quite exciting to see that people were actually coming to give golf a try, and so I’ve been doing them every month ever since.” The reward for Ellie is not financial, it just makes her feel good to know that she is opening the door of opportunity to allow other people of short stature to give golf a try. “It makes me feel motivated and want to do it more when I know that I’ve done something good for some children and adults.”

Ellie enjoys giving back to the people who have helped her, to help others find the game, to inspire a new generation of golfers with a disability to pick up a club and hit that small ball to a near or distant hole. Rightly she has already received recognition for her contribution. In 2019, the then 14-year-old Ellie became the first girl to be presented with England Golf’s Hero’s Handshake, which celebrates what young people are achieving in golf outside of just the competitions.

All too often, people of all generations are labelled. The baby boomers, millennials and now the Generation Z’s, and yet it is always dangerous to put people into little boxes neatly organised with generalised character traits. This allows our lazy minds to extrapolate, to build a picture of someone based on the labels they unwittingly have had attached. Research findings suggest that Gen Z’s are less hedonistic than those who have recently gone before, more aware of social issues and invested in diversity and inclusion. Ellie is her own person, she has her own unique traits, one of which is an enthusiasm for the game that she so passionately loves and which is an extension of her ever-developing personality.