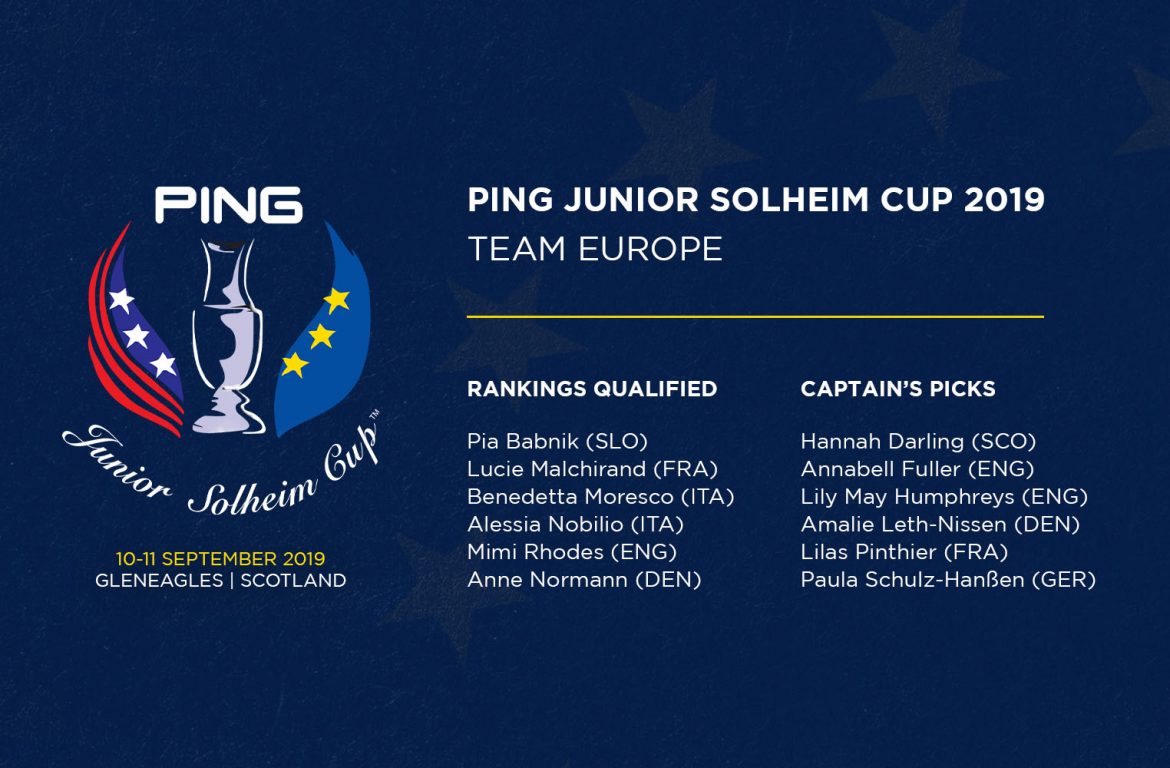 The 12 European players to take on the USA in the 2019 PING Junior Solheim Cup at Gleneagles have been confirmed following the conclusion of the 10thand final qualifying event.

Six players qualified automatically from the European rankings at the end of the R&A Girls’ Amateur Championship at Panmure Golf Club in Scotland, which concluded a campaign featuring events in the UK, France, Germany, Italy, Portugal, Spain and Sweden.

Another six were selected by Captain Mickey Walker, including Scotland’s own Hannah Darling.

Walker, who was the first European Solheim Cup Captain back in the inaugural edition in 1990, said: “I am excited to announce such a young, talented and truly international European Team for this year’s PING Junior Solheim Cup. This will be a special week for everyone involved and create memories and friendships that will last a lifetime.

“I am delighted that the matches will be played at Gleneagles – one of the most iconic golfing venues in the UK and one of my personal favourite places to visit and play golf. I feel sure that all of the girls participating in the PJSC will also feel the same.

“I am very much looking forward to renewing my friendship with Mary Bea Porter King – a friend from our playing days on the LPGA Tour – and meeting her talented US Team.

“Finally, on behalf of the European Team I would like to say a big thank you to John Solheim and his family for their vision and generosity in creating this wonderful match between the very best young players from two continents.”

The PING Junior Solheim Cup began in 2002 thanks to the Solheim family’s vision to give female golfers aged 12 to 18 a taste of the biennial competition and the chance to compete on a big stage.

John Solheim, PING Chairman and CEO, said: “The depth of talent on Mickey Walker’s team is very impressive and promises to create some exciting and memorable moments at Gleneagles.

“It’s wonderful to see six countries represented. It speaks to the wide appeal of the game and is a testament to the golf organisations within each country that have committed to developing such talented young ladies.

“Their experience will be unforgettable as they represent Europe in its quest to win the PING Junior Solheim Cup under Mickey’s leadership. It will be a passion-filled, hard-fought competition kicking off a tremendous week of golf. We wish them all the best.”

Sixteen-year-old Edinburgh resident Darling was part of Project 19, a group of young female golfers who set up a WhatsApp group in late 2015 shortly after Gleneagles was announced as the 2019 venue to inspire each other to make the junior team.

Their story has caught the eye of many, including Visit Scotland and Scottish Golf, and in 2017 they all went to The Solheim Cup at Des Moines Golf & Country Club to experience the event in the flesh.

The USA currently hold the PING Junior Solheim Cup trophy after their 14.5 – 9.5 victory two years ago, one of seven victories in the competition since it began in 2002. Europe’s two victories came in 2003 and 2007, both of which were played in Sweden.

Team USA confirmed their team on 31stJuly – CLICK HERE to see their line-up.