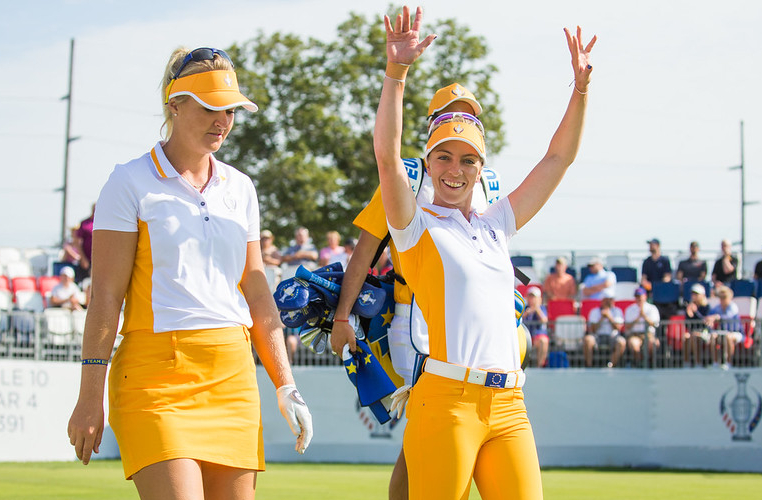 Winning Majors and being part of the Solheim Cup is something most players dream of achieving in their career and Germany’s Sophia Popov will live out that dream this week.

Pulling on Team Europe’s colours will cap a meteoric rise for Popov, who won the 2020 AIG Women’s Open at Royal Troon.

The German star represented Team Europe at the 2009 PING Junior Solheim Cup and is relishing making her Solheim Cup debut.

“For me it’s just an absolute dream come true. I think I always wanted to be a part of this team, and when I was commentating in 2015 or any of the other years, it was always one of those things that I missed out on,” said Popov.

“Winning a Major is every female golfer’s dream and I think the British Open was very special fo me coming from Europe. I think those are my two biggest goals and now being able to achieve the second one means a lot to me.”

The Major winner is one of four rookies who will make their debut at the Solheim Cup, after she qualified automatically through the Rolex Women’s World Golf Rankings.

Captain Catriona Matthew picked three more debutants and two of them will tee it up in the Saturday morning foursomes.

Maguire and Castren have made history this week by becoming the first golfers to represent their country and play for Team Europe in the prestigious competition.

“It has been amazing. This is something I’ve looked forward to for a long time. Got a little glimpse of it when I played the Junior Solheims, and it is really good to be part of the big team now. I think there will be a lot of good memories after this week, and hopefully some of them will be on the golf course, but I think a lot of them will be off the golf course, too,” said Maguire.

Castren explained: “I love playing for Europe. I love representing European and wearing the colours. And most of the girls here I knew from before and the ones I didn’t, I’ve become friends with and everyone’s super nice to me and very welcoming. The more seasoned players are giving me advice and they’re there for me to help me with anything I need.”

Denmark’s Nanna Koerstz Madsen is the fourth rookie on the team, and she is making history alongside Emily Kristine Pedersen, as it is the first time two Danish players have made the team.

Madsen added: “I’m most looking forward to the first tee and seeing how the crowd is going to be. It was really cool with the music and some people there. So that’s what I’m looking most forward to. I know it’s going to be exciting to play out there. I’m probably going to be a little nervous, which everyone else is going to be, so I just hope I can cope with those emotions, which I’m sure I will.”