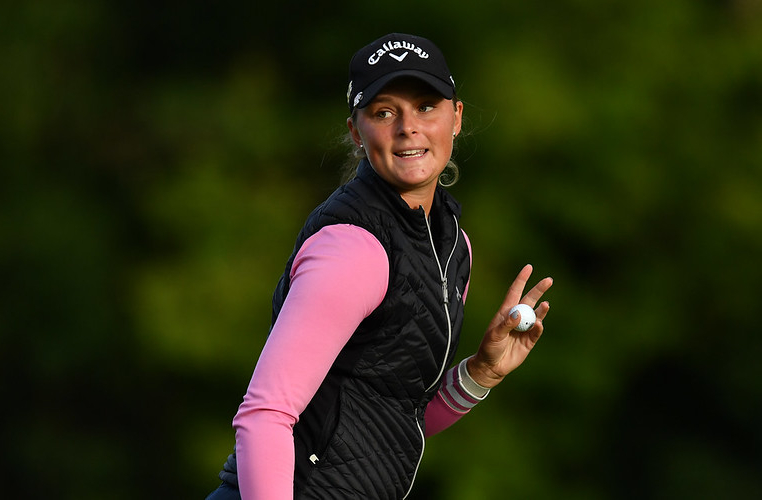 Sweden’s Moa Folke fired an exceptional round of 62 (-10) and leads by two strokes at the halfway stage of the KPMG Women’s Irish Open.

The second round was dubbed ‘Pink Friday’ in support of the National Breast Cancer Research Institute, a charity partner of the KPMG Women’s Irish Open, and everyone was encouraged to wear pink clothing with pink ribbons also provided.

It was a sensational day for the 27-year-old Swede who started with a birdie on the first and then added another on the third before three in-a-row on holes six through eight to make the turn in 30 (-5).

A dropped shot on the 11th was no bother for Folke as she then rolled in four birdies consecutively on holes 13 through 16 before finishing her day with an eagle on 18.

“I don’t know what happened really! All the putts seemed to go in today,” she said. “I hit some really good shots and I’m just really happy. I don’t know if I can really understand what happened.

“Everything came together, I made some mistakes but ended up in good spots and then I made a lot of putts. I think it’s a course that sets ups for aggressive play and usually it pays off to be aggressive. I had that one bogey where I went for the green and I ended up dropping that shot, but it still worked out.

“Every time you’re ahead of Linn [Grant], I think it’s been a good day. I think it’s fun to see that almost every week there’s a Swede at the top even after yesterday’s round. We all know each other and we’re all happy when somebody else succeeds.

“The season is coming to an end and myself as with other players need a good tournament. Making the cut was the first goal, so I didn’t need to worry on 18 today and that was quite nice. Today I got away with my mistakes and I had some luck out there. Tomorrow is a new day and I’m going to keep going and following the plan and we’ll see what it ends up with.”

After opening with a round of 69 (-3) both Soenderby and Alonso produced rounds of 65 (-7) on day two at Dromoland Castle.

“It’s definitely my best round score-wise as a professional, but actually not my best round ball-striking wise,” said the Danish LET rookie, who made eight birdies today. “My putter was cooperating today which helped.

“The greens are around 11 on the stimpmeter and they’re so even. Even this morning, it was very dark when I got here to warm up on the putting green with the lights on, but it was still so even.

“I have been close for quite a while; I’ve had a good stretch for the last four tournaments. I knew a low score was coming if my putter was doing good and today, I was putting with confidence and holing some putts.

“I want to keep doing what I’m doing, trusting my systems, and staying present and having fun. I really want a top-10, I haven’t had a top-10 yet this season and that’s definitely my goal for this week.”

While Alonso had a similar day in the morning with only one bogey on her scorecard alongside six birdies and an eagle.

“She is always doing a great job and today was a little bit tough because it rained sometimes but we’re in September in Ireland and I’m happy to be here.

“I really like the course. I can reach the par-fives. I am hitting long, and the putting is doing well so let’s see what will happen over the next two days. I have to do the same as I’m doing every day which is focusing on my routines, trying to do my best and that’s it.”

After beginning the week with a round of 66, Spilkova followed up with a 68 (-4) on day two with five birdies and one bogey on her card.

The LET winner said: “The weather was a little bit different than yesterday; it was a bit breezier, and we had a couple of showers and then I was hot and then cold. It was an interesting day where the front nine was pretty stable and the back nine was a little bit more up and down.

Another player who carded a round of 66 on day two was Denmark’s Nicole Broch Estrup, who is in a tie for seventh place on eight-under-par alongside Austria’s Christine Wolf.

Four players round out the top with England’s Felicity Johnson, Swedish duo Lina Boqvist and Elin Arvidsson and Austria’s Sarah Schober all one shot further back.

The cut fell at one-under-par with 63 players making it through to the weekend at the KPMG Women’s Irish Open.