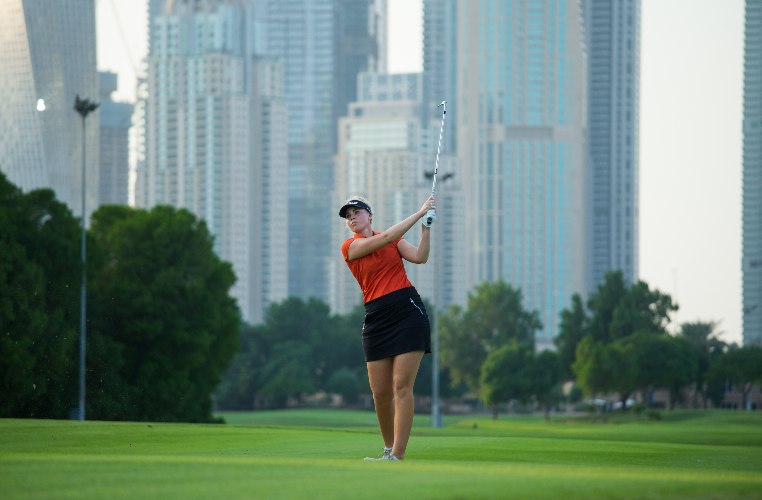 On a tightly contested second day of the Dubai Moonlight Classic presented by EGA, Maria Fassi and Jessica Karlsson sit tied at the top of the leaderboard on 10-under-par.

Fassi held the overnight lead after equalling the tournament course record of 63 in round one and although today was tougher, the 23-year-old held onto her position.

The Tokyo 2020 Olympian rolled in one birdie on the front nine, before making two birdies and two bogeys on the back nine for a round of 71 (-1).

“It was a bit of a struggle out there today, I couldn’t get anything going and had to save pars every three or four holes, so it was hard to build on the momentum that I had yesterday,” said the University of Arkansas product.

“I went out with a target on my back today and I still have it at the end of the day so that’s good, and hopefully some more putts drop tomorrow.

“I hit it splendid yesterday and it was average today, and I couldn’t get the few opportunities I had for birdie to go in, so if I clean up with the irons and get a couple more putts to drop, I’ll be in good shape tomorrow.”

The Mexican golfer has come into the Dubai Moonlight Classic on the back of a fifth place finish at the ShopRite LPGA Classic presented by Acer and has had her mum following her out on the course.

She added: “She knows how hard I work so she’s probably proud and happy that I’m playing good and I’m getting the results that I’m working so hard for.”

Tied at the top alongside Fassi is Sweden’s Jessica Karlsson who backed up a first round of 66 (-6) with a second round of 68 (-4).

The 29-year-old began her round on the 18th hole and started with back-to-back birdies before adding another on the third.

A dropped shot on the fifth didn’t deter the Swede who rolled in two further birdies on 10 and 16 to put herself into a share of the lead.

“I played good. I played some solid golf today and holed some great putts – what can I say, I played solidly. I didn’t know I was tied for the lead! The photographer told me when I was walking in from the last hole. That’s good news,” she said.

Karlsson took some time off the golf course during 2020 when she taught maths and science in a school. Coming back to professional tournament golf this year was an adjustment but one the Swede has taken in her stride with T10 finishes in France and Spain in the last six weeks.

“It was a little bit tough at the start of the year. I played some really bad golf because it had been one-and-a-half years since I had played tournament golf. I was a maths and science teacher last autumn, which was really good,” explained Karlsson, who is 62nd in the 2021 Race to Costa del Sol.

“It was hard to readjust. I have had a lot of time with my mental coach, and he has really helped me with that part of my game and my readjustment.”

South African Lee-Anne Pace, who was one shot off the lead overnight, sits in that position again after a round of 71 (1).

The ten-time LET winner had five birdies and four bogeys on her card but the bogey on 16th was an excellent save after ending up in the bush.

“It was entertaining, up and down, and pretty much all over the show. I started a bit cold with the putter but then it got hot in the middle, then I hit it in the bush and nearly hit my head, so it was a bit all over the place, but one-under at the end of the day means I still have a chance,” said Pace.

“My caddie really helped me out there because I wanted to play it into the bunker which could easily have been a seven, and he pointed in the other direction and we made an up and down, so that was a great call.

“I’m going to play the same game and try to get into the lead, and if not try to chase the lead.”

Two players are tied for fourth and two shots off the lead on eight-under-par including ISPS Handa World Invitational winner Pajaree Anannarukarn, as well as Olivia Cowan.

Finland’s Ursula Wikstrom and Germany’s Esther Henseleit both fired the round of the day – a 66 (-6) to move into T6 and T12, respectively.