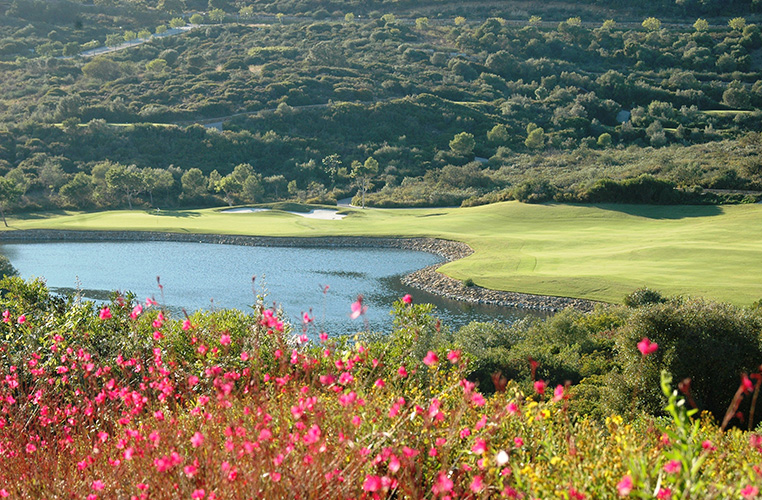 Finca Cortesin, the course that will host the next Solheim Cup from 22-24 September 2023, has unveiled a brand-new first hole: a drivable par four where players will face the challenge of reaching the green with their tee shot while a bustling grandstand full of spectators creates a unique atmosphere. The show is on!

The ambience on the first hole of the Solheim Cup is unlike any other golf tournament. The atmosphere and the decibels created by the European and American fans with their chants, music and colours mean that at that moment, the spectacle is turned from the golfers to the stands.

For this reason, the three parties involved in the organisation of the event: the Ladies European Tour, Deporte & Business and Finca Cortesin, agreed that the first hole of the 2023 Solheim Cup should be a place where a large number of people could gather and at the same time be a challenge for the golfers.

That place existed, but it was not on the original first hole of the golf course, it was on hole 4, so the team at Finca Cortesin, with Vicente Rubio, its Managing Director, went to work to make the necessary changes.

As a result, the new first hole at Finca Cortesin is now a 256-metre par 4, with a large lake on the left side that reaches the front of the green, a narrow, well-protected fairway and a large but lively green.

“It is a good decision to have made this change. The characteristics of the new hole one will allow us to accommodate more than 1000 people over the tee, which will make for a great atmosphere. I think it’s the perfect hole to start a Solheim Cup,” said Vicente Rubio.

“This hole is, as they say, a risk and reward hole. Players can either try to reach the green with one shot or play more conservatively. The design of the hole and the great difference in height between the tee and the green will make it a spectacle, and I have no doubt that it will be a success,” he concluded.

Players already experiencing this hole include Suzann Pettersen, the European captain, who with nine appearances in the Solheim Cup, knows extremely well what it feels like when a player prepares to take that first shot.

“The sensations you experience have nothing to do with other moments you can experience in golf, like leading a major, because in this tournament you don’t just play for yourself, you do it for your teammates, for your team…. you put all your heart into it and you want to give your best. That first tee of the Solheim Cup is all adrenaline and energy,” said Pettersen.

Stacy Lewis, the American captain, has also had the opportunity to check the characteristics of the new first hole at Finca Cortesin and did not hesitate to praise the choice: “I don’t think we’ve ever had a first hole like this in the Solheim Cup. You can reach the green but the water comes into play quite a lot”.

Lewis also highlighted the shape of the tee of this hole, as “It’s like an amphitheatre, the stands are going to be high up, practically above you, which will make the public feel very close. It’s definitely a great hole for the Solheim Cup,” he concluded.