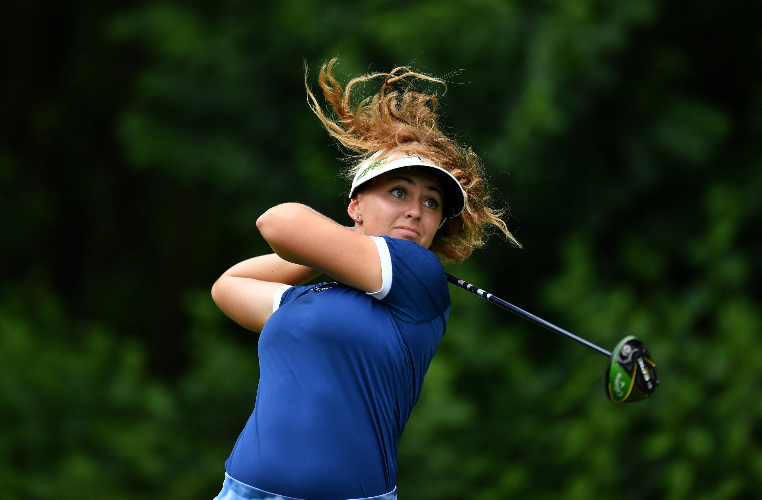 Germany’s Sandra Gal and Switzerland’s Kim Metraux produced sensational second rounds to be tied at the top on day two of the VP Bank Swiss Ladies Open, as play was suspended late on.

The threat of lightning meant that there are still groups are yet to complete their second round and play will restart at 07.40 local time on Saturday.

It was a career-best round for the German, who began the day on five-under-par, and fired a 63 to propel her to the top of the leaderboard.

The two-time Solheim Cup player rolled in a birdie on the second, before adding three consecutively on holes six through to eight to make the turn in 31.

Gal made another five birdies on her back nine to post the best round of her career and set the clubhouse lead on 14-under-par.

“I felt like I was in the zone all day long and it just flew by, I have to think about what happened out there. It was the lowest round I ever shot, so I’m happy I made the birdie on 17 and I just missed the one on 18,” said the 2011 Kia Classic winner.

“I’m super excited, and a bit surprised after such a long break, but I worked really hard, and I suppose at some point whatever you worked on hopefully will show.”

Back in August 2019, Gal took her first medical leave in an attempt to regain strength and stamina after being diagnosed with Lyme disease the previous year and she then played five events in 2020 on the LPGA Tour.

After extending her medical break in April, she returned to the LET in June at the Tipsport Czech Ladies Open and admits she wasn’t ready then but is pleased with her work so far this week.

“I took a medical exemption mid-2019 and started playing last year and this year I stopped again. It was more of a physical health issue the last couple of years and this year honestly, I needed a mental health break,” explained Gal.

“It is hard to explain, I just wasn’t ready after playing in Czech Republic and I worked really hard on my mindset and my own mental wellbeing. Playing really well the past two days and having my mum on the bag here just means a lot.”

Home favourite Metraux produced another stellar round to please the local crowd on day two as she shot a 64 to share the lead with Gal.

The Swiss star rolled in five birdies on the front nine including a monster putt on the par-3 eighth to make the turn in 30, before adding three more on the back nine to join the German on 14-under.

“It was good. I finally hit the fairway on one and two, so that was good compared to yesterday. I got off to a good start again, hit a lot of greens, made some putts and didn’t really think about anything else than hitting good shots and that was very helpful today,” said Metraux.

“I pulled my tee shot on the par-3 a bit and ended up being all the way on the right side of the green. I thought give it good speed and save the par and make sure everything is good and it ended up going in, so I was happy about that one.”

With a crowd following her throughout the second day, Metraux believes she thrived off having people around but is still not putting pressure on herself for the final day.

She added: “It is really nice to have people watching, I really enjoy that, and it gives me a lot of energy. I’m trying not to focus on the scores and just take it one shot at a time hitting and see where that takes me tomorrow.”

Three strokes adrift of Gal and Metraux are day one co-leaders Chloe Williams and Marianne Skarpnord, who both shot rounds of 69 on day two.

Wales’ Williams made five birdies and two bogeys, while five-time LET winner Skarpnord recovered from a double bogey on three and rolled in five birdies.

The Welshwoman said: “Another solid day. I started out really fast yesterday and holed a lot of putts, I think through the first nine holes I gave myself so many chances and I left myself on the wrong side of the hole. I had a lot of big break in putts, so I didn’t hole that many. Back nine again, many chances and I converted a few more. I dropped a couple of shots but a couple of bad swings can do that in golf.”

“I didn’t start very well. I saved par on the first, made a nice par on the second, then pushed my driver in the bushes on the third and didn’t find it,” said Skarpnord. “After that I played a bit better, I didn’t putt as well as I did yesterday, but it was pretty steady.”

Five players are tied for fifth on 10-under-par heading into the final round including 2021 Race to Costa del Sol leader Atthaya Thitikul and Swiss amateur Elena Moosmann.

Thitikul was one of six players to shoot six-under for the day and move herself up the leaderboard, while Moosmann is enjoying playing on her local course.

“The course was in great shape again. I didn’t putt that well today compared to yesterday. I can’t put into words how much I’m enjoying it – it is a lot. I wasn’t expecting that many people to be watching, it is really nice. I just want to have fun tomorrow and let’s see what happens,” said the 19-year-old.

Round two was completed on Saturday morning, the cut fell at +1 with 75 players making it through to the final day.