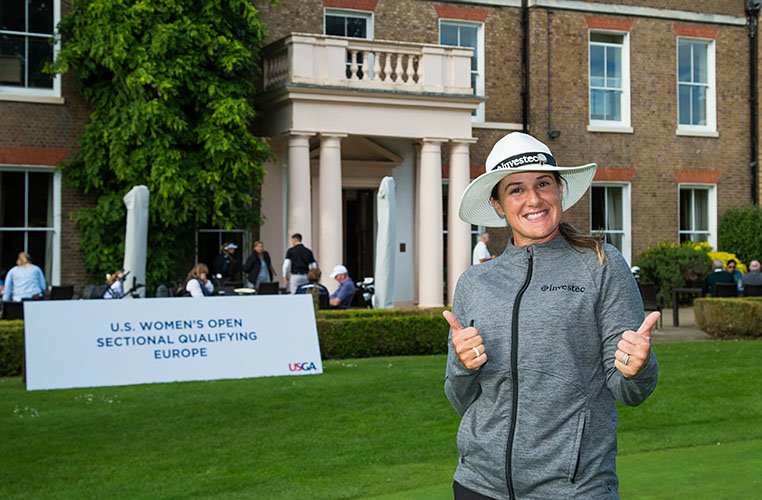 Garcia, 31, from Kempton Park in South Africa, carded rounds of 70 and 69 for a 36-hole total of 139, five-under-par, at Buckinghamshire Golf Club, the LET headquarters, near London.

Smilla Tarning Soenderby from Denmark finished on a total of 142, two-under-par, to earn her place in this year’s Major Championship, before Lydia Hall, from Wales, earned the third and final spot at the fifth extra hole in a five-way play-off.

Five players finished at level-par, 144. They were Amelia Garvey from New Zealand, Olivia Mehaffey from Northern Ireland, Luna Sobron Galmes from Spain, Emily Kristine Pedersen from Denmark and Hall, who had previously won the ISPS Handa British Masters at the Buckinghamshire 10 years ago, in 2012.

Mehaffey was knocked out on the first extra hole and Garvey and Pedersen played for the second alternate spot. Hall and Sobron Galmes played the ninth four more times late into the evening.

Garcia will make her third appearance in the Championship, having qualified by tying for second at Buckinghamshire Golf Club in 2014. In 2021, she finished tied for third in the Investec South African Women’s Open to earn her place in the field.

“It feels really good. I have qualified here before so I had a good feeling and I’m looking forward to having another chance at the U.S. Open,” said Garcia, a three-time winner on the Sunshine Ladies Tour, who was beset by a hip injury requiring surgery in 2020. “I’m a little bit nervous because last time I played the US Open it was my third event back after almost two years off. I love being at the US Open. You play against the best players in the world and learn from them. Hopefully this year will go a lot better.”

Tarning Soenderby, 21, has only just turned professional will make her Major Championship debut in the U.S. Women’s Open. She said: “It feels surreal. I was very, very calm in the first round and didn’t look at scoreboards or my phone in between the rounds. I went out in the afternoon and was a bit more nervous and tried a bit more. I managed to handle it well until the last two holes and then I got really nervous. I knew I was close. My caddie helped me to make the right decisions and rein it in a little. I played solid golf in the second round as well. I knew my golf was close to something very, very good.”

After flying back from Thailand the previous day, having played in the Aramco Team Series – Bangkok, Hall said: “It means the world. I’ve never played a US Women’s Open and it’s been a goal of mine for 15 years. After 41 holes today, a lot of 5-irons into that last hole, I’m really happy to get it done. I just hope to perform as well as I can, make the cut is the bottom line, but I’ll see the golf course and if it suits me and go from there.”

There have been a record total of 1,874 entries overall, including 12 champions and 24 of the top 25 players in the world, following the news that the purse has been elevated to US$10 million for the first time this year.

Three-time champion Annika Sorenstam, 51, who has competed in 15 U.S. Women’s Open, most recently at Interlachen Country Club in 2008, earned a place in the field by winning the 2021 U.S. Senior Women’s Open last August at Brooklawn Country Club in Fairfield, Connecticut, in her championship debut. She will appear 14 years after her last competitive start in the Championship. Last year, Yuka Saso, of the Philippines, edged Nasa Hataoka, of Japan, in a three-hole playoff to win the championship at The Olympic Club (Lake Course) in San Francisco, Calif. Saso matched Inbee Park to the exact day as the youngest champion in U.S. Women’s Open history at 19 years, 11 months, 17 days.