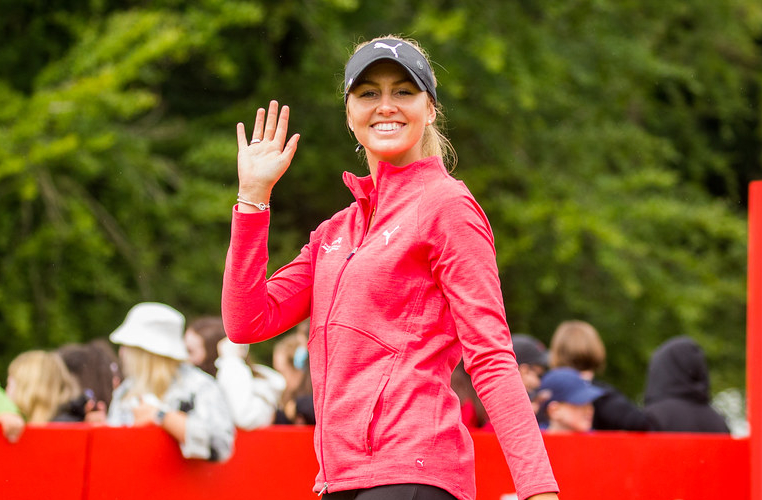 Olivia Cowan was always destined to be a professional golfer.

With a golf coach for a dad and a mum who worked in the club shop at Golfclub Barbarossa in Kaiserslautern as a child, life with a club in hand started earlier than most for the aspiring talent.

Schooldays would often end with evenings at the course, where homework would rapidly be completed, before Cowan and her brother would spend countless hours playing on the range – with the German first picking up the clubs at the age of three.

The hours of practice soon turned into days, weeks, months and years, as her game continued to be honed and perfected, and by the time her age hit double figures her handicap was dropping like a stone.

But even at such a tender age, the constant practice wasn’t enough for her – she needed people to pit her wits against and dad Andrew helped her to bring out the best in her game – although not always in the conventional manner.

“I would say I was always competing, from the age of ten it probably became more serious, but I was always trying to play in every event I could get in,” Cowan recalled.

“I didn’t really like practising I just loved playing tournaments, so I would play everything I could go in. I needed someone to play against or someone to beat.

“I always had little side bets with my dad as well, so that would make me want to do better.”

That drive to perform day in, day out, is an inherent trait in golfers – often searching for a perfection that is so seldom found – and Cowan has known no different for the last decade.

From victory in the under-14s German Girls’ National Championship in 2010, to her five tournament wins in 2015, the Homburg-born star was making a name for herself from an early age in the sport – not just at home but around the continent.

Success at the 2011 Luxembourg Ladies International Amateur Championship and 2013 German Ladies National Championship saw the teenager rise to prominence, before missing out on joining the LET at Q-school in 2014.

At the age of 18, many players would have been knocked back by missing out on the coveted prize of a place on Tour, but the setback only made Cowan more determined to succeed, and she came back with a vengeance in 2015.

With trophy after trophy coming her way, it was time for her dream to become reality as she left her amateur status left behind – and what better way to celebrate turning professional than another LETAS title?

This time it was at the Norrporten Ladies Open after another dazzling display, which paved the way for her to finish top of the Order of Merit and secure her LET card, and from there she hasn’t looked back.

“It was insane, it was the best year ever! It was a great feeling,” Cowan continues.

“I won the under-14s event, and then I played national events, then got into the national team, and it progressed from there.

“I was playing so steady and getting better and better, that I eventually went into the professional route.

“You obviously hope that you will turn professional, but once you get there you don’t know how it’s going to be, so I’m glad that I’m playing quite well on tour.

“Back then I was more into taking risks and didn’t really care about the outcome, whereas now I focus too much on what my score is and how I’m doing in the event, and I just want to get back to my younger self – just hitting a golf ball and having fun.”

Since making her breakthrough in the 2016 season, Cowan has been something of a perennial bridesmaid, with her maiden LET win still eluding her – but not for the want of trying.

Despite challenging at the top of leaderboards throughout her career, that first solo trophy on Tour has always remained just outside of her grasp.

The final day can see even the strongest of golfers’ hopes diminish within a second, with an inerrant shot dissipating the momentum of a round, and even a tournament – something which Cowan knows as much as anyone.

This year’s Jabra Ladies Open saw the 25-year-old share the lead with Annabel Dimmock heading into the final day in Evian-les-Bains, but a run of three bogeys in as many holes after the turn saw her hopes of lifting the trophy disappear in an instant, as she eventually finished two shots behind the leading pair of Dimmock and eventual winner Pia Babnik.

And despite that first win still being out of reach, she still has hopes of finishing top of the pile in the future.

“It does get frustrating, but it makes you want it even more. Sometimes I just need to chill a bit and just play golf and not think about it, and if I play well it will happen,” she said.

“Golf is mad, you could play the best round of your life one day and the worst the next, you just don’t know what’s going to happen.

“I would say mentality is 90% of the game, obviously you need to hit good shots but your head just makes you do different things.

“I’ve come second quite a few times, and that was obviously down to mentality – I don’t really know what happens that day, it’s something I’m still trying to figure out.”

But 2021 has shown that Cowan has exactly what it takes to get herself over the line in an LET event, and they don’t come much bigger than the Aramco Team Series, where she took home the spoils earlier this year at the London event, staged at the Centurion Club.

Alongside best friend Sarina Schmidt, Diksha Dagar and amateur Andrew Kelsey, she finally managed to get her hands on the silverware earlier this year after a pulsating affair that went down to the wire.

“That whole week was just so special because we had a lot of support and being in a team with Sarina as well because we’re obviously good friends,” Cowan remembers.

“We said from the start that it doesn’t matter how we play, we’re just going to go there and have a good week, and that’s what we did and we ended up winning.

After finishing day two top of the standings, things were faltering at the beginning of the final day, with the putts that had been rolling in all week suddenly failing to drop.

Things could have easily crumbled at that point, but a bit of magic from the German maestro on the 13th changed everything – as she holed out to claim an eagle on the par-five and pull the tide firmly in her team’s favour.

Cometh the hour, cometh the woman, and from there on in the shackles seemed to be off, with her team banishing their nerves and producing the goods to claim the win, leaving an emotional Cowan in tears as she lifted the trophy aloft with her teammates.

And now she has experienced that winning feeling, she is champing at the bit to feel that ecstasy once again.

“That eagle was cool, it was what we needed as well because the putts weren’t dropping on the first nine holes, but they started to drop from eleven onwards, so that was exactly what we needed and we pushed on from there,” she remarked.

“It was an unreal feeling, we knew we had to make more birdies as well, and it wasn’t over until the 18th and the last putt dropped, so it was really cool.

“It’s an amazing feeling, it’s gone so fast though. It feels like I did it years ago but it was only a few months ago, so you just want to feel that feeling again.

“We’re just here to win aren’t we, that’s what everyone’s here to do every week.”

The ability to stand back and take it all in and not get consumed by every shot, but still maintain that unrepentant drive to win is sacred ground for an elite player – where the pathway of a career can hang in the balance every week.

Luckily, Cowan has a strong support team around her; with dad Andrew always on hand to lend any coaching tips, while partner Todd Clements can empathise as he carves out a career on the European Tour himself.

“He (Todd) understands it all, which is nice that I can talk to him about it and he knows what I’m going through so he can relate,” Cowan admits.

“You figure out what suits you the best when you’ve been on Tour for a while, and everyone’s different. Some people will be here all day and some will be here for a few hours and go back.

“I think I’m taking it more easy than I did at the start of my career, because I’m trying to focus my energy on the bits I really need to.

“I’m not on the range for hours and hours, I arrive a day later to tournaments now – figure out my strategy and go out there and do my thing.”

One look at the German’s social media pages will show that while she is competing at the top end of the Race to Costa del Sol standings, she still makes time to enjoy herself along the way.

While that competitive edge has never left her, the ability to switch it on and off is something that has helped since turning professional, with the added perspective helping her game on course.

A self-imposed three week break through August and September saw Cowan return revitalised ahead of the end of season run-in, and she admits breaking up a frantic LET season made all the difference for the final events of the year.

“I wouldn’t say golf is 24/7 for me, I love golf but I love to have a life outside it. For me that’s quite important and it’s also what makes me want to come back to golf as well,” she explains.

“That’s why I think that three-week break was good for me, we’ve had so many events one after each other and it can be 24/7.

“I just spent it catching up with friends and family really, even if it’s just going out for a meal, just simple things – that’s what gets my mind off it. “It’s so important to take a break, because obviously I want to do well and I want to win, but I need to think of my physical and mental health, and sometimes you just need a break, and it’s important for people to remember that.”