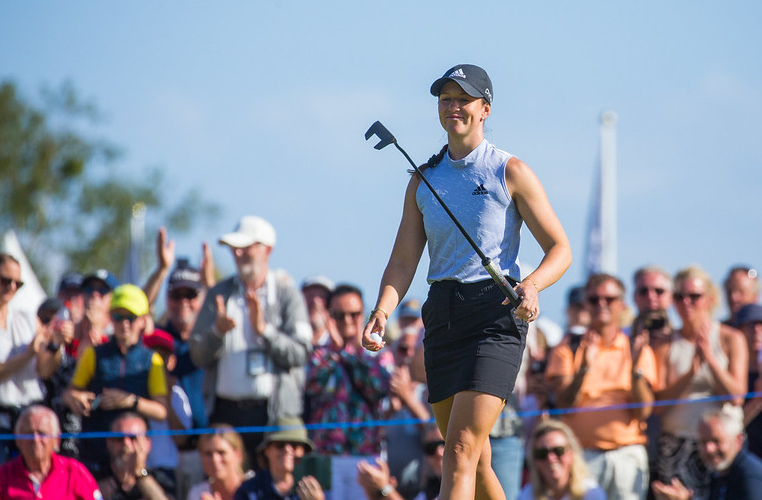 Sweden’s Linn Grant continued her excellent form and fired a round of 66 (-6) to climb to the top of the leaderboard with one round remaining at the Volvo Car Scandinavian Mixed.

The 22-year-old began the day two shots behind leader Jason Scrivener on 10-under but soon rolled in back-to-back birdies on three and four.

A sensational eagle putt on 11 put her firmly within reach of the lead before birdies on 15 and 18 ensured the two-time LET winner put her at the top of the table on 16-under-par.

“It was a very solid day again,” said the LET rookie. “I really found my swing yesterday on the range and this morning was a good warm up, a bit stressed, but that is pretty much a good thing to me.

“I got out there and hit good drives, I think I hit pretty much every fairway, on the greens and solid putting. I think I practised throughout all my years playing as an amateur being in the same situation of being nervous and knowing how to handle that and get the best out of myself.”

The Volvo Car Scandinavian Mixed is a co-sanctioned event between the LET and DP World Tour and it sees 78 men and 78 women playing for the same prize fund of US $2 million and one trophy.

And Grant is flying the flag for the women, having played in the tournament last year as an amateur when she finished T18.

She added: “I think it is fun, I am here to do my golf and I hope that takes me all the way and if it does, then I’ll take it for the women. I hope that people realise that we’re actually getting there, getting close to the guys and having the same journey the men have had for the last thirty or forty years.

“To really just put women’s golf on the map a little bit more than it is at the moment, we can hit it far enough and close to the pin and hole some putts and do good scoring.”

Australia’s Scrivener started the day at the top of the pile on 12-under and extended his advantage with birdies on holes two, five and six.

A dropped shot on eight was no trouble as he immediately responded with a birdie on nine but after finding the water on 16, which resulted in a double bogey, the 33-year-old was glad to finish with a birdie and move to outright second place on 14-under-par.

“A bit of everything really,” he said. “It was looking like a pretty good round up until the 13 or 14 really, I played nicely and then was a bit scrappy coming in, but all in all pretty happy with it.

“I can’t wait. It is a great opportunity tomorrow to win a tournament and to be in the final group is always nice as well.”

Swedish icon Henrik Stenson produced a third round of 67 (-5) to move into contention after beginning his round with four birdies in five holes.

The 2023 European Ryder Cup captain dropped shots on 11 and 14 but rolled in three more birdies on day three on holes eight, 16 and 18.

“It was a bit up and down again. We got off to a blistering start, probably could have been one or two shots better on the front nine, I had decent looks on a lot of holes, so a very good start,” said Stenson.

“I had a bit of a hiccup on 11, I was in a good position, I just hit an awful swing with a four wood and rattled into the trees right and didn’t really follow it up with too much quality either with the next few shots, so walked away with a bogey on that par five.

“Then a couple good pars on 12 and 13 and again a bad tee shot on 14 and followed that up by wrapping it in the trees, and in the end I had to make a six or seven footer for a bogey, so if there ever is a good six I guess I made that one on 14, and then made a couple nice putts on the last few holes with 16 being the highlight of the day.

“It would be sweet, so I better stay away from making six on the par fives right, but I feel like I got myself back in the ball game at least with those late birdies. I would love to win in Sweden, but I really have to do my part tomorrow.”

Spain’s Sebastian Garcia Rodriguez signed for a round of 67 (-5) to move to 12-under-par heading into the final round.