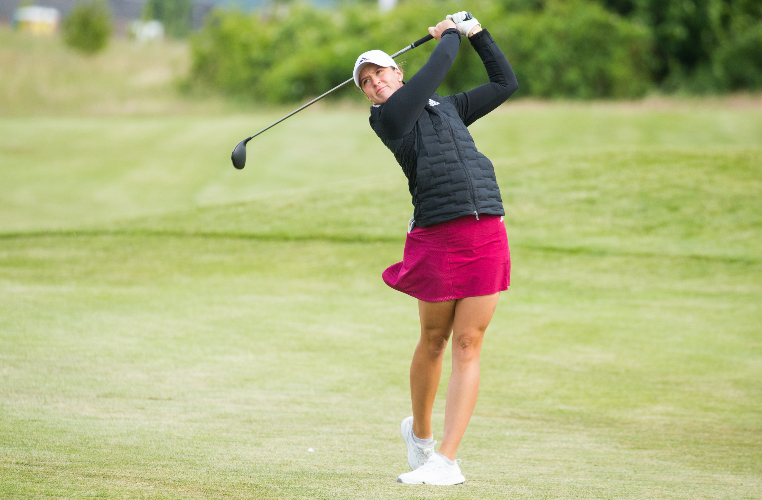 Linn Grant carded a round of 68 (-4) on day two of the Mithra Belgian Ladies Open and holds a three-stroke lead with one round of competition left.

The Swedish star, who led overnight, had another excellent day at Naxhelet Golf Club rolling in three birdies on her front nine to make the turn in 33 (-3).

Two more birdies put the 22-year-old in a commanding position, before she dropped her first shot of the week on her last hole, but the Joburg Ladies Open champion still leads by three strokes with a total of 10-under-par.

“It was a nice round, there was more wind today, but I still played some good golf and there were a few less putts going in,” said the 2017 PING Junior Solheim Cup player. “I still scored good on the par-fives and managed to keep the bogeys away until the last hole.

“I have kept my eye on the leaderboard to see how it is going. I like to be in a leading position or if there’s people behind me in the hunt, I like to know I am leading and by how many shots. I will try and do my own thing and see how far that takes me.”

Spain’s Luna Sobron Galmes and Switzerland’s Morgane Metraux sit in a tie for second place on seven-under-par having fired rounds of 67 and 65, respectively.

Sobron had another dropped shot on 11 but made up for it with a birdie on 14 to seal a round of 67 and be in contention for the final day.

“I played really well. I missed just four greens and my putter was really hot. I made a lot of birdies, so I was really happy with my round today,” she said.

“I have the chance of a good finish. I am going to be focused on that and to play my game and have a good day tomorrow.”

And it was an excellent day for Metraux, who produced the best round of the week, as she moved herself up the leaderboard.

“I am really happy with that score,” said Metraux, who won the 2021 Island Resort Championship on the Epson Tour. “I didn’t hole any putts yesterday and they just happened to go in today. That was the biggest difference.

“I have been feeling like my game has been really close for a while now, I have been working a lot on it since winter and it really has made some strides technically, but it hasn’t really shown in the scores, so it is good to final have a low round and have it show in the tournaments.

“I love my position. I prefer trailing better than leading as there is less pressure. I’m just going to go out and do my best and see where that puts me.”

Finland’s Elina Nummenpaa and England’s Cara Gainer sit one shot further back in a share of fourth place on six-under-par.

Nummenpaa carded a 68 (-4) while Gainer signed for a 67 (-5) as they both moved up the leaderboard on the second day of competition.

“I just played shot by shot, it is windy out there and you have to stay present – that is all I was really doing,” said the Finn.

“I felt I wasn’t hitting it great and I wasn’t absolutely fantastic off the tee, but I felt like everything was going alright. I wasn’t missing it a lot and I felt happy around the greens.”

Gainer explained: “I’m really happy with 15 holes of my round, which were really solid, and I putted great. Unfortunately, there were two three-putts at the end which let two shots slide, but other than that really pleased and looking forward to tomorrow.”

South African Lee-Anne Pace is in sixth place on five-under-par, with a trio of players one shot further back including 2022 Race to Costa del Sol leader Maja Stark plus Argentina’s Magdalena Simmermacher and France’s Anne-Charlotte Mora.

Eleven players are tied for 10th place on three-under-par and the cut fell at +3 with 68 players making it through to the final day of competition at Naxhelet Golf Club.