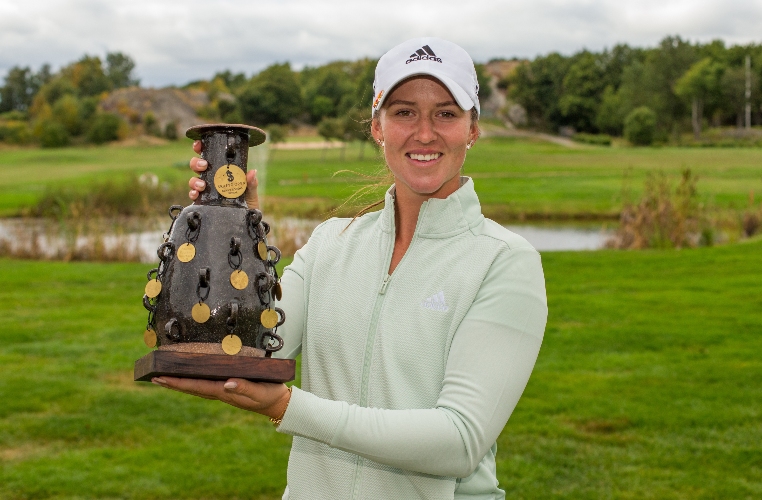 Linn Grant won her fourth LET title of the season with back-to-back birdies on her final two holes enough to earn her the Didriksons Skaftö Open title.

The Volvo Car Scandinavian Mixed champion turned on the style in front of her home crowd once again on the Swedish West Coast, as she pulled some magnificent shots out the bag on the final stretch to see off compatriot Lisa Pettersson by a single shot.

It was something of an up and down day for Grant up until then, with two three-putts on the 11th and 15th to see her give the chasing pack some hope, but she kept her cool to ease herded back to the top as the round drew to a close.

The 23-year-old had a two shot lead at the turn before dropping those shots, and she was delighted to finally get over the line at the end.

“It was exhausting, it was a rollercoaster today, I felt I started off a bit shaky. I missed some birdies on the par fives but then got myself on a good setup after nine,” she said.

“I did some bad three putts then finished off with two birdies, so it was a very up and down day.

“My short game was both really good and really bad today, I managed to hit some really bad ones first then saved them up for the end when I nearly holed two or three.”

As is ever the case when Grant runs out victorious in an LET event, she was in a share of the lead heading into the final day, with Ana Peláez Trevino for company on -9 before the action got underway.

But after a dropped shot on the second there were a number of competitors for top spot, with as many as five players tied for the lead at one point in the afternoon, before birdies on seven and eight put the Swede back into the ascendency.

But the double-bogey on 11 soon saw the field pull back into contention, as the home favourite looked to be playing herself into trouble.

A birdie and bogey on 14 and 15 respectively saw her head into the last three holes a shot behind clubhouse leader Lisa Pettersson, who proved her decision to focus on European golf to be the correct one as she ended on -9for the week.

But as the old adage goes – form is temporary and class is permanent – and Grant proved that after a tremendous tee shot on the 17th to give herself a short putt for birdie to also bring herself to nine-under, before saving the best until last on the 18th.

With the galleries simmering away behind the final green, Grant almost reached the dance floor with her tee shot – instead landing in the green side bunker – before putting her effort from the sand inches from the hole to leave herself the simple task of rolling in a deciding birdie.

And after such a nail-biting final day, Grant was delighted to put on a show for the home fans who turned out to watch this afternoon.

“Just like the Scandinavian Mixed it’s always good to win at home and I always really enjoy playing here, it really reminds me of playing amateur golf.”

It was another strong showing from Pettersson on the final day, who has reaped the rewards from deciding to focus on the LET for the remainder of the season after a summer break.

The Swede birdied three of her first five holes – while dropping a shot on the third – to put herself into contention in the early stages, before bouncing back from another dropped shot on ten with birdies on 14 and 16.

That set the clubhouse lead on -9 as the final groups came down the stretch, and despite missing out on the victory, she was pleased with how her game was trending this week.

“I didn’t really have any expectations this week, I just wanted to go out and play my best and that’s what I did today. Obviously you always want to win but I’m really happy with my performance anyway,” she said.

“I’ve had a tough season mixing the Epson Tour and LET, and felt if I kept playing the same way I would lose both cards, so I’ve put all my energy in this tour now and save on travelling and putting less pressure on myself.

“I’m glad I made that decision and it obviously feels like the right one now. I’m really happy that it all worked out and I can finally build my confidence up again.”

Maja Stark and Becky Morgan both produced rounds of 65 (-4) to move themselves into a share of third on -8 overall on Sunday, as they finished alongside England’s Alice Hewson who shot 67 (-2) in her final 18 holes.

In total five players finished on -8 after all was said and done, with Jessica Karlsson making it four Swedes within two shots of victory after a final day 67, while Elina Nummenpaa went round in level-par to achieve her highest ever finish on the LET.

In the Race to Costa Del Sol, Maja Stark retains her lead at the top of the standings, but her lead was cut to just 158.73 points, with Grant’s victory keeping things very interesting as we reach the climax of the 2022 season.