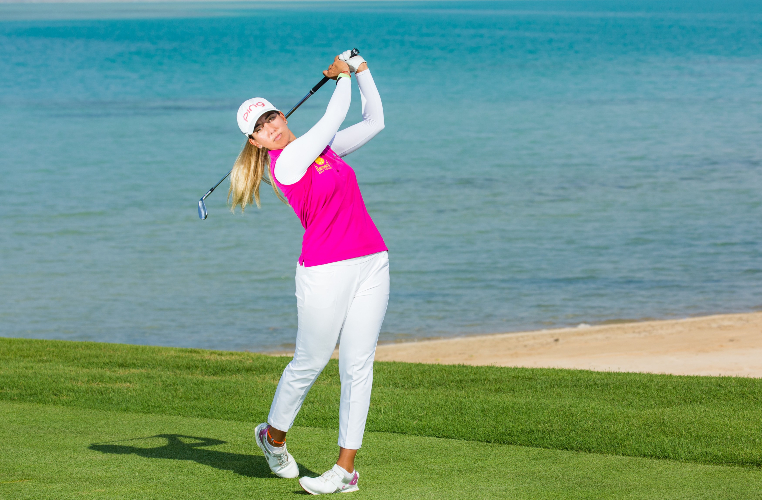 In a week of firsts, Moroccan professional golfer Maha Haddioui continues to make LET history, flying her country’s flag as the first Arabic woman to compete in Saudi Arabia at the inaugural Aramco Saudi Ladies International presented by PIF International gets underway from 12-15 November.

Hosted at Royal Greens Golf & Country Club, which staged the first two men’s tournaments on the European Tour, Haddioui is well-known on the LET as the first Arabic golfer to gain playing privileges after turning professional back in 2012 and has enjoyed as many as 101 tournaments, but never before did she believe she would compete in Saudi Arabia.

“I am really happy to be here in Saudi Arabia and play in a new event on the LET schedule. I am really pleased and proud to represent my region. It’s a big tournament, a big statement and it’s positive to see women’s golf get more recognition and the prize fund is a huge statement from Golf Saudi.”

Speaking of statements, the prize fund this week is the largest of the season, with the world-class 108 player field competing for $1 million with a further $500,000 on offer next week at the inaugural Saudi Ladies Team International.

Getting closer to achieving her dream of becoming an LET champion, the Moroccan trailblazer who grew up competing against mostly men and fell in love watching the sport at the Lalla Maryem Cup,

has already recorded three top-15 finishes in 2020 as well as featuring in the final group in Switzerland after a second round of 65.

Hoping to inspire the next generation of women, the 32-year-old has three events left on the 2020 schedule, as she looks to make a late push in the Race to Costa del Sol standings.

“Winning anywhere would be special but it would mean a lot more to happen here in an Arab country. I love the course, I love the place and feel really welcome here. I am so grateful to be able to have picked up the game and it has changed my life, I’d love for other Arab women to be able to pursue this and enjoy the opportunities that I have had.”

She continued, “Saudi is opening up to the world of golf and it is going to help grow the game, which I am happy about. I can’t wait to get started on Thursday.”

Haddioui gets her campaign underway with Finland’s Ursula Wikstrom and Sweden’s Camilla Lennarth at 7.34am from the tenth tee – follow her progress HERE