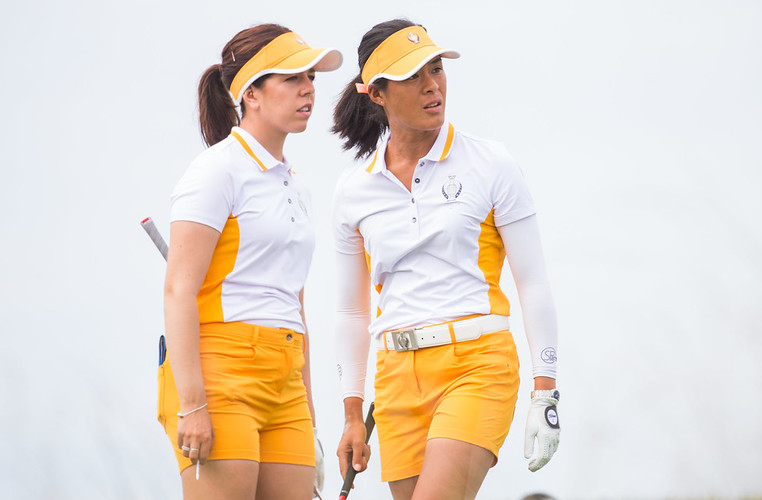 European Solheim Cup captain Catriona Matthew stuck with a star pairing from Gleneagles as the Saturday morning foursomes were announced.

France’s Celine Boutier and England’s Georgia Hall, who went undefeated in Scotland in 2019, are together again and will face Ally Ewing and Megan Khang in the second match.

Matthew said: “I have been thinking of potential pairings and obviously Celine and Georgia did so well at Gleneagles. That was an obvious one that we were going to certainly try and put out again this time.”

Two rookies will make their Solheim Cup debuts on Saturday with Finland’s Matilda Castren and Ireland’s Leona Maguire both getting their first taste of the competition.

Having the honour of kicking off the morning session will be Sweden’s Anna Nordqvist alongside Castren, as they go up against Danielle Kang and Austin Ernst.

Nordqvist comes into the 2021 Solheim Cup fresh off the back of her AIG Women’s Open victory while Castren has triumphed on the LPGA Tour and LET in recent months.

“With Anna coming off her victory at the AIG Women’s Open, she is champing at the bit, she is super confident, and we wanted her to lead the team out. Matilda has been playing really well winning on both Tours. I think that’s a really strong pairing and we have great confidence in her,” explained Matthew.

Another European rookie who is set to make their mark is Maguire, who will be playing alongside Mel Reid, and the duo will battle it out against sisters Nelly and Jessica Korda.

“Leona is another player on our team who has been playing really well on the LPGA. She just reallt trots results out every week and we have every confidence in them to keep going out and doing what they have been doing week in, week out on Tour,” said the European captain.

“We have a strong team, but we’re certainly not underestimating the Americans. They have got a great team as well, it’s a very strong team and on home soil. We are confident with our team, but we know we are going to have a real fight on our hands.”