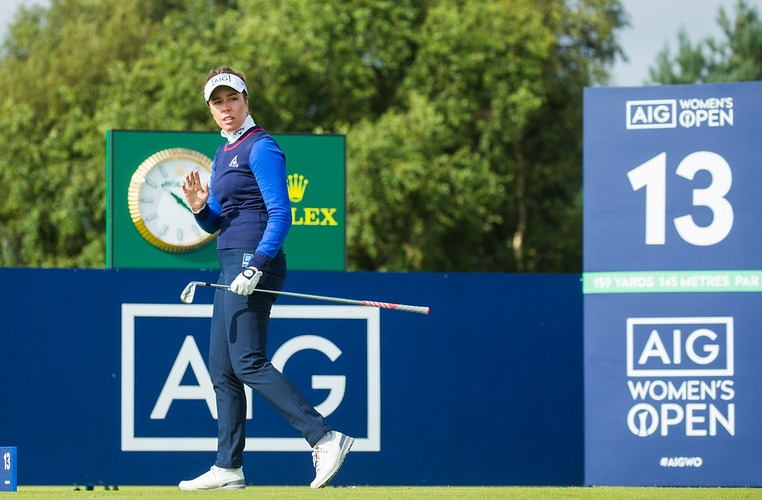 England’s Georgia Hall produced another solid day at the AIG Women’s Open, shooting a round of 69 to be a co-leader at the halfway stage.

The 2018 Women’s Open champion backed up her first round of 68 with another round in the 60s to put her on seven-under-par for the tournament.

Hall made the turn in 33 having rolled in three birdies on the fourth, fifth and seventh holes, an even-par back nine where she made three more birdies saw her share the clubhouse lead.

“Every Open I want to do the best I can. I got off to a good start after I was defending at Woburn after two rounds. This is a fantastic golf course, one of the best in the world, a lot of golf to play yet but I’m happy where I am,” said the European Solheim Cup star.

“There were loads of people and it’s so nice and it does mean a lot that they are supporting me and Louise [Duncan], who I was playing with, and hopefully we’ll see more tomorrow because it does keep me going.”

Alongside Hall is Mina Harigae, who fired a round of 67, and made the most of calmer morning conditions to set the clubhouse lead on seven-under-par.

The American rolled in three birdies and one bogey on the front nine, before making four further birdies and dropping one shot on the back nine.

“I’m definitely delighted with that, especially here at Carnoustie. I think 18 was a highlight for me. It’s such a hard hole. I had a 4-hybrid in, and you have to hit really good shots. I think it’s a great birdie on that tough hole,” said Harigae.

“It looked like there was going to be rain but definitely was a little softer out there and I thought it was a little more breezy than when I played yesterday afternoon. I didn’t think it was easy conditions, but also I know it can be a lot tougher.”

One stroke behind the leaders and tied for third place are American Lizette Salas and South Korea’s Sei Young Kim, who produced rounds of 69 and 71, respectively.

Kim said: “I think we got pretty lucky with the weather today. We got a bit of drizzle. I mean, I would take this for four days. It’s nice but it’s tough out there, like it’s so narrow and I wasn’t hitting the ball very well which I think one-under is the best score I could shoot today. I got lucky on 15 and holed out. It’s always nice when a couple under you have like five, that last four-hole stretch, because it’s very tough.”

Six players are tied for fifth on five-under-par heading into the weekend including Ireland’s Leona Maguire who fired a bogey-free round of 67 to move herself into contention.

“I felt like I played really solid. I didn’t feel like I did a whole lot wrong yesterday, I just didn’t hole any putts. I spent a lot of time last night working on my putting and my stroke and got off to a really nice start today. It was nice to get a few birdies early and turn in under par and take advantage of the two par 5s coming in,” said Maguire.

“Carnoustie is a proper golf course. It doesn’t really matter what the weather is. There are tee shots out there you just have to stand up and hit a really good shot and for the most part I’ve done that over the last two days, stayed out of all the fairway bunkers there, which was key, and you just have to pick your shots and execute really well.”

It is a congested leaderboard with a lot of players still with a chance with two rounds remaining, six players are three shots adrift with six more players four shots back.

American Megan Khang produced the round of the day carding a 66 (-6) to move to one-under-par for the tournament. The cut fell at +1 with 66 players making it through to the weekend.