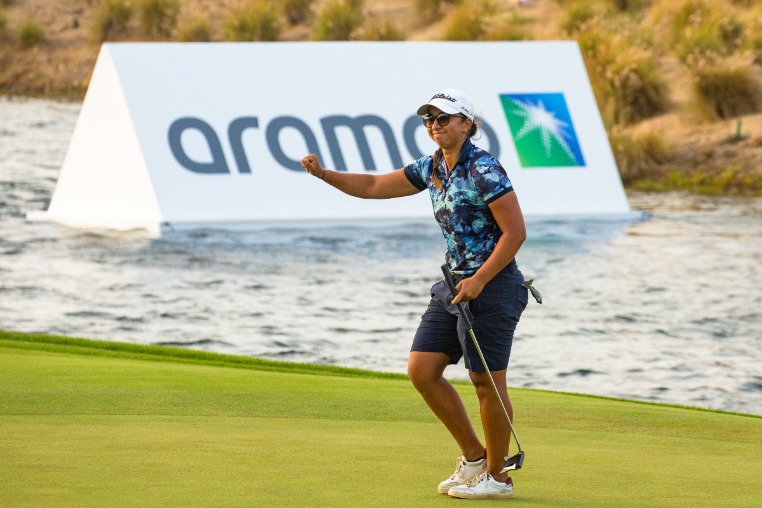 England’s Georgia Hall and Czech rookie Kristyna Napoleaova are tied at the top on six-under-par at the halfway point of the Aramco Saudi Ladies International presented by Public Investment Fund.

Hall, who shared the overnight lead alongside Sophie Witt, got off to a hot start with three consecutive birdies on holes 11 through to 13 and made the turn in 33 (-3).

As the wind started to pick up at the end of the morning, Hall made another birdie on the fourth but dropped a shot on the sixth to sign for a round of 69 and sit at six-under-par.

“The pins were a little trickier actually than yesterday. I’m pretty pleased with the way I played,” said the two-time Solheim Cup winner. “I was kind of just plodding around and it was a much steadier round today. I’ll take that into the weekend.

Napoleaova faced the tougher afternoon conditions on day two but breezed through her round firing a bogey-free 66 (-6) – one of three players to do so – to be level with Hall.

After an eagle on the fourth, the former footballer rolled in birdies on seven, nine and 13 before finishing her day with a flourish on 18 to seal a career-best round.

“It was a really good round. Even yesterday I felt like the course is running really well and the greens are pure. I feel this is exactly for me – apart from the wind,” said Napoleaova, who only began playing golf six years ago.

“I have a local caddie and we are from the same academy, so he walked me through it. It was really his help throughout; I was chilling out and not thinking about anything.

“I’m honoured to be in that group tomorrow. It’s going to be a lot of fun and I feel like I can learn a lot from these two, especially as they are incredible players. I’m enjoying every single minute of being here this week.”

“It was probably one of the best three-under-pars of my career. Not one shot was easy out there, overall, I’m very pleased,” said the Dutch star.

“I hit a lot of good shots and actually created some good chances and holed a few good par putts. It was a good grind.”

Australia’s Steph Kyriacou also fired a 66 (-6) to climb up to fourth in the leaderboard as she began the day on three-over, but kickstarted her round with an eagle on the 13th before dropping a shot on the following hole.

However, it was her back nine where the two-time LET winner made inroads as she rolled in five birdies to put herself on three-under-par for the tournament and in a good position heading into the weekend.

“I hit good shots yesterday, but they would finish like 30 metres away from the pin,” said the 21-year-old, who finished third in last season’s Race to Costa del Sol.

“I hit good shots today and because there wasn’t much wind, I could actually hit them close and give myself chances.”

Sweden’s Anna Nordqvist shot a level-par round of 72 to sit in fifth place on two-under while three players are in a share of sixth place.

One of those is South Africa’s Lee-Anne Pace, who carded a bogey-free round of 67 (-5), to be alongside Wales’ Chloe Williams and England’s Cloe Frankish.

“We had perfect conditions and I came close to a really low round. I made three birdies in-a-row on the back nine and started nicely and got a bit of confidence,” said the 2010 LET Order of Merit winner.

“I pretty much had chances everywhere. I want to play well this week to prepare for the next two weeks in South Africa. To be hitting the ball like I’ve been hitting it is a great confidence booster.”

The cut fell at +7 with 63 players making it through to the weekend of the Aramco Saudi Ladies International.