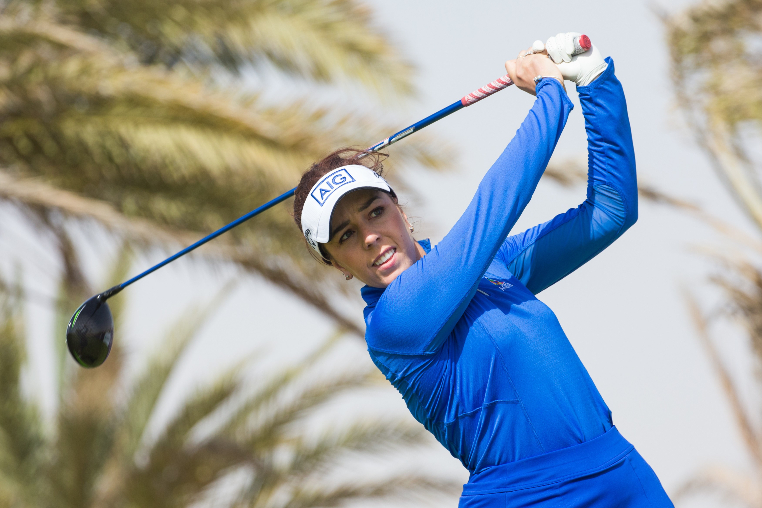 England’s Georgia Hall and Germany’s Sophie Witt fired rounds of 69 (-3) to be tied at the top of the leaderboard on the first day of the Aramco Saudi Ladies International presented by Public Investment Fund.

The wind was a big factor on day one with strong winds throughout, but the morning starters had the better of the conditions with stronger gusts of up to 60 km/h in the afternoon.

One golfer who made light of the conditions later in the day was Major winner Hall, as she was the only player who was able to maintain her challenge at the summit when the wind picked up.

Three consecutive birdies on holes two through four and another on the ninth saw the Englishwoman make the turn in 32 (-4).

In her next eight holes, Hall rolled in three pars, three birdies and two bogeys before finding the water on 18, but a double bogey on the last ensured the two-time Solheim Cup winner was still tied at the top alongside Witt.

“Mentally, I was very strong, it was tough out there. The conditions are the hardest conditions I have ever played in, and I was happy with the way I played in them,” said Hall.

“I putted really well and holed some good putts for par which is very crucial. I stayed patient, I have done the best I could, and I was really proud of that.

“I tried to go for it on 18 and had a 6-iron, but it found the water and obviously, it was tough from there. I just need to take the way I played into tomorrow and hopefully it will be calmer tomorrow morning.”

Witt, who is a rookie, posted the best score of the morning to be three-under-par on her first day at Royal Greens Golf & Country Club.

The German began her round with two birdies in her opening three holes before making three bogeys in her next six holes.

“When I hit the green, I made birdie but most times I didn’t hit the fairway or the green so then I had to pitch and putt,” said Witt, who finished T12 at LET Q-School to earn status this year.

“It was a little bit lucky today because I got a good score and made bad shots. When you hit good shots, you can play a good round here and it is possible to score well.

“I told my mum this morning, ‘hopefully I don’t make a 90’ because the last three days I hit so many thin shots.

“I think now I want to make the cut. It’s my rookie season so I want to have fun and enjoy it. I think I can learn so much from the good players in the field and from my playing partners here.”

Three players are in a share of third place on two-under-par with American duo Angel Yin and Lindsey Weaver-Wright alongside Sweden’s Anna Nordqvist.

Last year’s AIG Women’s Open champion Nordqvist was out in front early on having rolled in three birdies and an eagle in her opening 13 holes before dropping a shot on the fifth.

Nordqvist then made a double bogey on the eighth to drop her back to two-under and put her level with Yin and Weaver-Wright.

“I played great today. It was blowing so hard off the back. I have probably never played this course this windy, and it was a different wind,” said the three-time Major champion.

“I feel like I managed my game very well. I made a double on my 17th hole, I thought I hit a really good shot, but the wind took it a little bit.

“It’s hard to stay in it for 18 holes out there. Every shot you’re either flying a 30 or 35 mile an hour side wind out there. I’m happy with my game. It was a solid start. I didn’t feel like it was that easy today.”

Yin had a varied start to her round with three birdies and three bogeys in her first six holes before dropping another on the 18th to make turn in 37.

But the Solheim Cup player had a better back nine with birdies on the second, fourth and ninth to seal an opening 70.

“It was a solid round. I started out rough. I don’t think I made a par until the fifth hole, but I made lots of birdies, saw a lot of opportunity and left a few out there,” said Yin.

“The morning was windy still, but on my back nine which is the front nine, it died down a little bit, so that was quite nice. I think I got a little lucky.”

While Weaver-Wright, who made three birdies and one bogey on her way to a round of 70, was pleased with how she battled in the conditions.

She said: “A lot of the holes were different to what I’ve played here before. It is so windy, and my allergies were not very happy with the wind today. There were some lulls in the wind on my back nine, but it was difficult out there.

“I made some good par saves when I really needed them after missing a couple of greens. It was a pretty stressless round.”

Five players sit in a tie for sixth place on one-under-par including French rookie Charlotte Liautier, who made a hole-in-one on the par-three eighth.

Liautier explained: “It was a very good ball, I just hit my 8-iron and the ball carried to the green and it rolled in after five metres. The wind helped the ball on its way into the hole.”