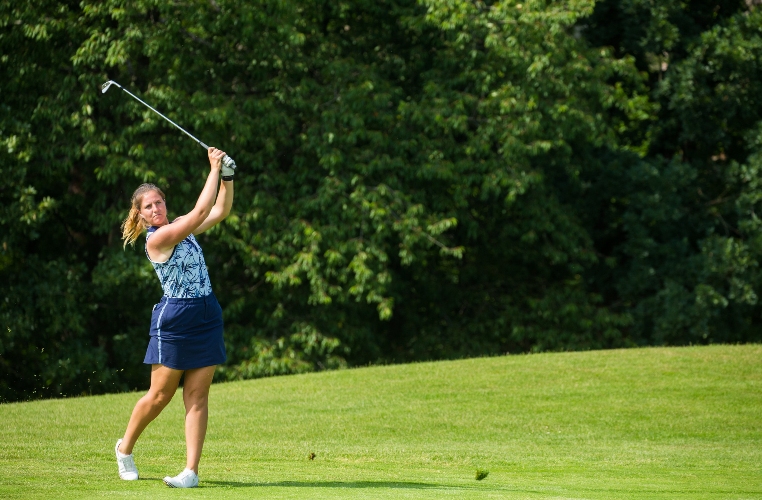 Germany’s Leonie Harm finished in third place at the 2021 edition of the Tipsport Czech Ladies Open and is excited to return to Royal Beroun Golf Club.

And the course brings back good memories for Harm, who produced rounds of 69, 66 and 68 last year, to finish two strokes behind eventual winner Atthaya Thitikul.

“I obviously have great memories of this place, I really love to come and play here,” said the 24-year-old. “I didn’t finish it off well last year, I had a consistent result, but I had a chance to win going into the back nine on the last round.”

“So, this year I’m trying to be smarter and I’m excited for the week and hope I give myself some chances.”

Harm played in both the 2020 and 2021 editions of the tournament and it a venue where she has done well, finishing T20 in her first appearance.

She continued: “I like how this course sits with the eyes; most holes favour a draw off the tee which is what I like to visualise my driver hitting.

“I also like that the greens are undulated, but once you are on the correct side of it you have a good look for birdie, and I like the speed of them so hopefully I can drain some putts this week.”

It has been a consistent season so far for the German, who has made seven cuts in her eight appearances, with a best result of T3 at the Jabra Ladies Open.

And after some hard work over the winter, Harm is pleased with how her game is trending as the season is progressing.

“So far this season I’ve signed for some good scores, but I just haven’t been able to do it consistently, so we’ll see what happens and I have to stay patient,” she explained.

“At the end of last year, I really struggled mentally. I struggled to get my ball in play off the tee, but that part of my game has really improved which I’m really proud of because that’s what my focus was on, and now I’ve just to be patient for the results to show up.”

Harm has built a solid partnership with caddie Alex, who has been on her bag for the past few events in 2022.

She added: “Alex helps me a lot and helps me to think a lot less on the golf course because he offers me the plain fact. We discuss every shot, but we normally agree on what we do, which makes things easier because it gives you the confirmation that what you want to do are reasonable choices.”