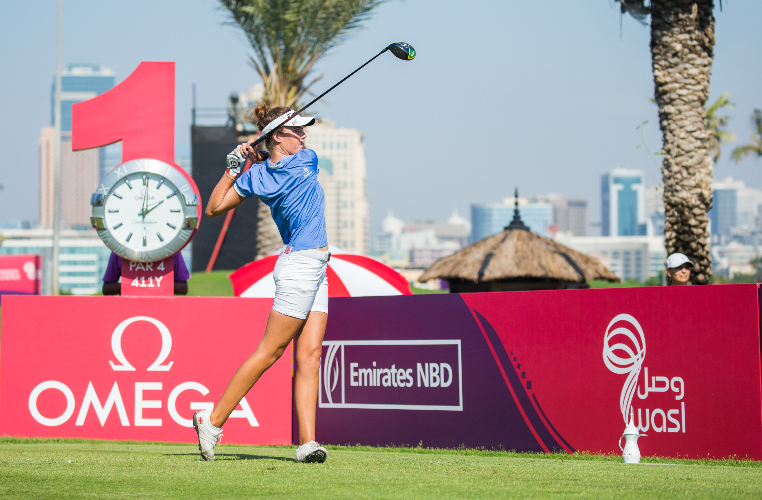 Sweden’s Caroline Hedwall added a bogey-free round of 70 (-2) to yesterday’s effort of 65 (-7) to keep her nose in front of the international leaderboard at the OMEGA Dubai Moonlight Classic.

Leading by one shot from England’s Meghan MacLaren at the end of the morning wave, the Swedish star again looked comfortable tee to green as she returned her second successive bogey-free round.

While there were no hole-in-ones, 16 pars and two birdies ensured she sits atop the leaderboard for now, with the likes of Laura Fuenfstueck and Lydia Ko four and five shots back respectively, as they start their second round under the floodlights.

“I have been playing very steady, hitting a lot of greens and I’ve been good within two metres of the hole. Today I had a lot of putts that didn’t drop so maybe five under would have been a fair score but I’m in a good position for tomorrow and I am happy with my game.”

Chasing a seventh LET title, Hedwall may have looked comfortable all day on the course but the 31-year-old Swede perhaps has the hardest part of her day ahead.

“I am actually studying criminology at the moment to try and get a degree, it is nice to have something to focus on when you are back in the room. It is stressful at times with 100% of the course completed remotely. I’ve been doing lots of essays and I have one to do tonight as the deadline is tomorrow.”

With as many as ten nationalities occupying the top ten as it stands, MacLaren is her nearest challenger, just one-shot back at eight-under-par. While World No. 9 Minjee Lee is lurking at seven-under-par after a sublime 65 (-7), which included a front nine of 30 strokes.

MacLaren added, “I enjoy the conditions here, it’s in great condition and you just have to look around, it’s a great place to be. The good weather is a plus and it’s nice to come back somewhere you’ve been before, I’ve learnt from last year.”

Consistency is key to Lee’s game and she’s recorded a remarkable 52 career top-ten finishes since turning professional in 2015. In search of her first LET win, the Australian may not be studying like Hedwall but is comfortable with having to wait until tomorrow evening to start her final round.

“I don’t mind being inside until tomorrow’s afternoon round because it is so hot out here and I’m just going to trust I’ve done enough practice last week before I came out here. There are a few shows on my Netflix that aren’t available in America such as a few Korean dramas. I felt like I watched all of the American shows while we were in lockdown the first time, so I am happy to see some new options.”

Finland’s Sanna Nuutinen matched Lee’s round-of-the-week 65 to move from +4 to -3 on the leaderboard while American Alison Lee made the most of her LET debut, firing a round of 68 (-4) to move into the top-ten.